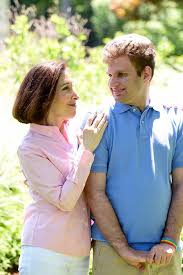 Best quote ever. I learned it from Liane Kupferberg Carter’s latest memoir, Ketchup is my Favorite Vegetable: A Family Grows up with Autism.  This quote isn’t just emblematic of her message, it also exemplifies the kind of thoughtful writing that Carter is a master of.  Let’s face it: family life is filled with so many emotions. On the surface, it may seem like it’s a steady stream of equal parts challenge and the quotidian, but if you stop to think about it mindfully it is punctuated with moments of joy and love. Carter is a skilled writer who knows just how to weave the right amount of thoughtful research with the ups and downs of what it takes to raise an autistic child, while also seeing to everyone else’s needs, including her own. Liane, thank you so much for joining us today.

Maribel Garcia: Your memoir chronicles the whole gamut of sentiments. You take us through the highs of becoming a new mother (the heady smell of your newborn’s head) and walk us through the many challenges that each developmental milestone brings, but you also immerse your readers in a mother’s story of love and her fight to make sure that her kids get everything that they need—especially when you have to negotiate the landmines of the school system. One of your reviewers said it best:

There are points in the story where one feels a mother’s joy and exuberance, yet surprising because the memoir chronicles the whole gamut of emotions: fear, frustration, seething anger, adoration, delight and joy, and two constants: utter exhaustion and unflinching determination, as the family forges its way through the first two decades of life with autism.

Speaking of “range of emotions,” how did you know where and when to start the book, in terms of how it was structured?

Liane Kupferberg Carter: First, thank you so much for such kind words! I really wrestled with how to structure the book, and I had a few false starts before I figured it out. At first, I wanted to write a series of interconnected essays. I knew it was important to “hit the ground running” – to start the story during a moment of high drama to pull the reader right in there with me — but I wasn’t sure whether to structure the book thematically or chronologically. Then I went to a writing conference called “The Art of the Essay,” and one of the panelists pointed out it’s harder to sell a book of essays than a memoir — unless you’re David Sedaris or Joan Didion. It’s the same way with short stories – much easier to sell a novel. Once I decided to go the memoir route, I had to create connective tissue between the essays, to make a cohesive narrative. I decided to tell our story chronologically, though with flashbacks, because I thought it would be easier for readers to follow. What I like about writing memoir is that it’s fact-driven. It gives you the scaffolding for the book, but you still use all the same techniques you use in fiction. You have to make choices about voice, scene, dialogue, characters, pacing, and creating a story arc.

Liane Kupferberg Carter: I’m thrilled at the response!  Many other parents of kids with disabilities say things like, “Your story is my story.” A lot of readers who aren’t personally affected by autism have mentioned that the book reads like fiction, which I take as a compliment – it means they were invested in the story. Many of them have also described the book as a love story.

I think there are few things my book adds to the conversation. When Mickey was first diagnosed, I didn’t know much about autism. It was the early 90s, the Internet was in its infancy. I really needed a book called, “What To Expect When Your Child Is Autistic” but nothing like that existed. All the books I found were written by parents about their young children, and they were all the same: “This is how I cured my kid and you can too.” There was nothing out there about kids who weren’t cured — and nothing at all about raising an older autistic child. So I wrote the book I wish I’d had when Mickey was first diagnosed. My book is not about curing my kid, but I think it’s a hopeful story that shows that it is possible to create an ordinary family life, even when you’re dealing with the extraordinary needs of an autistic child. 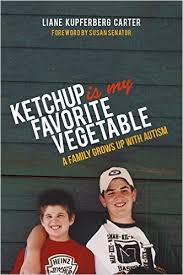 MG: In the memoir, you describe parenthood as something akin to carrying your organs on the outside of your body. So true. As long as you have children, you will worry, monitor their every developmental milestone and then watch them navigate the painful realities of the real world and hope that they can handle it. You remind readers of the additional challenges that parents with children who have special needs have, and I am always appalled by our lack of progress as a society. Yes, there are educational programs and kinder public attitudes, but we are nowhere near where we are supposed to be. What would you like to see happen for children like Mickey? I’m sure there are many things, but what is at the top of that list?

Liane Kupferberg Carter: You’re right, the list is huge. I’d put safety and happiness above everything else. I’d like to see a seismic shift in how we treat people with disabilities in this country. Services for disabled adults are abysmal. It’s something I didn’t think about much when Mickey was a cute little boy. He’s going to be an adult much longer than he was a kid. He had so much available to him when he was in school, but once that little yellow school bus stops coming to your front door, it’s like falling off a cliff. There’s a shocking lack of housing and employment opportunities for him.

You know that famous quote about parenting? “There are only two lasting bequests we can hope to give our children. One of these is roots; the other, wings.” We’ve given Mickey all the grounding and love we have. But what does “wings” mean for him? How do we help him to soar? In many ways, my husband and I have the same hopes for him as we do for Jonathan, our older son who’s neurotypical. I want them to live the most satisfying, independent lives they can, with loving friends, good health, and work that is meaningful to them. But what will Mickey’s future look like? Where will he live? Who will take care of him? Who will love him when we are gone?  Those are the questions that haunt me.

MG: What does Mickey think of the book?

Liane Kupferberg Carter: He likes the idea of it, but has no interest in reading it. Clearly, it doesn’t hold a candle to Harry Potter!

MG: In her wonderful acknowledgments, Susan Senator makes it very clear to readers that this memoir falls under a particular category: non-recovery Autism, something that she had “hungered” for when she was raising her own son. What do you think of people who are still looking for “cures,” or believing that is it getting better with a certain treatment or change in diet?

Liane Kupferberg Carter: I understand totally where they’re coming from because that was me 20 years ago. “Cure” is something you hear mostly from the parents of newly-diagnosed children. Or they’ll talk about “recovering” their kids as if they’d gone missing. Unfortunately, there are a lot of snake oil salesmen out there who peddle pricey, unrealistic hopes to families. It took me a long time to accept that we can’t fix “autism.” It’s hard wired. It’s not a processing error, it’s a different operating system. That said, I’d dearly love to find a cure – maybe “solution” is a less fraught word — for the very real challenges Mickey faces. He has a high level of anxiety, as well as a seizure disorder that’s potentially life-threatening. I desperately want better drugs and therapies. But that doesn’t mean I want to change him. He’s a funny, social, kind-hearted young man. I love who he is. But I do ache to remove the barriers that hold him back from living the fullest, most enjoyable and independent life possible.

MG: It is estimated that nearly 33 percent of people with autism spectrum disorder also have epilepsy. Until I read about this link in your memoir, I was not aware. Is there clinical research which deals with the connection between these two neurological conditions? And how have other families responded to this part of your book?

Liane Kupferberg Carter: Other families tell me I’ve accurately portrayed the fear and uncertainty of life with epilepsy.  I know people who’ve lost children to seizures. It’s like living with terrorism – you never know where or when it could strike, so you’re perpetually in a state of high alert.

There are many studies trying to tease apart the connections between epilepsy and autism. Our family has participated in several.  Usually, all of us give DNA samples; they look for specific gene mutations, they don’t find anything clinically significant, and that’s the end of it. We’ve given a lot of blood and spit over the years! But I’m very psyched about a new one called the Epilepsy Genetics Initiative (EGI).

MB: Liane, thank you so much for being with us today!