The first book(s) I ever published were angsty new adult romance, heavy on the feels. When I was writing Clipped Wings and Inked Armor I reached the heaviest, angstiest parts of the book and basically snot sobbed my way through writing those chapters. It was intense, and when I managed to slog-snot my way to the end of the hard stuff I was exhausted. Emotionally drained from heaviness of the material I was writing.

I also had a newborn baby who didn’t like to sleep for more than two hours at a time. I was sleep deprived and emotional already. Add in all the angst from the story I was writing, and I needed a break. A pallet cleanser if you will.

So I started writing my first romantic comedy. It was a full pendulum swing in the opposite direction. Where Clipped Wings and Inked Armor were an angsty sobfest, what eventually became Pucked was full of over-the-top ridiculousness. It was exactly what I needed to help me manage the heavy.

And it became my “break-out” book, landing me on the New York Times bestsellers list and it sent me down Romantic Comedy Lane. 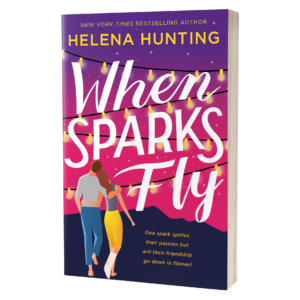 My writing has changed significantly since I wrote the first drafts of both Clipped Wings and Pucked back in 2008-2009. Pucked reads very much like slapstick comedy and the heroine is completely filterless and quirky. Whatever she thinks comes out of her mouth—the good, the bad and the mortifying. When I wrote her, I thought of all the situations we find ourselves in, and if we didn’t have to worry about perception, or feared dying of embarrassment, what would we say in those situations? That’s how Violet Waters was born.

But as I moved forward in my rom com writing, the humor started to shift. I couldn’t create a Violet in every one of my books, she’s one of a kind. Instead, I sought to find a balance between the over-the-top ridiculous and the emotional aspect of the romance that I wanted to write.

Romance has conflict, there are character arcs, there’s heartache and I didn’t want to forget about that just for the sake of writing a funny book.

Shacking Up was my first attempt at trying to find that balance. When I started writing it, I viewed the heroine, Ruby, as a sort of “Violet-light”. She was quirky, funny and did embarrassing things, but she was . . . toned down. Not quite so outlandish in her actions and reactions. And the situations she found herself in were things that could happen in real life, but with a spin.

Imagine stuffing hors d’oeuvres in your purse and forgetting about them until weeks later, when you can’t escape the putrid scent of rotting food, and then you realize it’s YOU that’s the problem. My husband routinely accidentally leaves bananas in the bottom of his work backpack. After a week guess what those bananas become? Squishy, disgusting stink bombs.

It’s real life scenarios with an extra dose of “Why me? Why now?”

Along the way when I’m imaging the characters in each new book, I work on ironing out their personalities so I know what type of humor or quirk I can inject into them. In my most recent release, When Sparks Fly, the heroine, Avery, is in a car accident that left her seriously injured, but I didn’t want this book to be too heavy or  emotional. It needed the humor to create levity in being laid up on bed-rest with her oh-so-hot roommate who she may or may not realize she’s in love with. With this, I tried to set the tone for the book early.

The opening scene, where a fight breaks out with at the Spark sisters’ event hotel, and hobby horse enthusiasts resort to jousting with their hobby horses sets the scene and the friendship dynamic of the sisters. We know immediately what the sisters’ personalities are and how they handle odd and stressful—yet humorous—situations.

It was my hope that by opening with this scene, readers knew that this book would be fun, yet have some heart.

Reading a rom com is a lot like riding a rollercoaster, where we reach an emotional peak and then plummet, and for a few moments, or pages—depending on the story, and then we’re given a reprieve from the intensity of all that emotion in the form of comedy. Every time we laugh, we release endorphins. Which means if the comedic timing is on point in a romantic comedy, readers get hit with a steady supply of the body’s natural feel-good chemical. So every time I pull on a reader’s heart strings, I like to follow it up with a little laughter. If you compare the opening scene of When Sparks Fly with the emotional confrontations found towards the end of the book, you’ll see what I mean. Sorry for the tears!

I know the term “rom com” is thrown around a lot these days and every author or publisher has a different definition. But from me, in my romantic comedies, I strive for a balance of humor and heart, with a side of heat, of course.

New York Times and USA Today bestselling author Helena Hunting lives outside of Toronto with her amazing family and her two awesome cats, who think the best place to sleep is her keyboard. She writes all things romance — contemporary, romantic comedy, sports and angsty new adult. Some of her books include Meet Cute, Pucked, and Shacking Up. Helena loves to bake cupcakes, has been known to listen to a song on repeat 1512 times while writing a book, and if she has to be away from her family, prefers to be in warm weather with her friends. Learn more at https://helenahunting.com.