When I read Abigail Cutter’s historical, paranormal fiction novel Long Shadows, I immediately had all the questions! How did she think up the idea of a Civil War ghost haunting his old digs while a young couple tries to move in? How did she get the historical details to feel so real? How did she give the old ghost such an authentic voice? Well, Abigail graciously agreed to pen a post answering all those questions and more…

Writing in Another Gender from Another Time

The novel, Long Shadows began because I wanted to get rid of a no-nonsense, very angry, and loud ghost that became active in our 19th c. Virginia farmhouse whenever we changed anything. The place had been in my husband’s family since 1854 and was jam-packed with everything anyone had ever brought to it. Terrified to stay there at night, I wanted to get to the root of why these disturbances happened and, in the process of my research, found I was writing an historical novel–one narrated by a ghost. But there was a problem. I’m a female very much alive more then 150 years after my male central character, Tom Smiley, lived, and I’ve never been a soldier. How could I make his voice believable? 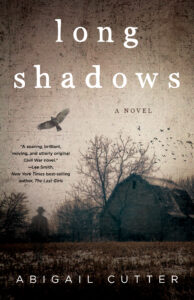 Read, Read, and Read Some More to get the Larger Picture

I mined books about the Civil War in the Valley of Virginia, where Tom fought, for general information about what he would have experienced as a common foot soldier tramping from battle to battle. Growing up in the South with uncles and cousins who only read books about the Civil War, I had minus zero interest in them. But to get my story right, I read scholarly books on the cause of the war, the history of enslaved people, and where Virginia battles were fought. This was to be a book about one young man, a foot-soldier who, with his buddies from home, has some of the dirtiest tasks– burying bodies, clearing fields for battle, and marching thousands of miles on shoeless feet. I read Drew Gilpin Faust’s book This Republic of Suffering: Death and the American Civil War which discusses the impact of so much death during this country’s only homeland war. It also describes how captured Black Union soldiers were regularly massacred. I was fortunate to have as a resource historian Edward Ayers’ non-fiction In the Presence of Mine Enemies; Civil War in the Heart of America, 1859 to 1864. His research encompasses Augusta County, the location of our farm in the Valley, where much of the Civil War was fought. And finally, I found on-line transcripts of a trial at Fort Delaware Prison, where Tom is held in 1864-65, which is falsely depicted in official histories of the fort and had a big impact on my story. Which brings me to the next phase.

Get the Details Right

I don’t think like a man, much less one from another time. So again, I turned to experiences of young Civil War soldiers in a database that Professor Ayers created from letters and diaries written by young men from Augusta, including letters from my husband’s great-grandfather, whom I increasingly suspected was our ghost. I immersed myself in memoirs written by old veterans long afterwards, often more thoughtful and eloquent than the usual battlefield letter which might say: “Bring my overcoat, something to eat, and Bobby Bland was shot in the head yesterday.” My character has PTSD, so I read articles on contemporary cases and treatments, as well as fiction such as The Things They Carried by Tim O’Brien, about boys in recent times who were deeply scarred by what war required of them. Finally, I read 19th c. novels, paying attention to the way folks spoke then. I was lucky to own a dictionary published in the 1880’s and spent months one summer looking up words and converting them to language of the time. But it all sounded too archaic, so I removed more than half, keeping just enough to sound authentic.

See and Feel the World as Your Characters Might

I tried to imagine what Tom absorbs through his senses, whether in his home–our farmhouse–or on the battlefield. The one thing I have in common with Tom is that I live in his house with many of his possessions, including his pipe and books. I observed local bird habits and song, insects, local plants and trees, and seasonal changes in the mountains of Virginia. He’s a farmer’s son camping outdoors during the war, and Nature is ever present. I hiked the Gettysburg, Spotsylvania Courthouse, and other battlefields where he fights and marches, walking them with bloodshed and the clamor of men, horses, weapons in mind. I visited Harpers Ferry to see where he trains before his first battle at Manassas. And finally, I tried to imagine, if Tom is now a ghost, how lonely he’d feel to be invisible, with no one to touch him, laugh at his jokes, or give him a hug. And how desperately he might cling to the one place that reinforces memories of an innocent time before his terrible secrets and year in prison.

With all that preparation as a foundation and pages of notes, I let the character of Tom Smiley have his way with my story and hoped he would be as real to the reader as he’d become to me.  As a footnote: our own ghost has now been gone for several years! 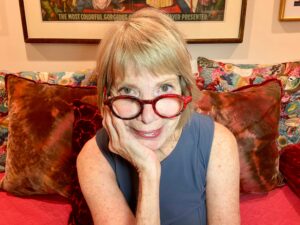 Guest Author Abigail Cutter started out as an artist/printmaker with a MFA from George Washington University, but during a long stint at the National Endowment for the Humanities she developed a deep love of American history. She married a man who came with a farm and an 18th-century farmhouse in the Shenandoah Valley of Virginia. The farmhouse came with a very active ghost. She currently lives at both the farm and in the small town of Waterford, VA, with her husband, a black Labrador named Emma, and a cat named Barnibi.