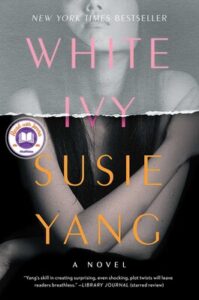 Susie Yang’s debut novel, White Ivy (2020), is about a Chinese-American girl who is determined to get her version of the American dream…by any means necessary.

Growing up, Ivy never got what she wanted, which was to be popular. Maybe if her unsympathetic mother understood that American girls needed makeup and cute clothes things would have gone better. Or perhaps if her father had enough money to buy the family a nicer house, she’d have been happy. Only Ivy’s grandmother understands Ivy’s need to fit in. She teaches the girl there’s another way to get what she desires, at least the material things, and that’s to steal. This is when Ivy learns to take what she wants.

Ivy goes to private school while her dad is employed in its IT department. While there, she falls for Gideon, a handsome well-mannered son of a senator. She admires his quiet social grace and understated confidence. Maybe she notices these traits because she has none of them. Ivy is hungry, but not literally. Her family provides the necessities, which is more than any of them had back in China. Ivy doesn’t care about the immigrant story though. She’s not grateful to be out of the Maoist mainland. She wants headbands, fashionable dresses, and electronics, like her classmates. She wants to catch Gideon’s eye.

Before she manages to do so, her father loses his job, and she must transition to public school. Without Gideon to moon over, she spends a lot of time on her own. One night, while contemplating robbing a neighbor, she meets the boy down the street, who’s doing the same thing. They start spending time together. Why not? They have stealing and loneliness in common. Ivy should be grateful for Roux’s company, but she looks down on him. He’s poor white trash. She ends up losing her virginity to him, however, but assumes she’ll never see him again after she goes to college.

Her childhood acquaintances don’t stay mere memories for long. Soon a series of circumstances lead Ivy, now an adult in her mid-20s, to become reacquainted with Gideon. She’s wise in the ways of men and knows how to attract him. Before long, they’re dating. Only, who should his sister be involved with? Another blast from the past: Roux. He’s grown into a wealthy man, though the source of his income is shady. Ivy and Roux embark on an affair, even after Gideon proposes.

Why does Ivy gamble her future with Gideon, the boy she’s always loved, for cheap sex with Roux? Maybe it’s not just sex. Maybe it’s more. Gideon knows the real Ivy—the cheating, thieving, thirsty Ivy, and he still likes her. Maybe in his own way, Roux loves her. Though, after some time, he grows tired of Ivy treating him like an afterthought. He’s sick of playing second fiddle to Gideon, a man who doesn’t know his own fiancé. When Roux makes Ivy an ultimatum, he underestimates what she’ll do to keep what she wants.

White Ivy was enthralling. Ivy is definitely an anti-hero whose choices are unambiguously wrong. She’s also a sympathetic character as her upbringing wasn’t necessarily easy. I enjoyed seeing the way this story, which is also about assimilation, class, and immigration is treated. Ivy uses stereotypes about Asians to her advantage. While never a good student, she lets people assume she was (and they do). She leads men to think she’s a virgin even though she’s got plenty of experience. And no security guard or passerby ever assumes a quiet, delicate flower would ever rob them blind. Ivy’s greatest talent is for reading people, and she uses it to get her way.

The author subverted many stereotypes about migrants, race, and money, which made for an interesting read. Anyone looking for a juicy story that still has meat on the bone should look no further than White Ivy. I’d recommend it for your next book club read. If you choose it, I included some questions to get the discussion going. Spoiler alert: don’t read the questions until you’ve finished the novel. The ending is worth the wait! 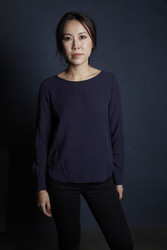 Ivy is obsessed with shallow things like beauty and money. But, is she wrong to conclude these are society’s most valuable social currency? Why or why not?

Roux and Ivy have a lot in common. Is love possible when someone knows a person too well? Does there need to be admiration for love to occur?

Would Ivy be happier with Roux? Why or why not?

Will Ivy and Gideon be happy together? Why or why not?

Is Ivy’s conclusion about Gideon and Tom’s relationship correct? Or, is she seeing things because of a guilty conscience? Explain your reasoning.

Ivy’s family overcame political violence, poverty, and hunger. Why doesn’t she give them more credit for how far they’ve come?

Ivy’s female relatives prove to be ruthless. Were her mom or grandma justified in their actions? Were their actions more righteous than Ivy’s? Or, are all the Lin women cut from the same cloth? Why or why not?

Ivy takes virtually no interest in her Chinese heritage. Why do you think that is? How is this different than other stories about first-generation immigrants that you’ve read?

Would Ivy have done what she did to Roux if her mother hadn’t told her the true story about her own high school boyfriend? How (if at all) did that motivate her? What about her grandmother’s story about the beggar?

Ivy’s parents, especially her mother, were harsh when she was young. Were they abusive? Did their actions justify any of her choices? How did they inform her choices?

Ivy believes Gideon’s family is wealthy, but they never offer to pay for anything, and her grandmother has suspicions. Are the Speyer’s pretending too?

Sylvia and Gideon are very close, and according to family pictures and lore were possibly unusually close as children. Is there anything actually untoward about this relationship? Justify your conclusions.

What do you think Ivy will learn about the Speyer’s once she’s a member of the family?

Will Ivy’s relationship with her own family continue to evolve? If so, how?

How do Ivy and Sylvia compare as big sisters?