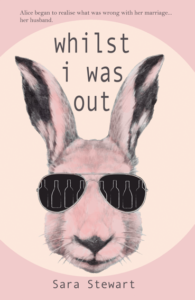 Stewart’s debut novel, Whilst I Was Out, is immensely readable and engaging. In the novel, the protagonist Alice is a hard-working mother of three children under the age of ten. She helps her husband MDH (My Dear Husband) run their own business, an advertising agency. You find out in the beginning that Alice has been the victim of domestic violence (at the hands of MDH), been all too privy to his extramarital shenanigans and is just plain fed up with her marriage. While she worked in their advertising agency up until the moment she pushed her children out of the womb in the delivery room, her husband was selfishly absorbed in his favorite pursuit: cycling. As her children grew, she found herself spending weekend after weekend raising her little ones all by herself while MDH was suiting up in his bike shorts, metal cleats and competing in as many 100-mile Saturday races that he could. It is within this context (and right after MDH returns from a month off sabbatical following the Tour de France) that Stewart, in her cheeky language writes:

A mere thirty minutes after the return of MDH from his Grand Tour, I decided it was time to dump my marriage in the recycle bin. Had I not been anesthetized most of the time with booze, I would have done the sensible thing and asked for a divorce before heading off to create a sane new life for myself and the kids. But this option never crossed my mind. I wasn’t capable of rational thought and to make the break; I needed a safe haven to stagger to. My solution was to have an affair…

Before Alice informs her readers that the affair is with a woman, we learn that she had suppressed her desire for women because of her mother’s homophobia. And it was this kind of denial and suppression that not only led to her drinking but also her inability to see how dysfunctional her marriage truly was.

Whilst I Was Out is a fresh perspective on life after divorce. It is a powerfully written attention-grabber, rich in detail and solid storytelling.

Maribel Garcia: Sara, thank you so much for joining Book Club Babble today. Whilst I Was Out is not a memoir per se, but is largely based on personal experiences, right? To me, it reads like a confessional memoir: my absolute favorite genre. What makes a memoir so appealing? It’s nonfiction, and you do not have to suspend any disbelief, rely on any narrative artifices to make the story pop out of the page. That said, Whilst I Was Out reads like a memoir, but it isn’t. How much of this is based on real, lived experiences?

Sara Stewart: Seven years ago I was diagnosed with breast cancer. I had to go through surgery, chemo and radiation, which meant a total of 12 months treatment. You are so knocked about by the chemo in particular that you don’t have the energy to do anything much at all. My social life boiled down to watching back-to-back TV box sets. However, I soon grew tired of feeling like a couch potato and decided to do something useful with my time—write a book. I wanted to draw upon topics that I knew about, so I pulled them all in as dark comedy–which was pretty much my mindset at the time. It’s known as ‘tumour humour’ and is the same sort of black comedy that diffuses other difficult situations people are faced with.

However, my life had been a lot less dramatic than Alice’s in Whilst I Was Out. I did come out as a gay woman in my forties, and I also became sober too. Writing the book proved to be a cathartic experience, focusing on certain times in my life that turned out to be a lot more trying. Despite my cancer diagnosis, life never felt as bleak as it had earlier in my life when I was drinking alcoholically. The experience reminded me to be grateful, no matter what comes along in life to “bite you in the backside.” 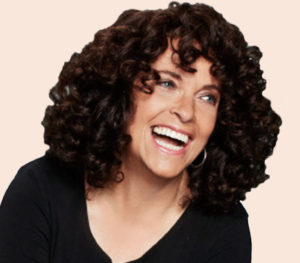 MG: Okay, first things first, congratulations on beating cancer. That is such a painful ordeal to go through. This, on the heels of coming out as a gay woman in her forties and becoming sober too. Woman, you are amazing! In the novel, Alice also comes out in her 40’s and gets sober. Did any of your real dating experiences inform how you wrote about Alice’s emotions in the book? I ask because your main character’s emotions are so specific and convincing that you hardly doubt the veracity of the trials she’s been through. The romance between Alice and her new partner is so palpable.

SS: I think it’s difficult not to draw on your experiences when you’re writing a book. That said, it’s not a verbatim timeline of my life and, indeed, I have put Alice through things that I have watched friends and people that I know go through. It’s a tangled web of many people’s lives, and a lot of it is imagined. I’ve been falling in and out of love since I was 14 years old, had my heart broken several times and have experienced every emotional nuance there is when in a relationship, so I put it all to good use in the book.

MG: Alice, already so vulnerable after the end of such a serious relationship, jumps right into another somewhat disastrous relationship, only this time with a woman. The rebound relationship can be dangerous territory for any newly separated woman (or man), but for Alice, things get complicated. Feeling insecure when it comes to her self-worth, her sexuality, and her value on the “secondary dating market,” she makes many mistakes—something that we can all relate to. In the novel, Alice had never dated a woman, was that transition (male to female partner) part of the difficulty of the first rebound relationship gone awry?

SS: I think Alice has so many flaws any relationship would have been a disaster, even if she had dated Mother Theresa. Her biggest issue is her alcoholism, and nothing works for her until she addresses that situation. I am sure if she had been sober when she met Anna, she would have spotted she was a nut job from the outset. I think Alice only tried to make it work with Anna for as long as she did to try and prove to herself and her family that the turmoil she caused had all been worth it.

MG: Anna is both physically and emotionally abusive to Alice. Eventually, Alice realizes that her new lover is just as abusive as her last. And when she comes down from the euphoric and intoxicating high, she must learn some critical life lessons. Too many people are still under the impression that intimate partner violence only happens in heterosexual relationships, right? The idea that a woman can be the one who’s abusive throws a wrench in the traditional view. Why did you choose to deal with this topic?

SS: I think it’s important for people to realize that women can be as predatory and as manipulative as men. Both men and women assume the female of the species will be caring and nurturing, so when you find yourself confronted by a female narcissist or sociopath, you second guess yourself more often than you would with a man because it’s so unexpected. In a way, this makes them more dangerous and also the person being abused less likely to be believed initially. People, whether male or female, can be good or evil so it’s worth knowing the red flags to look out for.

MG: Your novel is billed as a novel with the understanding that some of it was based on personal experience. Why did you decide to write the book as a novel instead of writing a memoir?

SS: It’s not based on any one specific time in my life, and much of it is combined with fiction to make it a more interesting read. I don’t think anyone would have enjoyed the story of my life, given I am an unknown as well as the fact that it has been far less dramatic.

MG: So much of the tension in the story stems with Alice’s problem with alcohol. I have read a lot of addiction memoirs, and so many sections of the novel came off as brutally honest and raw. It captured the intensity of battling an alcohol addiction, while also adding another layer to the taboo that comes with alcoholism: alcoholic mothers. Was it hard to write about something that you had personally experienced? And was it difficult to write about that special kind of shame felt by alcoholic moms (because let’s face it, women with children are cut less slack when it comes to fighting the disease)? What was it like having to reveal that she was also a negligent parent? Like driving drunk with your children in the backseat. As a mother, was this hard to write about?

SS: Being a recovering alcoholic is at the very centre of my life. Without my sobriety, I would have nothing as the wonderful life I have today would all slip away very quickly if I started drinking again. It’s important to keep reminding myself of the terrible way I behaved when I was drinking and also the shame you feel. It’s my way of staying sober as I would hate to go back to those times when I couldn’t remember what I had said or done. Drinking makes you full of bravado on the one hand and also totally insecure on the other – it’s a destructive combination that turns you into a rather unpleasant individual. I am not at all proud of the way I behaved, but it was a revelation to discover at AA meetings that my behaviour was similar to many other alcoholics. If I can reach just one person who is going through a similarly bad time with drink, make them feel less helpless and alone, whilst encouraging them to get help, then writing the book and baring my soul will have been completely worthwhile.

MG: Sara, thank you so much for writing such a great story and for answering our questions about Whilst I Was Out.