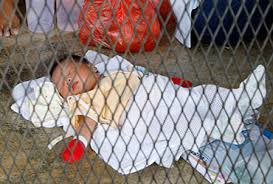 In the United States, putting together your first-born’s nursery is a rite of passage for the majority of women.  Even the most modest homes strive to provide an inspired and comfortable shelter for their little ones. So, watching images of immigrant babies sleeping inside cages and covered in Mylar blankets is not just brutal, but inhumane.  It’s un-American.  What is American, though?

At Book Club Babble we believe American is helping people, and that is where today’s featured organization, 2000 Libros (2000 Books) is stepping in (and up) to make the days of these children just a little brighter by providing them with 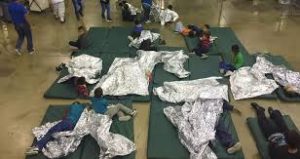 These children have made headlines since May as a result of the Trump Administration’s “zero-tolerance” policy, which was first announced on May 7. Under this new policy, all adults who do not enter the U.S. through a port of entry are supposed to be criminally prosecuted. The result? Family separation.  Adults have to appear before a federal judge before undergoing deportation procedures, so they’re held in federal custody while awaiting trial. Meanwhile, their children — who are not referred for prosecution, and thus aren’t incarcerated with their parents — end up being sent into the custody of the Office for Refugee Resettlement.

As we have watched this nightmare unfold, we have also grown increasingly aware of how difficult it is for families to reunite once they make their way through this convoluted process, as there is no formal protocol that ensures that separated migrant families are deported back to their home country together.  Reports have begun to emerge of horrifying conditions in these detention centers. According to some accounts from people working in these centers, children aren’t even allowed to hug one another while they’re in detention, and many are struggling to deal with extreme trauma.  Given these conditions, some may wonder why books? How are books going to help these children?

The same way they helped me. I entered this country the same way that these children did (undocumented).  Books have shaped me and the way that I view the world. In 1973, I entered the United States (from Mexico) as an undocumented minor alongside my own undocumented mother.  I was only six months old, so I remind my two teenage daughters that had we come in today, that could have easily been their mother and grandmother being separated.  Books have played a profound role in my life.  Beyond helping me to develop basic language skills and expand my once non-existent vocabulary, (I did not speak English when I entered school), books have always inspired me.   In my heart, I know that the books that 2000 Libros is collecting will not just inform children’s imaginations and inspire creativity, but also strengthen their self-confidence and help them understand why they are who they are.

Books, in their many forms and languages, help us discover where we come from and help us figure out where we want to go. Today Book Club Babble is interviewing Elizabeth Ballou, who founded 2000 Libros, with the help of another Washington, D.C. resident, Kristin Stadum. The mission of 2,000 Libros is to provide books to immigrant children who have been separated from their families and placed in centers across the U.S. Their charity is working in conjunction with D.C. Books to Prisons, a similar organization that collects books for incarcerated people and prison libraries.

Maribel Garcia: Elizabeth, thank you so much for being with us today.  You write: Books are a small way of showing these children and teens that many other worlds exist. Hope, love, happiness, and wonder are available at the turn of a page.  What inspired you to start the charity and what has the process been like?

Elizabeth Ballou: As a college student at the University of Virginia, I took a class called Books Behind Bars, in which we visited a nearby juvenile detention center and talked about Russian literature with the residents. The short stories and poems by Dostoevsky, Lermontov, Chekhov, and more gave us a way to talk about our lives, and how it’s possible to see ourselves in fictional characters, and what those characters give back to us. I often felt angry that many of the residents were just teenagers, but some of them were going on to a life of imprisonment after juvenile detention. In the end, though, it was better to do something about it and keep going to Beaumont every week rather than paralyze myself with anger.

When I heard that kids and teens were being systematically separated from their parents at the border, I thought of the young men at Beaumont. We didn’t change the course of their lives or anything, but when we talked about books, we got to explore someone else’s world for a few hours. I thought that, if we could just get books into the hands of kids separated from their parents, as well as unaccompanied minors (kids who came to the border alone), we could make a tiny difference.

I started calling centers that house kids separated from their families to ask about their book donation needs and policies. When I realized I couldn’t do this on my own, I emailed DC Books to Prisons, a DC-area charity, and was incredibly lucky that Kristin Stadum read my email. Kristin is one of DC Books to Prisons’ board members, and she’d already wanted to do some kind of book drive. She’s organized, generous, and driven. She and DC Books to Prisons have been a major reason why 2,000 Libros happened.

The response so far has been incredible. Not only do people like to give specific objects with specific uses, such as books, but they like giving something that has emotional significance to them. And certain titles and characters mean so much to all of us as individuals.

MG: How can our readers help? What do you need and how may they go about helping?

EB: The best way for people to help is to a) donate books through our Amazon wishlist; b) drop off gently-used, Spanish-language books at New York City bookstores like (we just wrapped up a book drive in DC, so now we’re focusing on NYC); or c) sign up to start their own local book drives.

Many local bookstores have agreed to serve as collection points for used books, and some have even created in-store wishlists for those who want to buy new titles. It’s a great way for them to drum up business and support a charitable cause, and Kristin and I have realized that that model can be set up in communities all over the country.

Other Resources That Help Immigrant Children

Books are portals into anything we can imagine, from a single person’s mind to an entire realm. They’re not cure-alls, however, and they don’t take the place of legal aid or activism. Ideally, a system that separates children from their parents wouldn’t exist at all. Since it does, though, consider supporting these children through the following networks:

MG: Would you mind giving us a brief update on the status of the campaign?

EB: So far, we’ve collected over 1,500 books (and now the idea of donating 2,000 libros doesn’t seem so far-fetched or ambitious!). We’ve mailed these titles to centers in Virginia, New Jersey, New York, Oregon, California, Texas, South Carolina, and more. The biggest recipient of donations is Southwest Key, which operates the largest number of centers for kids separated from their families.

Now that many kids have (thankfully) been reunited with their families, we’ve pivoted to mostly supporting unaccompanied minors. They face the same issues as children separated from their families, and they need books and other donations just as urgently.

MG: Have you been able to meet any of the children who are receiving the books?

EB: I so wish we could! But no, we haven’t. We have received pictures of the books getting unboxed from some of the centers housing these children, though.

MG: What would you say to people who may think that donating books is trivial in comparison to what seem like basic necessities required for living and thriving?

EB: The mind is just as worthy of support and love as the body. Of course food and bedding are important, but people of all ages and backgrounds need books in order to exercise their imagination.

The way I see it, books do two incredible things. They encourage creativity and playfulness, which are probably hard to come by whenever you introduce the separation of families into the equation.

Second, books educate. They teach language skills at the very least, and most books also teach history, geography, and even math and science. (One of the titles that Kristin and I like the most is Las chicas son de ciencias, which tells the story of 25 incredible women who have contributed to various scientific fields.)

MG: Some people want to start their own book drives, how may they go about doing so?

EB:  Fill out our volunteer form and we’ll email you to explain how you can kick-start a book drive in your hometown!

About Elizabeth Ballou  and Kristin Stadum

Elizabeth Ballou  graduated from the University of Virginia in 2016 with degrees in Spanish and English. After a stint as an editorial assistant at Quirk Books in Philadelphia and as a writer at Clutch in DC, she is now in New York City as an incoming grad student at NYU’s Game Center. She will be studying video game design with an emphasis in video game writing and narrative design. In her spare time, Elizabeth is a freelance writer.

She contacted DC Books to Prisons while brainstorming with a former Quirk Books coworker about a good nonprofit to contact about a book drive. She had been meaning to get involved with a local prison literacy group since moving to DC, but hadn’t had time. After quitting her job at Clutch in preparation for grad school, though, she found herself with two empty weeks. She knew that she wanted that time to get a Spanish-language book drive for immigrant kids off the ground, so she emailed DC Books to Prisons where Kristin wrote back within hours. Together both women launched 2,000 Libros (so named for the original estimate of roughly 2,000 immigrant kids separated from their parents, though that number has risen to 3,000) on July 4th and have collected hundreds of books in the two weeks since.

Kristin Stadum lives and works in Washington DC, a place she’s called home for nearly 20 years. She holds a degree in Journalism from Bowling Green State University, which somehow morphed into a career in analysis and data science. In her free time, she reads books to kids at a domestic violence shelter and volunteers with DC Books to Prisons where she currently serves on the board. In addition to board responsibilities and supporting the core mission of sending books to prisoners, she spearheads a program to collect books for a number of prison book clubs, and as of July 4, 2018, she collects and distributes books for detained immigrant youth who have either been separated from their families or arrived at the border alone.

Kristin continues to write daily and has been published by National Geographic and in the Huffington Post as well as by Budget Press, on Cowbird, and in her own blog Candy Sandwich.