It’s summertime, and I like humor in my beach reads. That’s why I enjoyed Christopher Moore’s, Noir (Harper-Collins, 2018). Set in post-war San Francisco, this caper has all of the best Moore elements: a flawed yet funny main character, zany side characters, preternatural plot points, and a wild woman. 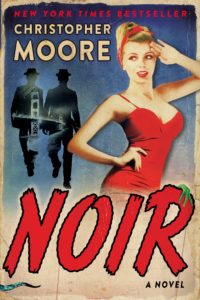 Sammy “Two-Toes” (a moniker not exactly earned during World War II) is a bartender who works for a jerk, but hey, he’s a jerk who gave him a job. One evening in strolls Stilton—you know, like the cheese. She doesn’t look anything like the regular drunks holding up the bar. She’s a war widow in her early 20s, and it doesn’t take more than a once-over for Sammy to be smitten with this dame.

Before he can get her number, she walks out just as Sammy’s boss, Sal, makes a request. A general based in Roswell (yes, that Roswell) is getting together with a bunch of yuckety-yucks for a hush-hush meeting in Marin County, north of the city, and they need some girls to entertain. But the girls need to not appear to be professionals. In other words, Sammy’s stuck recruiting.

To get some help, Sammy goes to his friend, Eddie Moo Shoes, who works at a club just down the street in Chinatown. At a back alley noodle shop Eddie knows, they think of a way to find some regular “Bettys” for the general. While making plans, they notice their fellow customers—some old Chinese men—are willing to pay top dollar for a soup with a special ingredient in it: cobra (this plot point finds its way back into the story later).

What happens next? Well, Stilton and her friend agree to meet the general’s friends in Marin County. Eddie and Sammy concoct a get rich quick scheme by way of an exotic animal purchase from Africa. It goes very wrong. Sammy has to save Stilton from the general’s friends once she finds out what he brought from Roswell to impress the muckety-mucks. In other words, it gets crazy—but it’s a fun ride.

Moore usually includes supernatural elements in his books, but that doesn’t mean he ignores his research. Post-war San Francisco was a true melting pot. African-Americans from the South were offered full wages if they joined the war effort, so the black population soared. Chinatown was long a historical element of the city, as was Italian North Beach, and all of the other communities in between. He also touches on San Francisco’s noted LGBT community. The story includes the city’s diverse residents, but it also shows the way some white residents weren’t ready for such rapid changes.

As a note, Moore uses terms from the 1940s that we wouldn’t use today (and not just “toots” and “dame”). But he is never crass—only the worst of his characters are—and don’t worry, justice is delivered in the end. Still, he lays it on thick for effect—this is noir, after all. If you don’t mind spending some time in the City by the Bay’s shadows, even while you’re sunning on the beach, Christopher Moore’s Noir will be a refreshing break from the norm.