In the near future, despite making leaps and bounds in our space travel abilities, humanity has been trapped in the inner solar system by a mysterious alien race. Earth’s government, rather than take a stand against this ongoing threat, forbids any ship from attempting to explore beyond the perimeter. Meanwhile, a shadow group has slowly been building a craft that should be able to thwart any attack and breach the invisible barrier. But anyone who’s part of the Exodus project knows their career, and likely their freedom, will be over if they’re discovered. Meet John and Julie – two smart, competent cadets who’ve received less than desirable assignments after graduation. When tapped to command the first Exodus mission, it’s an offer neither can refuse.

Exodus of the Phoenix is the first book in Robert Stadnik’s sweeping sci-fi series. Featuring flawed yet engaging characters and a fresh plot line, it’s an excellent start to the five book journey. I’m so pleased to chat with Robert today on BCB!

Tabitha Lord: When you began the Exodus series, did you have any idea how many books it would include or how the story arc would evolve? How much did you have pre-planned? Did a character or a subplot ever take a surprising turn?

Robert Stadnik: When I started the Exodus series, I knew the general plot from start to finish. I had an estimate in my head of how many books the story would encompass, and I was way off. Even though I knew the general plot-line, many of the specific occurrences with characters didn’t pop in my mind until I began actively writing the story. As I introduced the characters, I had to determine who would be primary to the storyline and who would be supporting characters. From what I recall, I estimated the series would be encompass nine novels, but only turned out to be five. 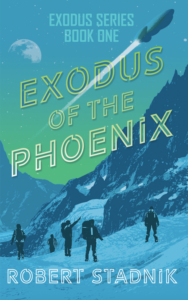 I was surprised at how several characters developed as I wrote the series, which drove some of the sub-plots I included. For example, I knew that Admiral Johnson was dedicated to the Exodus Project, but I was taken aback how far he had gone to ensure the project’s success. Evidence of some of the things he had done was hidden on the ship. Suddenly, I realized that the ship held secrets, some of which John and Julie would uncover during their search for the Screen.

As I wrote more and more novels in the Exodus series, I was constantly caught off-guard at how things were developing. Characters surprised me in ways I never imagined. Originally, the Exodus Series was to be only a four-part series, but the death of my father changed that. I felt compelled to write a new Exodus novel to process losing him. I was shocked that I was able to write an entire story not just relating to his passing, but further develop character and events in the Exodus Universe.

TL: I like that the two main characters don’t really like each other, at least for most of the first book. Their dynamic adds tension to the story and allows the reader to see them from each other’s perspective. Can you give us a quick character sketch of John and Julie?

RS: John and Julie are individuals of extremes. John is so confident that he’s arrogant. His ego knows no bounds and he’s unapologetic for it. He got into the Academy because he knew he was smart and could accomplish anything he set his mind to. Julie is a by-the-book person. She worked hard at everything she did and prided herself on following the rules and the expectations laid out for her in order to get accepted to the Academy.

The first Exodus novel explores how these two diametrically different individuals are supposed to work together commanding a ship whose mission may hold humanity’s continued existence. With two individuals having no respect for each other, it seems the chances of them cooperating is highly unlikely. But that’s John and Julie’s relationship to each other. When they’re thrust into a situation where thousands, maybe billions, of lives are at stake they have to really dig deep to see if they can put aside their animosity for each other for the betterment of others.

TL: Good world-building in sci-fi is a necessity. In your series, an alien race has been attacking and destroying any Earth ships that attempt to leave the inner solar system, essentially limiting our ability to explore. Can you talk a little about this future Earth, the technology being used there, and the relevant political structure?

RS: I purposely wrote a timeline of Earth’s history leading up to the events in Exodus Of The Phoenix. The calamity that almost destroyed the planet was a big driver in how technology would develop. Because in the Exodus Universe Earth was almost decimated by nuclear weapons, one of the first things governments and organizations needed to do was clean up the planet, so efforts on developing technology to clean up the nuclear waste was the focus. Technology to improve the creature comforts of life took a back seat to developing tech that would clean up the planet. Sure, there are robots (I call them bots in my novels) used in society, but they’re not complex humanoid style machines with complex AI. They’re simple shaped, with only semi-autonomous AI software running them because that’s all that the world needed for the moment. Technology is not developed for the sake of developing it. There has to be a driving need for something that technology can provide. I followed that premise when creating the Exodus Universe.

Being forced to collectively work together to clean up the planet and resolve the issues that led up to the launch of nuclear weapons, it was the next logical step for the nations to create a single government entity, which was driven more-so as people started to look at colonizing the moon and Mars as the first steps to exploring space. If humanity was to establish a presence on new worlds, it had to be done as a unified race.

TERRA, the military arm of the government, became a celebrated institution. People looked to TERRA to protect them from the Screen, even though all TERRA had to do was ensure no ship attempted to fly to the outer solar system. People needed something positive to focus on to divert their attention from the ever-present Screen threat. TERRA was that diversion. Even the government played up the importance of the military, which we see in the first Exodus novel and subsequent novels becomes a problem for the government.

TL: Why do you write sci-fi? I get this question all the time, and I ask it of fellow sci-fi authors, because the answer is usually so much more interesting than it would first seem!

RS: The short answer would be because fantasy is so much more interesting than reality sometimes. Actually, I write science fiction as my way of translating my personal life experiences into works of fiction. Much of my personal life is dotted throughout my novels. That’s the primary driver of my imagination. Some of my books have been therapeutic for me. If my personal life is such an integral part of my books, it would seem I would write a biography instead. But for me, using science fiction to explore aspects of myself makes sense for me.

TL: Who do you read and what do you watch for pure entertainment and/or for inspiration?

RS: I like to read novels from independent authors. For me, their stories (whether it’s science fiction or fantasy) come across less filtered and more raw. I find their stories more engaging for me. And some of the novels some of the independent authors come up with are absolutely wonderful. I also enjoy reading up on historical figures and about specific industries (ie: video games, cars, etc).

TL: Let’s talk a little more about you. When did you write your first book? Are you currently a full-time writer? Tell us 5 things we wouldn’t know about you from your bio alone.

RS: I wrote my first novel, Exodus Of The Phoenix, over a period of five years. I literally dreamt up the novel. To this day I can still visualize that dream, seeing a massive ship rise from Earth and head out into space. I woke up and had the entire story in my head.

Writing your first novel is difficult for any writer. You’re constantly doubting yourself and wondering if you’re good enough. That’s why it took five years to write my first book. I also was involved in a relationship where my partner did not support me at all.

There are several things about me fans are unaware of. I had a successful career for many years as an internal auditor in the corporate world (my corporate positions is what gave me the opportunity to travel so much). I’ve been to forty-two states, and it’s still my goal to visit the remaining eight states. In one of my corporate jobs, I investigated so much fraud that I studied and became a Certified Fraud Examiner (CFE). I’m half Russian and half Latino. My dad knew Russian and French, and my mom knew Spanish. Unfortunately, I did not learn any of those languages. Finally, I have two dogs: a Labradoodle (Amica) and a Maltese/Yorky mix (Morty). I always wanted to give a senior dog a second chance, hence why I adopted Morty when she was around 12 years old. She wasn’t just old, but also blind. The rescue organization assumed no one wanted her because of her blindness, but that was irrelevant to me. She figured out the layout to my home in one day and navigates it with ease.

RS: I’m currently working on a science fiction spy novel that’s set in modern-day Russia. This is something I started at the start of the year, but then got side-tracked with a new story for the Exodus Universe that takes place in the 30th Recently, my mind has been so focused on the spy novel that I’ve returned to working on it, so the new Exodus story has been tabled for now. I have about fourteen unfinished manuscripts laying around, waiting for me to complete them. I’ve resigned myself I’ll never be able to write all the stories I have circulating in my head. 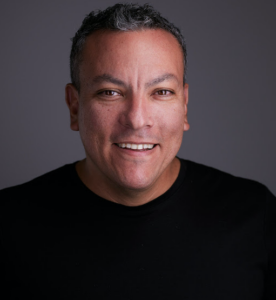 Robert Stadnik is a science fiction writer, author of the Exodus starship adventure series and Exodus Universe novels. Originally from Southern California, Robert has lived in Phoenix, Arizona for over twenty years. He travels extensively for work here in the U.S. and internationally, meeting people from all walks of life. For more information, please visit: https://robertstadnik.com/