“In the far future, chocolate is Earth’s only unique commodity – one that everyone else in the galaxy is willing to kill to get their hands, paws, and tentacles on.”

Free Chocolate, by Amber Royer, is one of the most unique and interesting science fiction books I’ve read in a long time. A few chapters in, 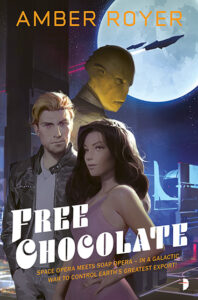 before I’d done much research on the series, I thought it read like a telenovela set in space. Turns out, that is what the author was going for, and she nailed it! The story is a perfect blend of humor, intrigue, and colorful characters with enough depth to balance the quirky plot. Welcome to the Chocoverse! Read on to learn more…

Tabitha Lord: Amber, thank you so much for chatting today. I have so many questions! You probably hear this one all the time, but I have to ask, where did you come up with the idea?

Amber Royer: I think there are already a number of similarities between science fiction shows such as Star Trek and soap opera tropes. When I decided to make chocolate the central commodity the whole ‘verse is fighting over, Mexico made sense as the birthplace of my protagonist, because many consider Mexico the birthplace of chocolate. When you put those concepts together, the telenovela aspect was inevitable.  I studied the structure of a traditional novela, and gave Bo an arc that follows the emotional beats – but on a galactic scale.  I play with the tropes a lot – both from the soaps tradition and the space opera one.

The idea for the Chocoverse itself came in stages. I had attended the Dallas Chocolate festival, and sat in on a bean-to-bar chocolate making demo.  Shortly after that, I did some lectures aboard a Royal Caribbean ship that included doing a chocolate tasting, and on that same cruise, visited a cacao plantation for the first time in the Dominican Republic. All these aspects of chocolate were in my head when NaNoWriMo started that year, and I needed an idea to work with. So I basically wrote a set piece on board a space ship where everyone was trying to get ahold of a cacao pod.  Kind of like Noises Off in space. It took a lot of drafts to get from that NaNo project to what eventually became Free Chocolate.

TL: The humor and outrageous plot is balanced nicely with tension, characters who have far more depth than would first appear, and moments of real cruelty and injustice. For example, there was a Hunger Games moment in Free Chocolate, when the crowd is bidding on clothing and jewelry from a soon-to-be executed prisoner. The sense of pop culture gone awry is a disturbing, if exaggerated, reflection of reality here on planet Earth. Can you talk about some of the deeper themes you were exploring with this story?

AR: The love-hate relationship many of us wind up with for social media is definitely a theme in the trilogy, as is the outrageous nature of reality television. So many people lose much of their humanity behind the anonymity of the Internet, and the spin put on things changes the meaning of even whole video clips. I love that you keyed in on that moment with the jewelry. The prisoner in question has a dog, and one of the characters adopts the dog to keep it from being snapped up as another execution trophy.  This serves as a huge turning point for how Bo sees that corgi-adopting character, who starts out as an antagonist, and shows that he has a human side and a sense of honor.

There’s also a lot in the trilogy about the nature of love – both romantic and platonic/familial. I intentionally created an alien species with different values, and a different take on galactic history, to give Bo a love interest whose nature she would have to work hard to understand. Three books in, and she’s still uncovering nuances of Krom culture and gaining new understanding of why the Krom characters make certain choices. I play with this linguistically, too, as Bo’s love interest learns more Spanish and she learns more Krom, and they start dropping each others’ language into their conversations. As her relationships with a number of characters deepen, she finds not only romantic love, bur found family and new understanding of her blood family.

I also set up a premise that involves bitter history between Earth and Krom, and between Zant and Evevron (where some of the secondary characters come from). One of the deepest themes running through the trilogy is the ability of people to overcome prejudice, to grow in understanding of each other, and to find common ground even with former enemies.

TL: You’ve feature quite a few different intergalactic species, all with their own culture and appearance. How did you keep them all straight?

AR: I am a super mega planner. I have a full wiki file I created for the series, with pages for each of the planets and detailed timelines of Galactic history. I’ve built enough culture and history that for some spin-off stories, since there wasn’t room to include all of it in the trilogy. I also have maps of geography, and sketches of characters.

TL: Half the time, my mouth was watering as Bo described some chocolatey confection. She’s also culinary student, so there are several scenes where she’s baking or cooking something delicious. What inspired you to make cooking, baking, and food in general, such an integral part of the story?

AR: This all started with the chocolate, so playing up the food angle just makes sense. But I also love to read culinary-related mysteries. So I though, why not culinary sci-fi? There’s not a lot of food eaten and described in science fiction, and what is presented is often a sign of deprivation or cataclysm. So I went the other direction with it, and made food a focus throughout the galaxy that would allow for cultural exchange – and for conflict.

Many of the foods Bo cooks or eats are inspired by dishes my husband and I have sampled on our travels, or learned to make after friends had introduced us to a cuisine. I also researched how chocolate is consumed in different parts of the world. There was a character I wound up having to cut, who was supposed to be the artist doing Bo’s publicity pieces who was a lot of fun – and was inspired completely from some of this research. He was Canadian and addicted to Nanaimo bars – but afraid to eat them after some of the events in Book 2.  He may eventually get his own short story (even though his information was deleted from the manuscripts, he’s still in the wiki).

TL: Without giving away too much, can you talk about Bo’s adventures in the rest of the series?

AR: Bo opened a huge box of problems in Free Chocolate, that span generations of history and planets half way across the Galaxy.  She gets to visit both Evevron and Zant (two of the most dangerous planets in the Galaxy) in her quest for the truth. This is a big story world, with no simple right and wrong (after all Bo commits treason a couple of chapters into the first book) but rather characters both human and alien doing the best they can to serve what they believe is right. She faces monsters and alien intelligences – but negotiating relationships with the people traveling with her may be even more dangerous.

There’s a huge threat of war looming, and Bo will have to use her heart, her wits, and her budding skill as a diplomat in order to keep the galaxy from tearing itself apart.

Amber Royer writes the CHOCOVERSE comic telenovela-style foodie-inspired space opera series. She is also the author of Story Like a Journalist: a Workbook For Novelists, which boils down her writing knowledge into an actionable plan involving over 100 worksheets to build a comprehensive story plan for your novel. She blogs about creative writing technique and all things chocolate at www.amberroyer.com. She also teaches creative writing for both UT Arlington Continuing Education and Writing Workshops Dallas. If you are very nice to her, she might make you cupcakes.