Brilliant interviewer Bo Riccardi hopes she can use her synesthetic skill of seeing the truth to save her husband Oscar’s life. His abductor has an unknown vendetta against Bo and wants to destroy her by using the forum of her web radio show against her. Without a clear demand of what exactly he wants, the kidnapper seizes control of the station and its audience to gain their sympathy and support for his fabricated struggles against the powers that be. All the while, the listeners never know that the man has kidnapped Riccardi’s husband and plans on keeping him until he’s decided he’s done playing his little game. Weinstein’s story moves quickly, and the unusual lie-detecting twist he includes makes it doubly intriguing. We’re thrilled the author could join us today on BCB to discuss his newest suspense Watch What You Say.

Amy Wilhelm: In Watch What You Say, Bo Riccardi’s chromesthesia plays a crucial part in trying to track down her husband’s abductor. Can you tell our readers a little about the phenomenon and how you were able to represent it accurately in your novel?

George Weinstein: According to the National Institutes of Health, 5%-15% of the world’s population has some form of synesthesia, the blending of senses. However, I think we’ve all experienced a flash of this cross-wiring at one point or another: a sound that seems to produce a color (maybe that’s how “blues” music got its name), a taste that evokes a sensation of shapes in one’s mouth, an odor that provokes a skin reaction, etc. In Bo Riccardi’s case, she hears as much or more with her eyes as her ears, a synesthetic phenomenon called chromesthesia. Musicians as varied as Duke Ellington, Billy Joel, Mary J. Blige, and Tori Amos were/are all synesthetes with chromesthesia. In Bo’s case, every sound produces a mental image of moving, colorful shapes. She’s learned to interpret these such that, if you’re speaking, she can tell your emotions and also your intent. This makes her the ultimate BS detector, as she can literally watch what you say. Much of my upfront work on Watch What You Say involved interviewing synesthetes and reading books and articles by or about them. I want readers to feel as if they’re experiencing the world in a whole new way with Bo.

AW: Bo’s special ability allows her to read people with incredible accuracy. But it seems that such a gift could also make it harder to get close to others since those around them can’t get away with the white lies and fibs that are part of our social tapestry. How does Bo’s talent both help and hurt her?

GW: Bo’s chromesthetic talent has turned her into a topnotch interviewer, but it does make personal and professional relationships awkward when people harbor inappropriate feelings for her or are untruthful. She gets a regular taste of the lie-detecting herself, because her teenage daughter, Candace, inherited the same gift and always calls out Bo for trying to slip something past her. Bo hopes the chromesthesia will give her an edge over the kidnapper, but there are problems when one relies too much on a dominant strength. She learns this when the ability she’s leaned on for so long starts to fail her, leaving her with senses and skills she’d allowed to atrophy.

AW: Oscar’s kidnapper Deke essentially hijacks Bo’s interview show. In the process, he gains supporters and a following. What’s your opinion on this type of instant celebrity available in our current culture?

GW: An unfortunate aspect of our current culture is that many people obsess over the number of likes and shares their social media posts receive—linking their self-esteem to this—and they’re susceptible to jumping on others’ bandwagons, too, just because everybody else seems to be. Every day, new posts and memes are “going viral.” The virus metaphor is apt in all respects—becoming infected is seldom a good thing. I suspect that most habitual social media users hope that something of theirs will get caught up in the zeitgeist du jour, so they can get a taste of fame. Until then, they’re willing to get swept along with whatever ephemeral Internet sensation is claiming the most attention. The craving for the adulation of strangers, and the urge to capitalize on it, compels the kidnapper Deke. It’s not enough to destroy Bo; he wants to do it on the biggest platform before the largest audience he can assemble. The inter-generational ripple effects throughout Bo’s family will, in Deke’s mind, ensure a kind of immortality for himself, even after the zeitgeist has moved on to the next hot thing.

AW: Many of Bo’s listeners seem to enjoy a good conspiracy theory. And Deke is happy to provide them with his own. What’s your explanation for the fascination with such things?

GW: I think many people want to believe there are concerted, deliberate forces at work, a conspiratorial cabal of powerful, secretive people manipulating everything from economies to individual lives, because they cannot accept the notion of either agnostic random happenstance or divinely planned fate. To them, it’s easier to believe in a shadowy Deep State pulling all the strings. In Deke’s case, he also understands that such people crave a Robin Hood-like character who is forever sticking it to The Man and thwarting their schemes for wealth and domination. What makes Deke’s character so threatening is that he comprehends, much better than Bo, how easy it is to give such people what they want. Because she can spot and swat lies with such ease, truth is the most important virtue for her, but many people prefer a fable that reinforces their love of conspiracy; all they ask is for any little element of truthiness in order to suspend their disbelief.

AW: Social media plays a strong role in Watch What You Say, creating another avenue of attack on Bo and her family. Is the truth getting more difficult to uncover in a world where anyone can say or show anything about anyone instantly?

GW: I do think the ability to demonstrate truth, and its overall value in our culture, are under siege. Critical thinking skills deteriorate as people become increasingly satisfied with unverified soundbites that cater to preconceived notions and prejudices. Many want information fast and in consumable chunks so they can move on in haste to the next tidbit that reinforces their worldview. They claim to see and read more “news” than ever, but all they’re really getting are headlines created to reassure them of what they already have been told to think. A pretty cynical view, indeed, but it’s much harder to make a case for the contrary.

AW: Bo beats herself up for not doing enough to help her husband. Is this reaction common for family members of those who are kidnapped?

GW: Bo is in the uniquely unenviable position of being the only one who can save her husband. Most families of kidnap victims feel powerless. This is exacerbated in Bo, because she feels as if her chromesthetic gift should give her power over Oscar’s abductor, but instead she keeps discovering its limitations and how severely Deke has boxed her in. In her case, too, the ransom demand is much less clear or concrete. She can’t simply raise and turn over a sum of money to get Oscar back. Rather, she must endure Deke’s public exposure of her source of guilt and pain for as long as he wants, until he’s finished with her—and she’s finished professionally, with her personal life destroyed. The stakes are always high for kidnap victims and their families. For Bo, though, the price she’s being asked to pay is so much higher than mere money.

AW: Anything new on the horizon?

GW: I’m working on a sequel to the best-selling of my books, the Southern historical novel Hardscrabble Road. I’m also outlining a Watch What You Say sequel, where Bo is compelled to join forces with the strong-willed heroine of my mystery novel Aftermath, Janet Wright, to solve a mystery and, along the way, discover the power of sisterhood. Meanwhile, I continue to help other writers take steps toward their goals through the auspices of the Atlanta Writers Club (AWC), where I’m the current president, and the Atlanta Writers Conference, which I created in 2008 for the AWC and continue to direct. 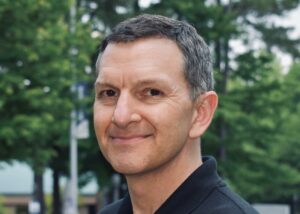 In addition to writing novels, George Weinstein has managed the Atlanta Writers Conference for a decade helping nearly three thousand writers make strides on their quest for publication. In 2018, readers of The Writer magazine voted the Atlanta Writers Conference the best in Georgia, casting more votes for it than any other writing conference in the nation. George lives in Roswell, Georgia – just outside of Atlanta – with his wife and their furry, four-legged children.