Waiting for the Night Song is a thriller imbued with lushness and depth. Its pacing is perfect, its characters genuine. And its woodland New Hampshire setting is an invitation to view the natural and human worlds as Cadie Kessler, a forestry researcher, sees them – complex and interrelated. This thriller, which dances with the soul rhythm of literary fiction, brings a life-changing decision in Cadie’s past into the present and reunites her with her childhood friend and secret sharer Daniela Garcia. Though it harbors buried tragedy, Cadie’s heart sings its own truth throughout this novel. The reader feels for her as she tries to do the right thing under circumstances that make that difficult. We’re so excited to talk to debut author Julie Carrick Dalton about Waiting for the Night Song.

Amy Wilhelm: Cadie Kessler and her friend Daniela made some very impactful and deadly serious decisions when they were just children. As I pondered their choices, I felt like they may have been the same ones I would have made as a child, although, not what I would decide now. What do you think?

Julie Carrick Dalton: One of the questions I wrestled with is: Are we, as adults, responsible for bad decisions we made in our youth? Are we still the same person who made those bad decisions? I wanted Cadie and Daniela to honestly believe they were making the best choice possible when they were kids. But as adults, I want them to see all the things they hadn’t understood when they were younger.

I want them to carry the guilt of the childhood decision, while still honoring the fact that they had been doing the best they could at the time.

AW: As a follow-up, and without giving too much away, why do you think the adults involved make the choices they do? They certainly don’t have the excuse of innocence and naiveté that Cadie and Daniela have.

JCD: Great question! I thought about this a lot too. The adults who make difficult, life-changing (and questionable) decisions all do so with the intention of protecting someone else. None of them are acting out of malice or selfishness. I’m not saying they always made the best choices. It begs the question:

Sometimes doing the right thing can be selfish. Protecting people we love can force people to do unimaginable things. If the adults involved made these complicated choices simply for personal gain or to protect themselves, right vs wrong would be more clear. But when they act to protect someone else, the lines between right and wrong get fuzzy.

AW: Cadie’s career as a forest researcher investigating the habits and geographical movement of beetles is a solitary one. Do you think the events of her childhood amplified her loner qualities to lead her to her particular vocation?

JCD: In early drafts of the story, Cadie was a journalist investigating the beetles. But she felt too far removed from nature. Too far removed from that little girl who loved to run wild in the forest. I wanted her to not only love nature, but to also feel that she owes the forest something for protecting her secret all those years, so I transformed her into a forestry researcher. As a child, Cadie didn’t have many good friends. That’s why her relationship with Daniela was so important to her, and why it hurt so much to lose that friendship. Cadie never really recovered from that loss and has a difficult time forming close relationships as an adult. As a child, the woods and lake were companions to Cadie, so it felt natural for her to choose a career where she could be a loner in the forest. I do think she craves meaningful relationships. But being alone in the woods doesn’t make her feel lonely.

AW: In a related question, the Cadie we come to know as an adult is consistent with the Cadie we are introduced to as a child. How did you keep her character so authentic between child and adult?

JCD: The easy answer is that there’s a lot of me in both the child and adult versions of Cadie. I was that awkward little girl with 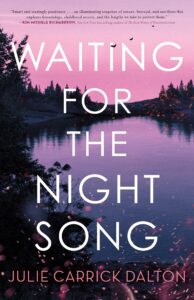 long red hair climbing trees all summer. I often think about how spending summers on my grandparents’ farm when I was young influenced my decision to start my own farm as an adult. I tried hard to find ways to echo moments from Cadie’s childhood in the adult storyline so you could see snippets of young Cadie shining through. A couple of examples are when she goes skinny dipping in the lake early one morning as an adult, and when adult Cadie cuts her leg when jumping from rock to rock in the woods on her way to meet Sal the day they go blueberry picking.

AW: Your writing style merges the qualities of both thriller and literary fiction. Do you admire any particular authors in either or both genres?

JCD: I’m a huge Barbara Kingsolver fan. I love her novels, especially Flight Behavior and The Poisonwood Bible. Her memoir Animal, Vegetable, Miracle also had a huge impact on me. It tells the story of her family living on their farm and growing their own food for a year. I read it right before I built my own farm. I found inspiration in her personal story as well as in her fiction. And I love the beauty and lyricism of her language. I read more literary fiction than thrillers. I like quiet thrillers with dark twists, like History of Wolves by Emily Fridlund and Never Let Me Go by Kazuo Ishiguro. I also found inspiration in reading All the Missing Girls by Megan Miranda because of the unusual way she employs time and memory to tease out the truth.

AW: Waiting for the Night Song conveys a deep love and reverence for the forest. Does that reflect your own sentiment?

JCD: Yes, absolutely. I own a one hundred acre farm in rural New Hampshire. But I don’t really have a background in agriculture. It all started with the trees. The piece of land near our family home was put on the market for timbering and development. Bear, moose, deer, and so many other animals lived in that tract of forest and I hated the idea of it being developed. I walked the trails on the property and I just felt like I needed to protect it. I took a wild leap of faith and bought the land. Several acres had already been clear cut at this point, so I was able to build a barn, pastures, and fields without taking down too many more trees. About ninety-two acres remain wooded and I allow public biking, horseback riding, walking, and snowmobiling on my trails. The State of New Hampshire actually operates my trails similar to a state park, even though I own the land. The forest is breathtakingly gorgeous. It even has a babbling brook straight out of a fairytale and a cute wooden bridge. I’m quite certain there are trolls living under the bridge. I’ve always loved forests. I used to read books in a tree when I was little, and I have built more treehouses, forts, and fairy houses than I can count. Writing about a young girl who loved the forest wasn’t a big stretch for me.