Interested in learning how to perform stand-up comedy or just curious how it’s done? Stephen Rosenfield will be chatting with us on Sunday, December 10 at 9 pm, EST. His release, Mastering Stand-Up, is a fun read – no surprise since he’s a successful comedian – and also densely packed with practical advice that is sure to work if you work it. Register for the live chat, and you’ll be able to type direct questions for Stephen to answer. Even if you just want to listen in, it’s sure to be an entertaining and informative interview. We can’t wait!

Do your homework before our interview. Buy his book here! 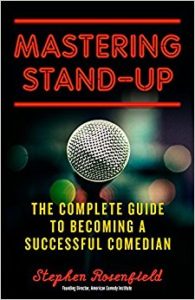 Stephen Rosenfield is the Founding Director of the American Comedy Institute, the premier stand-up comedy school in the United States. The extensive media coverage of his teaching includes the Starzmini-series, Standup or Shutup, and a Sara Fishko documentary aired by NPR. Alumni of Rosenfield’s workshops include some of today’s most prominent comedians and comedy writers, such as Lena Dunham, Jim Gaffigan, Eric Slovin, Jessica Kirson, and Michelle Buteau. He has directed, coached, and/or written for these and hundreds of other comedians. Rosenfield is a member of the Board of Directors for the National Association of Schools of Theatre, the agency designated by the U.S. Department of Education as responsible for accrediting college, university, and private conservatory programs in the performing arts. He is the first board member in NAST’s history drawn from the field of comedy. His academic credentials also include a M.F.A. in theatre directing from Stanford University. Read his new book Mastering Stand-Up or visit him at www.stephenrosenfieldcomedy.com.