Halloween is here, which puts us in the mood for creepy tales. Debut young adult novelist Meg Kassel has written a twisting, turning speculative story with a unique angle. There are no pedestrian paranormal creatures in the Black Bird of the Gallows. Instead, a crow shape-shifts into a boy. Another has a hive of killer bees in his body. Both are after the girl next door. And that’s just for starters.

Mary Sullivan: The premise of this novel is so unique. A teenaged girl, Angie, has lost her mom to a drug overdose and has come to live with her health-nut dad in southwestern Pennsylvania. Soon a new family—replete with handsome son—moves in next door. But nothing’s simple about this boy-meets-girl story. The boy, Reece, is stalked by crows, and soon Angie finds out Reece is, in fact, part crow. He and his kind were cursed by ancient magic to be harbingers of death. He can sense impending disaster and is drawn to it, as crows are drawn to carrion. What was the inspiration for the crow element of this premise?

Meg Kassel: Ah, the original inspiration was actually the turkey buzzards seen circling the summer skies up here in Maine. I was fascinated by how these large birds made lazy circles in the sky, waiting for their next meal to expire so they could descend. Gruesome, but interesting! Originally, the story had turkey buzzards as the harbingers of death, but I swapped them with the crow because I needed a carrion bird that was frequently seen around humans—which turkey buzzards are not, thankfully (they’re pretty hideous). Honestly, I didn’t want to use crows, as they’re overdone in popular culture, but they fit the best with what the story needed, and also the habits of crows was an excellent match for the harbingers’ curse. 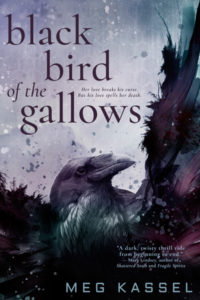 MS: Reece and his family aren’t the only paranormal creatures in Cadence, PA. Another stranger has moved in named Rafette. He has a swarm of venomous bees living inside of him. Rafette is drawn to chaos and causes it by making his bees attack. Anyone stung goes mad, causing death and destruction in their community. Is there a connection between the “birds and the bees”? How did you come up with this character?

MK: Ha! No connection to birds and bees in the reproductive sense, although it is a fun play on words! Rafette’s inspiration was partly taken from the urban myth of the Mothman, which was a real phenomenon that occurred in a West Virginia town in the 1960s, as well as two huge hornet nests that appeared in the same maple tree above our driveway one summer. You couldn’t get rid of one nest without enraging the other, so we had to leave them. Hornets were EVERYWHERE that summer and I was afraid every time I took my baby daughter outside. That fear worked its way into the manuscript and melded with the character I was forming. The result was Rafette, although I used honeybees instead of hornets because honeybees—like the true Rafette—are not aggressive by nature.

MS: Obviously you write speculative fiction. But romance also takes center-stage here. At first glance, harbingers of death, carrion, and mass casualty events don’t equate with that lovin’ feeling. Yet, forces conspired to bring Angie and Reece together. Talk about where you see the intersection of drama and love stories. How do Angie and Reece’s creepy circumstances augment their romance?

MK: I have always had a thing for the tragic hero, and high drama heightens all emotions. Characters put in survival situations reveal what they’ve got under the hood—their true character—so having a couple work to survive a mini-apocalypse can either cement their feelings for each other or splinter them apart.

MS: Unfortunately it’s impossible to watch the news without seeing horrible reports from around the world on war, disease, hurricanes, terrorism, etc. In your novel, there’s a reason for these tragedies: an ancient curse. It’s unclear whether the curse is the root cause of upheaval, but The Beekeepers certainly stir the pot. Were you looking to explain why bad things happen? What was your inspiration here?

MK: In this novel, it’s not the natural disasters that are caused by the curse (our planet is always in flux, shifting plates, etc.), but rather, the human reaction to them. I grew up and lived most of my life on the Jersey Shore, which experienced Sandy—one of the most devastating storms the region has seen. Friends who still live there told of people taking boats and going up and down the ruined coast in the aftermath, looting destroyed homes and setting fires. I couldn’t help but think, “What would make someone DO that?” It’s just so cruel, to plunder homes when the occupants have already lost everything. That’s where the inspiration for the Beekeepers’ sting came from—a fictional explanation of why some people do awful things during chaotic times.

MS: Book Club Babble readers are bookworms…and writers too! I had the pleasure of getting to know you at the Romance Writers of America (RWA) conference in 2016. Can you share your journey to becoming a published author? What advice can you give those of us who remain “pre-published”?

MK: My journey has been bumpy and surprising! I’ve come close to selling manuscripts more times than I care to think about, lost a publisher to closure, parted ways with an agent, and had to recalibrate my plan many times. There were times I seriously considered giving up trying to get published traditionally. By now, I’ve come to expect the unexpected! For me, it’s been like sailing on stormy seas, but I’m just crazy enough to say, I’d do it all over again (okay, maybe a few tweaks).

As for advice, well, it’s easy for writers to get discouraged and have our confidence shaken. It’s tempting to look around and compare yourself to the progress of others, but if you make a concerted effort to avoid this, you’ll write better and be happier. Look, some of your peers will get book deals or agents and bestseller banners on their Amazon book listings—before you. But, good news—the achievements of others have no bearing on your writing or your career. So, keep eyes on the path in front of your face, because it’s the only one relevant to you. Celebrate friends’ milestones, support them when they hit roadblocks, and always, always, always keep your focus on improving all the elements of your craft. Learning this early on helped me eliminate some unnecessary misery. I mean, there are enough legit sources of anxiety and self-doubt in publishing. Don’t manufacture more if you can avoid it.

MS: Meg, it’s been a pleasure to hear from you. Thanks for your time! Black Bird of the Gallows is available wherever you buy books. 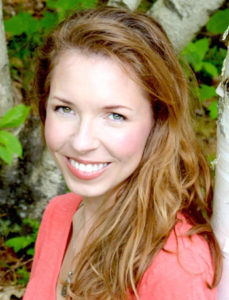 Meg Kassel is an author of fantasy and speculative books for young adults. A graduate of Parson’s School of Design, she’s always been creating stories, whether with visuals or words. She worked as a graphic designer before realizing the thing she did for pleasure (writing) was something she should do for real. Meg is a New Jersey native who lives in a log house in the Maine woods with her husband and daughter. A fan of ’80s cartoons, Netflix series, and ancient mythology, Meg has always been fascinated and inspired by the fantastic, the creepy, and the futuristic. When she’s not writing, Meg is reading, hanging out with her family, hoarding peanut butter cups, or playing video games. She is a two-time finalist and the 2016 winner of the RWA Golden Heart© contest in YA.