Amy: What do you think Tilly’s perspective would be if you recorded it extemporaneously?

Owen Thomas: If you mean what would Tilly’s perspective be if I had not given her the wisdom of a long life from which to tell her story, I think it would be a lot more confused, self-serving and inauthentic. She would be telling her story in a voice that wants to be liked and for which approval rather than truth is the ultimate objective. Like all of the characters in this book, Tilly makes decisions on the basis of hidden priorities that she does not fully understand. It takes Tilly many, many years for some of those decisions to make any real sense. At the time she experiences the events of her twenties and thirties, there are convenient decoy explanations for everything she does – including the state of her various relationships and all of her self-sabotage – and I think she would use those explanations to deflect any real responsibility for her circumstances. Like most people, Tilly spent a lot of time and energy locating the origin of her difficulties outside of herself. She was indomitable as a child, a hellion as a teenager, very headstrong as a young adult, stubbornly independent as a mature woman and always ferociously intelligent. It was a life-long struggle for her to really figure things out. Even well after Tilly’s time in Hollywood, she spent a lot of time in relationships that did not work out because she was still motivated by a history and relational forces she did not understand. Years of reflection tend to relocate responsibility for our actions and decisions inward. I needed the reader to have the benefit of that wiser perspective from the beginning. But told from a contemporaneous point of view, Tilly would have sounded a little more like David: a mess.

Amy: Hollis latches on to men he barely knows like Akahito Takada and Charles Compson and creates a false persona that paints them as near demi-gods. This seems to parallel the tendency in society to idolize movie-stars or sports heroes. What is it about the human character that causes us to believe in the goodness or evil or another without ever really knowing them? 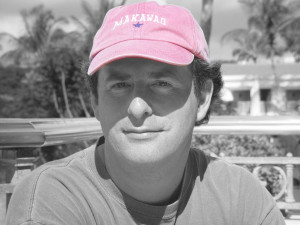 Owen Thomas: I think it has to do with our endless capacity for projection. The less we really know about the other person, the more useful they are to us; the more we are able to make them into whomever we need them to be. Akahito Takada and Charles Compson were externalizations of Hollis’ ego constructs. He projected the character traits by which he wanted to define himself onto these men that he never really knew, and then he created a reality in which these same men admired Hollis for the same traits. A good analogy can be found, of all places, in how the Bush administration manufactured credibility from its own misinformation. It goes like this: first Donald Rumsfeld and Dick Cheney leak to sympathetic reporters a version of the Iraq War that they would like to be accepted as true. Second, said reporters would then publish that imagined reality in their various publications. Third, Cheney and Rumsfeld would then show up on Meet the Press and quote the publication as evidence for their fantasy reality. The difference, of course, is that when Hollis projects his own fantasy onto Takada and Compson and then uses his society with these men as evidence of his own exceptionalism, he does so largely unconsciously. Sports fans are doing a version of the same thing when their team wins the big game and everyone goes home with their chests inflated and feeling a whole lot better about themselves than the day before. They have projected a part of themselves onto their favorite athletes and then re-injected that imagined association back into the veins of their own self-esteem, choosing to ignore that, individually, they had absolutely nothing to do with the outcome of that game. So this phenomenon is entirely normal in human society. The phenomenon in Hollis Johns is writ large for dramatic and comedic effect and to really show how it works.

Amy: At one point, Charles Compson says, “If I hadn’t been pretending to be such a good person I would have been a much better person.” How debilitating are the lies we tell ourselves?

Owen Thomas: The purpose of any lie is to misrepresent reality. Although some ethicists will certainly disagree, it is possible to conceive of a “white lie” we may tell to another person for the benefit of some value (avoidance of unnecessary pain or distress, for example) that in some circumstances we decide eclipses the competing value of pure truth. But it is hard to conceive of a “white lie” that we tell ourselves. They may be more or less harmful, but misrepresentations of reality to the self are inimical to personal growth. Even the worst of experiences can serve as grist for the mill of personal development. The lies we successfully tell ourselves are always, to some extent, debilitating. Stated differently, we should allow ourselves to consciously acknowledge the things we already actually know. Lying to ourselves is really an internal process of suppression, or convincing ourselves that reality is not real. Now, all of that is a very long ways from suggesting that self-deception is abnormal or always avoidable. As a species and as individuals, we are masters of self-deception. We persuade ourselves into believing all kinds of things that are not actually true, and for all kinds of reasons, from some mundane expediency to an artificial but convincing sense of self-satisfaction. We convince ourselves that we are patient when we are not; kind when we are not; smarter and wiser when we are not; better drivers than anyone else on the road when we are not. We tend to be very taken with ourselves, just as Hollis Johns is very taken with himself, and we tell ourselves some very kind stories. But that is not how we grow and evolve and mature. That requires truth. That’s what Charles Compson means when he says: “If I hadn’t been pretending to be such a good person, I would have been a much better person.”

Amy: David repeats, “I am an optimistic person,” so many times that it becomes a waving crimson flag that signals its opposite. Like his father, his fabricated conscious-level beliefs contrast with those of his true subconscious. And it is those deeply hidden beliefs that continue to rule his choices. Exploring this dichotomy is, for me, what makes The Lion Trees great. What intrigues you about this duality?

Owen Thomas: What intrigues me is that this is such an odd, but incredibly common signpost on the way to the truth about ourselves. As the circumstances of our lives bring us closer to the truth, the more we resist them by boldly declaring the opposite. The more painful the truth, the louder and more emphatic the declaration. We try to beat back reality with earnest assertions of the opposite of that reality. One is reminded of Queen Gertrude’s comment to Hamlet – The lady doth protest too much, methinks – not realizing that she is actually the person that ‘the lady’ on stage represents. David is hard-wired to believe he is doomed from the very beginning. His problem is that, deep inside where it really matters, he believes that no one will ever be inclined to believe in his innocence. He believes he is destined to be wrongly accused and that, once again as always, he will end up sacrificing himself on a pyre of good intentions. David has written the ending to his story before his story has even started. And yet, over and over, he boldly declares the opposite: I am an optimistic person. The truth is that he is not an optimistic person. History, and his interpretation of it, has made him a fatalistic person. But that truth is a painful one, so he resists it. We are right back to self-deception. David-the-optimist is a character in a fairy tale he tells himself so that he can get through the day believing there is hope and that everything will turn out okay. The problem is that David cannot become a truly optimistic person until he acknowledges, and then defuses, his fatalism. It is another good example of how self-deception is debilitating. The I’m-an-optimist fairytale feels helpful, and is certainly a kinder reality in the moment, but it is obfuscating the rules by which David is really living, enabling one of his greatest weaknesses, and inhibiting his growth as a person. All of the characters in The Lion Trees experience that same tectonic slippage between what they say about themselves consciously and what they “know” about themselves subconsciously. That friction always makes for interesting earthquakes.