With her sophomore novel, Two Can Keep a Secret, Karen McManus expertly captures the young adult voice and blends it with page-turning suspense to deliver another bestseller. In the creepy New England town of Echo Ridge, secrets abound. Someone is killing beauty queens. True crime buff and recent Echo Ridge transplant, Ellery Corcoran, is determined to figure out who, because decades early, her mother’s twin sister had been a victim too.

Tabitha Lord: You had stunning success with your debut novel One of Us is Lying, which spent 73 weeks as of January 16 weeks on the NY Times bestseller list. Did your life, or at least your writing life, change as a result?

Karen McManus: My life changed a lot with the success of One of Us Is Lying. I had always assumed that writing would be my second job; something that I did at night and on weekends while maintaining a day job to support my son and myself. It took nearly a year of consistent sales, both in the U.S. and internationally, before I worked up the nerve to take the plunge into full-time writing. I’ve been doing that since April 2018 and I love it—but I’m realistic about the ups and downs of publishing, and I know it might not be forever. Still, at the moment I’m able to meet my deadlines and take on new projects, attend events and conferences, read widely both within and outside my genre, and schedule school visits. It’s been wonderful so far.

TL: Did you have any anxiety about this book after the fabulous success of the first?

KM: Oh, yes. I wasn’t very far along in drafting Two Can Keep a Secret when One of Us Is Lying launched, and I was already 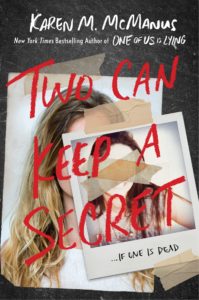 struggling. Second book syndrome is a very real thing for authors—it’s often the first time you are writing under contract, on deadline, with a lot of new voices (editor, agent, readers, reviewers) in your head. On top of that, One of Us Is Lying took off in an unexpected way, and that froze me for a while. It wasn’t until I had a long conversation with my agent about the story I wanted to tell (agents are seriously worth their weight in gold) that I got unstuck and wrote a draft I was happy with. But still, right up until early reviews started coming back on advance copies, I was anxious. It’s been a joy and relief to see the positive response.

TL: Both One of Us is Lying and Two Can Keep a Secret blend coming of age angst with well-crafted, page turning suspense. Which came first – your desire to write young adult fiction or the suspense/thriller aspects of the stories?

KM: Definitely the first. I’ve occasionally joked that I became a thriller writer by accident—with One of Us Is Lying, my primary interest was telling the stories of the four characters who were in the room with Simon when he died. I was nearly halfway through the first draft before I fully grasped that I was writing a mystery and should include, you know, clues. With Two Can Keep a Secret, I did at least know from the start that I was writing a mystery (and I have the detailed outline to prove it!), but the parts of the story that absorbed me most were the struggles and growth of the two main characters.

TL: Two Can Keep a Secret is written from two different characters’ points of view. Can you talk about that choice, and tell us little about Ellery and Malcolm?

KM: I felt like dual POV was necessary to tell this particular story because it’s about the ripple effects of an unanswered questions—what’s happening to the girls of Echo Ridge? Ellery and Malcolm represent two sides of the unsolved mystery coin: her aunt disappeared, and his brother is a suspect in his girlfriend’s murder. So they’re coming at the town’s secrets from very different perspectives: Ellery is desperate for answers, and Malcolm is afraid of what he might find out. Yet they feel an instant connection with one another, and that dynamic created interesting tension as the stakes get higher.

TL: When writing a mystery, nailing the ending is pretty important. You successfully weave various plot threads together and form them into a satisfying conclusion for readers. Did you know from the start how you were going to end the story, or did the ending evolve as the characters and plot developed? I’d love a little insight into your process, without spoilers of course!

KM: Two Can Keep a Secret was interesting because it started with the kernel of an idea: something terrible happened in the past, and is echoed in a new mystery (which is where the name Echo Ridge came from). But it took me a while to find the right story to fit that concept, so I wrote a couple of drafts where events unfolded differently. They never felt right until I hit on what ultimately became the final version. Even then, although the plot had gelled, it took a few cycles of revision to make everything fall into place, and end on what I felt was the perfect note.

TL: You’ve mentioned that the inspiration for One of Us is Lying was the 1980’s movie The Breakfast Club. Where did you get the idea for Two Can Keep a Secret?

KM: I wanted to challenge myself by writing a very twisty mystery, and I felt like one way to do that would be to take one of my all-time favorite settings—a creepy small town—and have it be home to a lot of unsolved mysteries that may or may not be related. I’ve always been interested in the power of secrets. That was one of the things I explored in One of Us Is Lying: what people will do to protect hidden parts of themselves, and what happens when those parts are exposed. There’s a similar theme in Two Can Keep a Secret, but here it’s even broader, because generations of secrets have piled up in this one small town.

TL: Do you have a favorite character? If so, who and why?

KM: Ellery’s twin brother Ezra has a special place in my heart. In some ways he’s a stand-in for the writer in me, as the observer and commentator to all of his sister’s true crime theories, but he’s also quietly passionate about the things he cares about. Readers seem to be responding to him as well, and I’ve had multiple requests for an Ezra book. At the moment I’m not planning one, but you never know!

TL: I assume you’re working on the next bestseller! Can you give us hint?

KM: I announced over the summer that I’m writing a sequel to One of Us Is Lying, which will be published in January 2020. It might be more accurate to call it a companion book, since it features new POV characters, including Bronwyn’s younger sister, Maeve. The original four are present and woven into the story, but they’re secondary characters within this new mystery. I’m also working on a fourth book that’s another standalone YA mystery, similar to Two Can Keep a Secret, that will come out in 2021.

TL: Thank you so much for chatting today, Karen. I look forward to your next release!

Karen M. McManus is the New York Times, USA Today, and internationally bestselling author of the young adult thrillers One of Us Is Lying and Two Can Keep a Secret. Her work has been translated into 39 languages. Karen lives in Massachusetts with her son and their rescue dog. She holds a master’s degree in Journalism from Northeastern University, which she uses to draft fake news stories for her novels. You can find Karen at @writerkmc on Twitter and Instagram.