Long before her years as an X-Files Federal Agent, Dana Scully used her sharp intellect as a divining rod for the truth. In Jonathan Maberry’s Devil’s Advocate, set in Craiger, Maryland, the curious fifteen-year-old wants to know if the strange being from her dreams is an angel or a devil. Beginning to realize the significance of this figure, and of other images from her visions, she traces her way through a terrifying dreamscape, trying to piece together how or if it corresponds to reality.

The young Scully wants to believe but insists that things should make sense, which, unfortunately, they don’t. When multiple people die in mysterious automobile accidents, she quickly realizes the statistics don’t add up. Although her parents and other adults in the community won’t admit something’s terribly wrong, she tenaciously pursues the truth even as it leads her further into the land of her nightmares.

Jonathan Maberry tells the story of young Dana Scully with the same intensity and enthusiasm he approaches his multitude of projects. Despite his prolificness, it seems as though each new enterprise becomes his newest favorite, and you can rest assured you’re going to get his very best – over, and over, and over again. Devil’s Advocate weaves a beautifully intricate tale from the fabric of good and evil, stretching reality into the recesses of hell. It runs on an adrenaline high from beginning to end, and readers will find themselves racing through the pages.

We’re so thrilled Jonathan is joining us today to answer some questions about the book.

Amy M. Hawes: Given the universal success of The X-Files, the idea to write backstories for teenage Scully and Mulder is brilliant. When was the concept born and how did you get involved?

Jonathan Maberry: The process began when I was having lunch with Ted Adams, CEO of IDW Publishing. They do the wonderful X-Files comics. Ted and I met to discuss the possibility of my editing one or more anthologies of original stories of Scully and Mulder. I said that I could get some heavily credentialed writers on board. He liked the idea, and it was run past FOX and Chris Carter so that we could get permission to do the books and approval for the stories to be official canon. The first volume, Trust No One, sold out immediately, which demonstrated how much interest there was in The X-Files. For the second volume, I wanted at least one story about Fox Mulder as a teenager and invited my friend Kami Garcia to write it. She did, and her story, “Black Hole Son,” 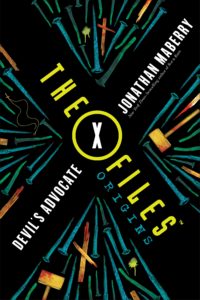 was frankly amazing. While I was editing that volume (The Truth is Out There), I started talking with Ted and Kami about the possibility of going deeper with stories that explored the forces at work in the lives of Mulder and Scully that eventually turned them into the agents we know so well. IDW wasn’t set-up to do prose novels, so Kami and I took the project to Erin Stein at Imprint, a division of Macmillan. Erin is as much of an X-Files geek as Kami and me, and the deal was done, with Kami continuing to work with teen Mulder and my tackling the backstory of Dana Scully. I suggested the name ‘X-Files Origins’, and it worked for us. And IDW grabbed onto it, too, and launched a new comic focusing on Scully and Mulder as kids, set two years before the novels.

AH: Devil’s Advocate, lifts the veil on Dana Scully’s experience as a fifteen-year-old. X-Files fans know her as a skeptic, yet the first line of the book begins with Dana saying, “I want to believe.” How did you lay the groundwork to get from her wanting to believe to wanting to explain it all away?

Jonathan Maberry: There are hints all through the TV show that Dana used to believe much more strongly than she did by the time she first met Mulder. And it’s established that she has some psychic gifts. She saw her father’s ghost in the episode Beyond the Sea, for example. So I looked back from that point with the question: “How did she go from believer to skeptic?” Knowing that the Syndicate–the group the Cigarette Smoking Man worked for–had been in operation for decades before we first meet Scully and Mulder, I decided to explore how they may have been involved in things behind the scenes. Everything in Devil’s Advocate squares with the TV series.

AH: Dana’s sister Melissa has hippyish, new-age predilections. Even in her younger years, Scully remains firmly grounded in the scientific method. Still, she loved her sister and it seems as though Melissa’s interests helped Dana to take a softer attitude towards alternative approaches. What influence do her sister’s beliefs wield?

Jonathan Maberry: I grew up at the end of the Hippy era, and a lot of my friends were involved in the New Age movement from its beginnings in the late seventies. It’s a world I know very well. Melissa is both true to the character in the show but also true to several women I’ve known over the years – including some I still know! Her optimism and belief that there are greater forces at work in our world than those involved in mundane matters like politics is encouraging. And there’s a fine line between steadfast optimism and naiveté that is not easily erased, and Melissa walks that line very nicely.

AH: The Scully children are military brats. Do you think the constant shifting of locations, the inability to take root anywhere, influenced Dana to latch on to the comforting concreteness of science?

Jonathan Maberry: Melissa, being a more gregarious and optimistic person, adapts more easily. And she’s a bit older than Dana, who is much more solitary, introspective, and socially inept. The two sisters are supportive of each other, though, and despite their differences, they have learned to rely on one another and be there for each other. Individually, Melissa’s acceptance of the ‘larger world’ of spirit is her safe space, and Dana finds solid footing in science.

AH: The person we know as Agent Scully had psychic abilities in her youth, probably the last gift she wanted. Tell us about her struggle to reconcile what she experiences with what she believes.

Jonathan Maberry: That would involve way too many spoilers!

AH: “Dana liked to read ahead and get ready for whatever the teachers were going to throw at her. One of her greatest fears was being unprepared for a pop quiz.” That’s the future agent I know! But the experiences she has in Craiger, Maryland are things she can’t study. However, she does find a way to use her research skills to uncover the messages in her psychic abilities. Was it fun to layer the two?

Jonathan Maberry: It was. Dana is a bit like Hermione Granger. She is practical, pragmatic, intelligent, and thorough. And she applies that approach to schoolwork, her investigation of the deadly events in Devil’s Advocate, and even to the world of spirit Melissa has been drawing her into. Even as a believer she is a skeptic in that she likes evidence, she wants things she can measure.

AH: In Devil’s Advocate, Dana’s grandmother exhibits symptoms of Alzheimer’s or a similar disease. But sometimes she sees her grandchild more clearly than anyone else. Why did you decide to give her these insights?

Jonathan Maberry: My father-in-law, the jazz musician and orchestra leader Alvy West, went through years of dementia. I’ve used that as a subtext in my zombie novel, Dead of Night. I also based her, to a great degree, on my grandmother, who was a very intelligent and well-read woman who firmly believed in the larger world of spirit. While Dana and Melissa’s father, William Scully, is all facts-and-figures, and their mother has been cowed into silence, their grandmother keeps the door open to many other possibilities. This is complicated by the fact that she is gradually losing her faculties. Her brief moments of clarity are somewhat enigmatic, even chilling, because they show that she really does have great and useful knowledge, but sadly it’s locked behind the doors of a wasting disease. If we do more of these books you can expect that aspect to be more deeply explored.

AH: In the novel, you detail astral projection, yoga, psychic abilities, and other phenomena. Are these things you’ve experienced or do they represent an area of interest you’ve researched for the book?

Jonathan Maberry: I’m very knowledgeable about psychic and spiritual phenomena, but I’m closer to Scully than Mulder in my belief. I want to believe but I like some proof. That said, I’ve also been involved in martial arts for over fifty years and have been practicing yoga and meditation as well. And I’ve done a ton of research into psychic phenomena and the supernatural for the various novels, short stories, and comics I’ve written. And I wrote five nonfiction books on supernatural monsters. So, yes, this is an area I know very well.

AH: I’ve been re-watching X-Files episodes with this story in mind. It’s funny how you read into things once you have certain ideas in your head. Did you re-watch to help you create the backstory for Scully?

Jonathan Maberry: I re-watched every episode, and some of them multiple times, particularly the ones that involved Scully’s back-story. I also re-read the excellent X-Files novels by Charles Grant and Kevin J. Anderson, which were published when the show was still on the air.

AH: I noticed in your credits that you consulted Chris Carter, Gillian Anderson, and the X-Files team about this novel. How did they assist in the creation of Devil’s Advocate?

Jonathan Maberry: I didn’t speak with Gillian, but I thanked her in the book. For her performance and for the many interviews she’s done over the years where she gave insight into the character of Dana Scully. As for series creator Chris Carter, he had to green light all of this, along with FOX, and he’s the true Godfather of the X-world. The team at FOX were extremely helpful in getting this project –and my anthologies for IDW—off the ground, for helping us ensure that the stories are in continuity, and for being cheerleaders throughout this process.

Jonathan Maberry: We’re going to have to wait and see…though Kami and I are certainly primed to tell more stories.

Jonathan Maberry is a New York Times bestselling author, multiple Bram Stoker Award winner, and Marvel Comics writer. He’s the author of many novels for adults and young adults, including Assassin’s Code, Dead of Night, Patient Zero, and Rot & Ruin. His nonfiction books cover topics ranging from martial arts to zombie pop-culture. He lives in Del Mar, California, with his wife, Sara, and their son, Sam.