Reading Robert Dugoni’s The World Played Chess is akin to dabbing on a pleasing perfume. As it seeps into your skin and melds with you, you realize the synergy between scent and skin has created something extraordinary. Dugoni brilliantly winds his way through three narratives. The first is Vincent Bianco’s present-day life, in which he navigates the deceptively mundane waters of suburbia with his wife and their two teenagers. The second is Vincent’s memory of the time he spent working on a construction site with the wise and kind Vietnam veteran William Goldman. The last component of the triad is William’s Vietnam War Journal, which he’s recently sent to Vincent.

Once you begin to read, a fourth narrative asserts itself. These are the readers’ personal and/or family stories about the Vietnam Era, the photos and newsreels, and the emotional impression they hold of the war. There is also the conjured brain-image of the boys who were sent to Vietnam and came home broken men with no way to process the horrors they’d endured. These blend with Dugoni’s narrative strains to create a beautiful symbiosis of writer and reader, making the most complex and subtly intoxicating perfume. The World Played Chess will pull up a different emotional landscape for every reader who turns its pages, creating a living, breathing novel that will live as long as there are those to read it. 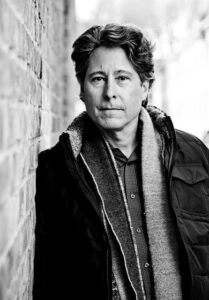 Robert Dugoni is the critically acclaimed New York Times, Wall Street Journal, Washington Post, and #1 Amazon bestselling author of the Tracy Crosswhite police series set in Seattle, which has sold more than 6 million books worldwide. He is also the author of The Charles Jenkins espionage series, and the David Sloane legal thriller series. He is also the author of several stand-alone novels including The 7th Canon, Damage Control, and the literary novel, The Extraordinary Life of Sam Hell – Suspense Magazine’s 2018 Book of the Year, for which Dugoni’s narration won an AudioFile Earphones Award; as well as the nonfiction exposé The Cyanide Canary, a Washington Post Best Book of the Year. Several of his novels have been optioned for movies and television series.

Dugoni is the recipient of the Nancy Pearl Award for Fiction and a two-time winner of the Friends of Mystery Spotted Owl Award for best novel set in the Pacific Northwest. He is also a two- time finalist for the International Thriller Award, the Harper Lee Prize for Legal Fiction, the Silver Falchion Award for mystery, and the Mystery Writers of America Edgar Award.

Robert Dugoni’s books are sold in more than twenty-five countries and have been translated into more than two dozen languages.