I tried to come up with a category for Noah Lemelson’s debut novel, The Sightless City, but had a tough time putting a box around it. It’s a fantasy, but I’d also use words like thriller, steam-punk, and even horror noir to describe it. Despite my lack of neat classification, the story is complex, well-written, and interesting!

Marcel Talwar is a veteran turned private investigator. He’s scarred by war, but proud of what he fought for, until he realizes that all is not as it seems. Manipulative forces are at work, using Marcel and the citizens of his hard-won city like chess pieces for their own gain. Magic, mayhem, and a mysterious substance known as aether feature alongside a motley cast of complicated heroes and sinister villains.

It’s a pleasure to feature Noah Lemelson today on BCB!

Tabitha Lord: I was really impressed by your extensive world building. The culture you’ve created is complex, and the history 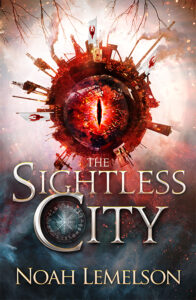 well-developed and interesting. How did you map everything out and keep all the intricate details sorted in your own mind?

Noah Lemelson: I’ve always like world building. I crafted fantasy universes in my head when I would walk around by myself, which I did often, (I wasn’t the most sociable teen.) One day in college my uncle suggested I write it all down. So, one summer I wrote up a first draft of the history of this world, as well as some other details, geography, species, ect. That was very useful, as when I got more into writing I had a ready setting for my first novel. Since then, I’ve written down more notes, usually poorly organized. After I finished my drafts, I try to go through and check if the world details are consistent, as even with these notes, there is plenty of stuff I make up on the fly.

TL: The story features humans but other human-like creatures as well. Can you give us a brief run-down of the various sentient beings that live in your world?

NL: The other-folk are a mix of different peoples who seem related to humans. Some, including the Kortonians, Malva and Salvi are known to have descended from human beings directly. They are three of the most common other-folk within the UCCR and the Principate. Kortonians are short and square-headed, they live among humans and often work as craftsfolk, scholars, or engineers. The Malva rule a sea-borne empire of pirates. They are tall, with angular features and metallic-tinted hair. Though like any people, individual Malva can be kind, but the Thalassocracy overall is cruel, pushing an ideology of violent ethnic superiority. The Salvi are the Malva’s slaves, giants with gray skin and horns. Many have fled the Thalassocracy to live in the UCCR.

Then there are the Ferrals, furred, bestial-featured people from the eastern forests. Some have moved into the UCCR, where they face discrimination. Mutants are also discriminated against. Born from ætheric accidents or the Calamity, mutants have crimson skin, horns, and a variety of maladies. Children of mutants are also mutants, but their mutations take on a more regular appearance, and they are as healthy and fit as any human, though with red skins and their signature horns.

There are a number of other other-folk as well, such as the elementally-attuned Vulkers or the photosynthetic Oawhti, but they don’t appear much in the series.

TL: This book blurs the line between fantasy, steam-punk, mystery, and horror. I love writing across genres as I think it allows a certain freedom and creativity of storytelling. How would you best describe The Sightless City?

NL: I’ve always been terrible at describing The Sightless City. For a while I was going maximalist, calling it a post-post-apocalyptic dieselpunk fantasy with noir elements. Personally, I’ve never been persnickety about exact genre labels or definitions. My mother still calls it sci-fi, and I’ve accepted that that’s close enough. It is arguably science-fantasy if you want to call it that.

I think the best label came from my CalArts mentor Brian Evenson. He declared it “rustpunk.” Which is amazing, except no one know what it means. So yeah, if I had one portmanteau, it would be rustpunk!

TL: Crafting a good villain is an art form. Without spoilers, what were you thinking about as you developed the villains in your story?

NL: Early on I wrote a chapter kind of going into the villain’s backstory, but I ended up scrapping it, as it essentially boiled down to “before he was a villain, he was also a terrible person.” I think I got obsessed with the idea that villains should have empathetic backstories. And that can be good, I’ve written villains like that, villains you understand where they’re coming from. But certain events in politics and the world have helped me realize that some people are just… awful. Sure, they have reasons for why they became terrible people, but those reasons don’t make them either likable or logical. Some people just believe the world owes them everything, that they are special and everyone else is worthless, and when these people don’t get the everything they want, they become bitter and vicious. If these people happen to be in positions of power, they can do a lot of damage to the world.

Of course, that’s just one possible way to write a villain. Villains comes from some disfunction, either in themselves or the world or both. Though my main villain is fundamentally a selfish person, I have another villainous POV in several chapters. This character is neither selfish nor arrogant. He is humble, hardworking, and dedicated to following his moral code. The issue is, his moral code is repugnant. He is not evil out of disposition, but because of ideology, he has correctly seen that there is something wrong with the world, but has a terrible idea of how to fix it. For his whole life he has lived in an amoral morass, and now he has been given a moral guideline, and a community. In return he only has to commit violence upon those his religion has claimed are unworthy of sympathy. This is another sort of villain, the person who in the right situation would be an upstanding member of society, but who has fallen to a destructive ideology.

And then there’s Verus. He’s just a prick and doesn’t care if you know it.

TL: Were you always planning for The Sightless City to be the first in a trilogy, or did the story grow as you were writing it?

NL: Originally it was going to be one book. I showed the outline to my mentor, and he asked me if I was sure it wasn’t a trilogy. I told him defiantly that I knew it was one book and would always be one book.

A week later I told him that, yeah, it was a trilogy.

The Sightless City is actually the first third of what that original book would have covered. I already had written a partial draft of most of the whole thing, so I’m converting the second section of that into a longer, better written full book.

TL: So, your undergraduate degree is in biology, but you’ve become a speculative fiction writer! Can you tell us how a little about that journey?

NL: I was always interested in biology, particularly questions related to the human mind and other intelligent animals. After college I was interning at labs while also doing writing classes at UCLA Extension. It was a difficult choice about whether I wanted to focus on animal behavior, or creative writing, I know some people are able to do both PhD programs and novel writing, but I knew for myself that wouldn’t work out. In the end I realized I both enjoyed writing more and was better at it (research is hard!) I’m still interested in many of the same questions about human nature and our place in the universe that first got me interested in science, but now I explore them through writing.

TL: Tell us five things, unrelated to writing, that your readers and fans might like to know.

NL: I think I front load my interestingness into my writing. I am a person of excessively mild temperament, exempting when I am hungry. But I’ll try…

I studied primate behavior in college. I even did an abroad quarter in Paris studying primatology and primate evolution. That quarter I earned 3 A’s and a D. The D was in French.

I took a cab ride across Cuba. It took 17 hours. The cab driver stopped to buy gas in the back of someone’s yard, where they had siphoned the fuel from a local airport.

I’ve done scuba. Only once, but it was pretty neat. I saw a very large fish. I never got my certification because I am bad with paperwork.

In high school I was part of a secret society whose purpose was to hide what our purpose was. We wore fezzes and gave out free lunch meats. I have a cat.

She likes to bite me. Or rather, lunge with her teeth out at the back of my knee. I think she knows it’s her best shot for taking me down. If I disappear one day, you know what happened to me.

TL: That’s really funny! Thanks so much for chatting today, and best of luck with your brand new release!

Noah Lemelson is a short story writer and novelist who lives in LA with his wife and cat. Lover of Science Fiction, Fantasy, New Weird, and Punk. He received his BA in Biology from the University of Chicago in 2014 and received his MFA in Creative Writing from the California Institute of the Arts in 2020. He has had several of his short stories published in both print and online magazines, such as Allegory, Space Squid and the Outsider’s Within Horror Anthology.