Ms. Birkelund’s style is fresh and insistent, bringing a lively sense of importance to her words and her story. Reading The Runaway Wife is akin to taking an invigorating walk through beautiful surroundings as you inhale the rich, fortifying air. Which is precisely what her protagonist Jim Olsen does after three French sisters, Clio, Thalia, and Hélène, persuade him to track down their mother Calliope in the Swiss Alps. Calliope’s escape from her controlling, cheating, politician husband, and Jim’s ambivalent relationship with the predictable path of his life makes their encounter a two-sided rescue mission.

The novel is like a Matisse cutout–by leaving in only that which is essential, it is both stark and richly informative. The Runaway Wife is a unique tale, tenderly capturing the essence of despair and hope. We’re thrilled Ms. Birkelund is chatting with BCB today.

Amy M. Hawes: The landscape and weather patterns become another character in your story, creating a sense of place physically and, also, emotionally. The setting of each scene brings forth a humming background vibration, harmonizing with your characters, or challenging them with the natural violence nature sometimes exhibits. Have you spent time in the Swiss Alps? How were you able to give such personality to the land and weather?

Elizabeth Birkelund: Hello Amy, it’s nice to e-meet you. Yes, I have spent several summers hiking and several winters skiing in the Swiss Alps. Each time I’m in the Alps, I fall in love with the soaring heights of the mountains that train my eyes upwards, and the way the cows with their tinkling bells in the meadows below keep me grounded. I love the mountain air that clears my mind, and the sight of the dancing wildflowers amidst rock that remind me that beauty can sprout next to slabs of slate. I’ve been on steep inclines with no ropes for protection and in suffocating winter white outs, all of which are a reminder of mortality. The intensity of the Alpine conditions often make me feel as if nature is inside of me, or conversely, that I’m a part of nature.

AH: While we’re discussing spending time in the Swiss Alps, I’d love to hear your thoughts on how nature’s beauty obscures time. Jim observes, “How inadequate a measure of hours and minutes were to mark the passage of time in the Alps. You couldn’t swallow 6 a.m. as Jim now drank in the pink lure of sky . . .”

EB: It happens to me after many hours hiking in the mountains, and this can happen anywhere when I’ve been in a natural surrounding for some time: I lose a sense of man-made time and begin to feel the earth’s timing in terms of sunrise, sunset. How many sundials one can read amidst the mountains as the shadows grow longer during the day! How many rosy dawns announce the start of a new day? That’s when you’re keeping time. Ideally, and this takes time and distance with no schedule, you can lose the sense of time, and what freedom there is in that! Fear also! As in a whiteout!

AH: I was intrigued when Olsen’s French friend says of him, “In addition to your very American accent, you have a look in your eyes that the world is yours, or could be yours at any moment–and that, my friend, among Europeans, is American.” I know you’ve spent time in Europe and particularly in France. It’s understandable this would give you a perspective of the French but does it also give you a unique perspective of Americans?

EB: Yes, it’s great to see ourselves from another perspective. I’ve picked up a lot from my European friends about their views of Americans. They admire the entrepreneurial spirit of Americans. I wonder if there’s anywhere else in the world where you can grow up thinking you can be anything you want to be. It’s a gift that I think we Americans take for granted. The Europeans also admire the generous spirit of Americans, their willingness to give of themselves to others and their wealth to great causes. 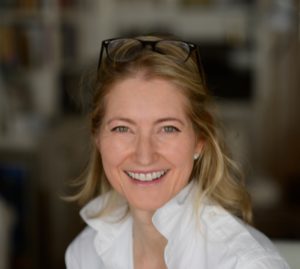 AH: I love how you take the time to crystallize an image or a thought with sparse, perfectly chosen words. At times, they seemed like word equations that translate ideas. You’ve worked as the personal finance columnist for Cosmopolitan. Am I correct to assume you have a talent for mathematics? If so, did this influence your desire to make each word have a precise meaning in your sentences, or as I’ve called them, word equations?

EB: What a great question! I don’t necessarily have a talent for mathematics. When Helen Gurley Brown hired me to write the personal finance column, she asked me if I had ever bounced a check. I hesitated and admitted that I had. At that, she smiled and said, “You’re hired!” She wanted a writer who could communicate to the Cosmo Girl. I do care very much about words. I spend much time with the Oxford English Dictionary looking up word origins. The word I’ve just looked up is “Escape.” It is from the Latin: Ex Cappare, meaning literally “to get out of one’s cape, to leave one’s pursuer with just your cape.” Isn’t that wonderful? Taking Latin in high school exposed me to the exciting world of words. I think “word equation” is a wonderful concept. A great title for a book or a poem!

AH: While describing Jim’s attraction to the French sisters, Hélène, Thalia, and Clio, and later, their mother Calliope, you do an excellent job of making his feelings believable and understandable. In different hands this task could have been unsuccessful, causing the reader to either not believe in his self-restraint or doubt his character because he is drawn to both the mother and the daughters. Tell us how you were able to construct such a likeable and believable character in Jim?

EB: Likeable and believable characters: I suppose if you are true to yourself and about yourself, the better able you are to create characters with desires and dreams with whom the reader can identify. To create a three-dimensional character, to know what he or she feels in the depths of their being, the fears, the dreams, what little things trigger feelings, what she or he carries in a pocket, is the writer’s challenge!

AH: I have to know, is there a backstory to how Yves Castelane, Calliope’s cheating husband, captured his beautiful muse, Calliope? Can you tell us more?

EB: In the backstory, when Yves met Calliope, he enveloped her with everything he had, his powers of physical seduction, his intelligence, his knowledge of the world, his charms. She was blinded in many ways by this all-encompassing ardor and attention.

AH: Speaking of muses, Calliope and her three daughters are all named after muses. What inspired you to this notion? And, are you a writer who lets the muses come to you through inspiration, or do you have a more calculated approach?

EB: Muses. I grew up in a room with paintings of the nine muses. I didn’t realize until I wrote The Runaway Wife that these paintings had been a major influence. After reading about the muses in school, I became frustrated with women who were satisfied to be the “Great Woman behind every Great Man.” Perhaps I should write a story about a male muse?! For my writing, my muses are the great authors that I continue to learn from and who inspire me, like Virginia Woolf, George Eliot, James Joyce and others. It’s too difficult to wait for a muse to come. You write and just hope for a visit every once in a while.

AH: It’s wonderful how you entwine two fairly common themes in an uncommon way. There is the unfaithful politician who needs the show of stability his wife offers and then there’s the idea of a physical journey becoming an emotional one. When you set out were you determined to put together a story in a way you’d never seen done before or did it happen organically?

EB: The story evolved organically, but I set a road map (an outline) before I began so that the themes would integrate and align and so that I wouldn’t get lost–in the Alps and in the hearts of my characters.

AH: The Runaway Wife is difficult to place in a specific category. While your writing style lends itself to literary fiction, it is tightly written and full of action, which literary works rarely are. It has a romantic feel to it, but is certainly not a romance. On what shelf would your book be most at home? On another note, do you think the decrease in bookstores and the increase in online buying of books and eBooks has freed authors from worrying about what shelf their book will go on?

EB: I suppose the greatest freedom when writing a book is not to have to imagine which section in the bookstore one’s book belongs. Ideally, the novel emanates from a deep part of oneself to communicate to a deep place in a reader’s heart. But also one wants the reader to enjoy it and have fun! If I had to choose, I would choose a shelf of literary fiction.

To answer the second part of this question–I LOVE bookstores. What writer doesn’t? I think genres and categorization still exist in the online buying and eBook world. I am grateful for ALL bookshelves!

AH: Thanks for chatting with BCB! Best of luck with The Runaway Wife!

EB: Thank you, Amy, for your interest and your appreciation!

Elizabeth Birkelund is the author of one other French-inspired novel, The Dressmaker. As a freelance magazine journalist, Elizabeth was the personal finance columnist for Cosmopolitan and wrote for more than fifteen years for Working Woman, Self, and Glamour, among other publications. She lives in New York City.