If you love thrillers and are looking for a new author to follow, look no further! Dolores Redondo’s pace and style pull you into the story from the first page and her protagonist Amaia Salazar is utterly superb – a beautiful, smart, bad-ass who has a sixth sense for the truth! There’s a reason why Redondo is renowned worldwide for her literary thrillers!

The North Face of the Heart is set in 2005 New Orleans around the time Hurricane Katrina is about to strike. A serial killer known as the Composer has been using natural disasters to provide the scenery for his kills, and it looks like his next destination is New Orleans.

The Composer isn’t the only demon Amaia needs to hunt down. Her past is raising its ugly head, threatening to steer her away from what’s most important – stopping the killer before he has the chance to arrange another of his deadly compositions. 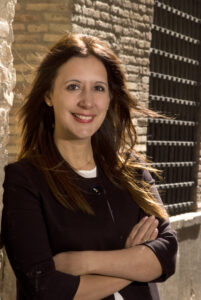 Dolores Redondo, one of Spain’s most popular and bestselling authors, has earned many accolades and legions of global fans for her powerful literary thrillers. Her novel, All This I Will Give to You, a Planeta Prize winner, was published in English in 2018 to great critical acclaim. Her Baztán Trilogy, comprised of The Invisible Guardian, The Legacy of the Bones, and Offering to the Storm, has sold more than 2.5 million copies in Spanish, has been translated into more than 35 languages, and was adapted into a film series available worldwide on Netflix.