Stephanie Gangi’s debut fiction novel The Next earns its place as my favorite book of the year! Joanna DeAngelis is dying of cancer. And she’s angrily cyber-stalking her ex-lover. In fact, she carries her rage straight into the afterlife, where as a ghost, she continues to torment him. While her twenty-something daughters grieve and learn to let go, Joanna, in her alternate realm, must eventually do the same. Sexy, smart, and poignant, The Next is sure to be a popular book club pick. I’m so pleased to welcome Stephanie Gangi to BCB today. 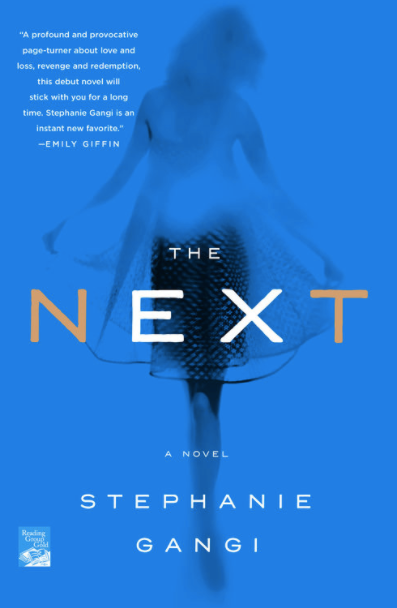 Tabitha Lord: You’ve skillfully combined elements of a page-turning thriller with the deep, complicated relationships typical of women’s fiction. And it’s a ghost story! Where did the spark for this book come from? Was it a ghost story first?

Honestly, the story originated with heartbreak, my own. My broken heart happened to coincide with the mega pop hit by Adele, Rolling in the Deep. That song was everywhere as I walked the streets of Manhattan, trying to keep myself together in the wake of a bad break-up. There’s violence and a “crazy-ex-girlfriend” drive to the lyrics and it felt like a soundtrack. I wanted to explore a woman’s rage, the thing she usually suppresses – or I do, anyway – the kind of rage that men dread. She’s really mad and completely unleashed.

To me, the worst betrayal would be to leave a woman in her most dire hour of need. What would happen if she was sick, weak, facing the end of her life? What if her rage lived on? And the only way to resolve it, to “get over it,” was revenge?

TL: This is Joanna’s story, but it’s also Anna’s and Laney’s. How did you determine how much time would belong to Jo and how much to her daughters in crafting the novel?

SG: So all that rage I just mentioned – how much can one novel bear? It began as Jo’s story, but I couldn’t have her just rant on and on – she’s already pretty intense. Yet I didn’t want to shy away from her anger. My “solution” was to alternate the story lines, and try and pull back from the rage and revenge story, give the readers, and myself as the writer, a break from the intensity and show the woman inside the ghost … through her beloved daughters.

I have beloved daughters of my own, and as an only child, it’s been so satisfying to see the sister bond between them! I admit, I’m a little envious. As a writer, I’m fascinated with how sisters interact. They can be the most brutal with each other, and yet, profoundly tender and supportive. They have a secret language. I wanted to capture all of that that. I’ve been gratified by readers who see The Next as a sister story, as well as a mother-daughter story.

TL: The girls’ journey through grief is told with such emotional authenticity. There is sorrow and disappointment, anger and fear, but also healing and joy. Were you drawing on personal experience as you led the sisters through this loss?

SG: I actually teared up reading this question, so I guess the answer is absolutely. Yes. I’ve been disappointed. Who hasn’t? I’ve been confused and afraid. I’ve experienced great loss. I’ve blundered along. I’ve navigated breast cancer since the late 1990s, so in a way, I’m always waiting for the other shoe to drop. And my own daughters have borne witness to that, and through all the loss, learned to appreciate the grace of healing and hope. All of it has given me – and, more importantly, my girls – the capacity to love the one wild and precious life we have, to paraphrase the wonderful Mary Oliver poem. This is it, my life, mine, in all its complicated glory! Readers have commented on the dynamic of dark and light in The Next, and how it felt so real to them. What more can a writer ask for?

TL: I love dear Tom. He’s a faithful, loyal boy, and of course, he can “see” Joanna. What inspired you to include him in the story?

SG: I have a fantastic standard poodle named Enzo. I was getting up at 4 a.m. and writing this novel, my debut at age 60, by the way, since I have a day job. He was usually snoring at my feet in the pre-dawn hours. Now and then he’d rise up and nudge my arm with his big, brown muzzle, as if to say, Come on! Take a break! So, in a way, Enzo forced his way into the book. The loyalty and devotion of dogs has sustained me for my whole life and I wanted to honor that. The more Enzo made his presence felt, and he can be pretty insistent, the more it made sense to include him in the narrative – he became the embodiment of the devotion and loyalty and love Joanna did not get from Ned. It took her a while to recognize that it was something she’d had all along, from her daughters and her faithful.

By the way … Tom was my father’s name. I wanted to honor him, too. He was a great husband to my mother and father to me.

TL: Ned’s relationship with Trudi certainly highlights the intimate yet superficial culture surrounding social media. Social media added another dimension to this story in that Jo was able to “cyber-stalk” Ned after his betrayal, and remain obsessively focused on him right up to time of her own death. Can you talk a little about how this very recent phenomenon helped shape the story?

SG: As a narrative “device” – pun intended – social media offered a few angles for me. I am fascinated by the obsessive way we interact with our cellphones, and Jo is no exception. She is sick and she is weak, but she can muster up the energy to reach for the phone and tap into it to fuel her rage against Ned. She’s as addicted to that easy drip drip drip of imagery and information as she is to morphine in her final hours. Next, I love the idea of never really dying once you’ve got a cyber footprint. Your past interests, Likes, Friends, searches, selfies, dating, banking – it all lives on after you’re gone. Talk about taking the concept of “the ghost in the machine” to the next level. And yes, I’m as repulsed and yet drawn to the quick hits of consumer+celebrity culture as everyone else. I have to actively shut it down to shut it out.

TL: Let’s talk a little more about Ned. While I never got to the point of forgiving him for his actions, I certainly came to understand him, and even feel empathy towards him. Was this what you hoped the reader would feel toward him?

SG: Ned is at the top of the list of controversial characters. Reader reactions are passionate, that’s for  sure! I don’t want to overstate it, but it’s almost been a generational divide. Younger women in particular have been outraged by Ned. They’ve taken Joanna to task for starting up with him in the first place, and then sticking with him. They are more fierce and demanding than I’ve ever been! We drag a lot of baggage into romantic relationships, and the less fierce among us set it down and ignore it. Maybe we even reframe our ideals and compromise our integrity to accommodate love, to stay lovable. And yet, those bags are still sitting over there, waiting to be unpacked. Ned was very much in love with Joanna, and she with him. I certainly did not want to portray Ned as a straight-up bad guy. His intentions were good, but intentions are no substitute for actions. The road to hell, and all that.

TL: I’m always interested in an author’s process. How long did this story take to write, from the first draft to the final edits? And what is your revision process like?

SG: The Next took me two and a half years from start to finish. I write in a software program called Scrivener, and it’s scary-easy to see how many drafts I wrote – seven. Seven! There were two points along the way when I was ready to give up, both after I’d already secured my literary agents. I was sure the book was done, I simply could not see any way to make it better and not once but twice my agents shook their heads, pushed it back to me and said, A little more. I am so grateful! I took some breaks and of course, saw they were right.

I actually love the revision process more than the early drafting. Early drafting is terrifying: What am I doing? This is nuts! Where am I going with this? It’s a daily – no, hourly – struggle. But once the whole thing is set down, once you understand the setting and the chronology, the conflicts and resolution, once you are intimate with the characters (and by way of them, yourself and your motivation and your process) you can go very quiet and very still and close your eyes and search inside yourself for where the story needs to be better, stronger, tighter, truer. That’s exhilirating, searching for the truth in the words. I love that. I live for it now.

TL: Are you working on something new? Would you be willing to share a little?

SG: One of the joys of 2017 has been writing in a genre I haven’t tried before – the personal essay. I’ve published three this year and have a fourth coming in early 2018. That has been a great experience. It turns out I have something to say about aging and love and mothering and being a late bloomer, and my words have resonated with readers.

I’m deep into the pain and humiliation of writing my second novel. It’s untitled at the moment but in my head I call it “The Humbler,” because, well, I am at its mercy. I thought it would be easier, and in a way it is, I understand my own process. At least I think I do. But I’m trying to raise the bar for myself and my readers, with a wider scope, a bigger story. It’s about a woman with a complicated past – her childhood was stolen and exploited by her artist mother – and how, on the cusp of age 60, she has a decision to make: exploit the past herself and profit from it, or shut the door on it once and for all. This woman has to figure out how to turn the scars of her childhood into skin thick enough so that she can finally take control of her life, with a ticking clock. There’s another crazy dead mother, although this one is a ghost only in her daughter’s mind! The backdrop is rock and roll and photography, two subjects that – as a quintessential boomer – have exerted a tremendous cultural influence on me. It’s fascinating to take a look at how those influences – and we – have aged and adapted (or not!) over the years. Iconic rockers are closing in on 80, and photography is certainly not just for artists anymore!

TL: I definitely look forward to reading that! Thank you so much, Stephanie. 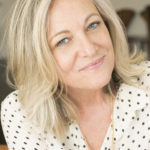 Stephanie Gangi is a poet, essayist, and novelist living and working in New York City. Her work has appeared on LiteraryHub, Bust, Catapult, and TueNight. Her award-winning poem, Four, was anthologized in the Hippocratic Prize Anthology, 2014.