The Little French Bridal Shop by Jennifer Dupee is a soul-felt, believable, and insightful story that also manages to be charming, playful, and entertaining. What a coup by this debut author we should all keep on our radar hereinafter!

Larisa Pearl’s mother suffers from dementia, but it is Larisa who is acting crazy. Shortly after returning to her hometown to tend to her deceased aunt’s historic home Elmhurst, Larisa pops into a bridal shop. When she pops back out, she’s bought a dress and laid the foundation for a whopper of a lie – Larisa Pearl is getting married! She’s not getting married and, in fact, has just broken up with her boyfriend. Even though she’s home, she’s lost and lies offer more comfort than the truth. We are so excited to chat with Jennifer today!

Amy Wilhelm: Your protagonist Larisa Pearl discovers that telling lies makes her feel free when the weight of her mother’s illness is suffocating. What is it about not being ourselves, even in some small way, that allows this sense of freedom?

Jennifer Dupee: Larisa has always thought of her mother as one of the beacons in her life, as one of the coordinates by which she defines herself. But if her mother ceases to exist, then who is she, Larisa wonders. At the beginning of the book, she recognizes that she has diverged from the person she thought she was in part because of the impact of her mother’s illness. She’s actually quite ashamed of the person she’s become, of how she’s been acting lately. She almost can’t stand to look at herself in the mirror. Buying the dress allows her to play a part for a little while and avoid herself.

And she can free herself from the weight of her mother’s illness. It’s a release valve of sorts.

AW: When Larisa pretends she’s getting married, though she isn’t, it reminded me of people who go to funerals or therapy groups to feel a sense of belonging even when they don’t actually belong there. I don’t think Larisa is looking for this kind of attention. But when she gets it, it makes it easier for her to play along. Does something as familiar as planning a wedding make her feel like she fits in more?

JD: I agree that Larisa is not trying to fit into a particular group, but I do think she’s trying to regain her sense of self. On the first page of the book, she flippantly announces “I’m never getting married.” Yet once she enters the shop and begins trying on dresses, she’s drawn into the excitement of it and she lets herself get caught up in the moment. And while getting caught up in it, she escapes for a while from some hard truths she doesn’t want to face.

I think all of us at times feel the desire to pretend to be someone else for a little while, to play another part.

AW: Elmhurst, Larisa’s great aunt’s historical home, is a character in and of itself. I know you love historical homes. How did you have fun playing with this theme? 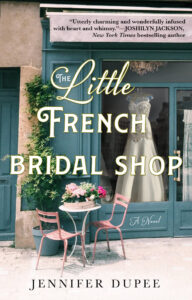 JD: I really loved writing about the house and I absolutely think of Elmhurst as a character in the book. I loved the idea that the house has seen Larisa and her family through many moments in their lives. Their memories live within its walls. I also really enjoyed the idea that different characters have different claims on the house. Aunt Ursula is the former (longtime) owner. Though she’s no longer alive during the action of the book, she is omnipresent because of the house and all the memories of her in it. Larisa and her father have inherited the house, but neither of them is committed to living there at first. Jack is the longtime caretaker of the house and has spent years on upkeep and maintenance, so in some ways, his claims are greater than those of the others. Elmhurst means something different to all of them.

AW: How did writing this novel help you work through the passing of your mother? SPOILER ALERT: After some searching, Larisa finds the power of unconditional love. Were you able to find that for yourself?

JD: I started this book 15 years after my mother died, so I had done a lot of grieving and processing. But when you lose someone so close to you, it leaves a hole. That hole can never be filled again because it can only really be filled by the person you lost. And in a way, you never want the hole to be filled because that hole represents that person that you loved dearly and you still grieve. There are still times when the phone rings and I think for a split second that it might be my mother. And of course, I’m saddened that I haven’t been able to share many of my life milestones (including the publishing of my debut novel!) with my mother. That said, life goes on, doesn’t it? By the end of the book, Larisa learns and accepts that even if she avoids her mother’s failing health, that doesn’t prevent her mother’s health from continuing to fail. And by being vulnerable and allowing herself to feel some hard emotions, she finds the way forward. And as for unconditional love – yes! I really have discovered that in my own life. I am very happily married with a young daughter and three amazing stepchildren. My life is very full and I feel very blessed.

AW: You went to Brown University and majored in Creative Writing. How helpful was your education in writing The Little French Bridal Shop? What did you have to learn for yourself?

JD: Well, it’s been some time since I was in college, but I loved my time in creative writing workshops there and I felt lucky to have so much unencumbered time to really focus on my writing. Without kids and work and other commitments, it’s a lot easier to give yourself over to the muse. I daydreamed a lot, I spent hours crafting paragraphs, I let myself experiment. I’ve always been a very descriptive writer, but I was a lot more raw and emotional when I was younger. As I got older, I really had to learn for myself how to analyze and rein in my writing and develop the narrative in a way that would resonate with readers.