I’m so pleased to welcome the incredibly talented Vincent Scott to BCB today!

Tabitha Lord: I’m sure you’re tired of answering this question, but where did you get the idea for this story?

Vincent Scott: Authors don’t want to admit it, but the real reason this is a difficult question is that we all have terrible 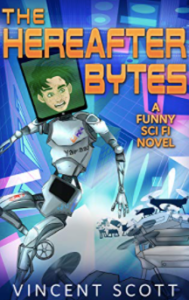 memories. Let me dust off some neurons and see what I can remember. I’ve always liked comedic genre fiction. One of the key benefits of genre fiction is that you can take hot button topics and shift them into a different world. This reduces the extent to which the audience brings their preconceived notions into the story. One of the key benefits of comedy is it can diffuse the tension that sometimes comes with having your worldview challenged. You put them together and you have a potent mix for getting people to reevaluate what they believe.

From that starting point, I knew I wanted to talk about asexuality, being ace myself, I knew I wanted to talk about power and systemic vulnerability, and I knew I wanted it to be fun. I know that doesn’t really answer the question, but to be honest with you, the specifics of the story just fell together bit by bit in the planning phase and then while writing. I probably got the idea for some key part of Romeo’s character while doing something embarrassingly innocuous like cleaning out the lint trap for the dryer.

TL: One of the reasons I loved Altered Carbon was it dealt with the interesting, troubling question of what happens to humanity if you take mortality off the table. It’s a rich theme to explore, and you tapped into it with The Hereafter Bytes. While your story is filled with plenty of laugh-out-loud humor, there are some serious themes threaded throughout. Can you talk about those themes you wanted to explore through your storytelling?

VS: As I mentioned, power and systemic vulnerability are fascinating social dynamics to me. They are something incredibly apparent to people on the disenfranchised side of things, and almost invisible to the enfranchised. Romeo is a character who for the most part in his biological life was enfranchised. He becomes a digital ghost, and the change in his circumstances—that his new life now has less value to the society around him—is not immediately apparent. Injustice essentially sneaks up on him, which I thought was thematically fascinating, and bountiful opportunity for comedy.

TL: We science fiction writers spend a lot of time thinking up future technology, or imagining how current technology will evolve. Can you share some of the technology featured in your story, and how it helped drive the plot?

VS: I think the essential element to writing sci-fi technology is to remember that all technology does is give people new outlets for the same behavior. Whether hard sci-fi or soft sci-fi, the key to making a technology feel organic in your world-building is not the tech, it’s how people would interact with the tech. So I thought about what the street art of the future might look like. Augmented reality being a big part of this world, it seemed like those two would interact. That’s how I came up with the idea for Grafinity, an app that allows you to create street art for a given wall and then lets people choose which piece they want on the walls around them.

While writing The Hereafter Bytes as I came to a point where technology might appear, I thought, ‘this is what the character needs in this moment.’ Then I thought about how I would get that in our world now. After that I would extrapolate future technology in the most ridiculous direction that seemed at least slightly plausible. So really the characters drove the technology which allowed them to continue with the plot.

TL: There’s a scene where an assassin is chasing Romeo, and they are having a rather humorous argument about the whole situation. She tells him she’ll have no remorse when she kills him because she doesn’t believe he has a soul. He counters by telling her he doesn’t believe in souls. This brief exchange really gets to the heart of the definition of life, or the question of when artificial intelligence should gain a protected status similar to biological life. In your opinion, where is that line?

VS: Okay, diving into the deep philosophical questions, I see. Well, here we go. Where does artificial life cross the line into something that should be protected? In general, I think our society takes a very cavalier approach to changing things, particularly destroying things. Not to say change is bad, but neither is it inherently good. Should life be protected, of course, but we’re also discovering that much more than just life needs to be preserved. Some examples would be the molecular composition of our atmosphere, the PH levels of our oceans, and the nutrient balance in our soil. We cluttered space above us to such a degree that an orbital disaster could create a debris field that would make future endeavors in space incredibly difficult. So taking a big step back, I think we as a society need to build into our culture a greater reverence for the value of things as they are. When we decide to make a change it should be weighed against that value with more care. Narrowing in on life specifically, when you apply this principle to artificial intelligence, I think the answer to when should something be protected becomes a bit clearer. If it poses no meaningful threat, and we’re not sure if it should be harmed, then it probably shouldn’t be harmed.

TL: What are you currently reading or watching that’s captured your interest, and why?

VS: The City We Became by NK Jemison is fantastic. It’s a trippy and thoughtful exploration of the intersection between identity and the spaces we inhabit. The Outer Worlds is a video game that has asexual representation and a great moral philosophy driven story. Plus they’re both fun. Did I mention that they’re fun?

TL: Your supporting cast, including the villains, were awesome! Do you have a favorite secondary character?

VS: Thank you so much. I really had a great time writing all of them. I think Izy will always have a soft spot in my heart. Writing her dialogue was always really fun. We see dry sarcasm tied to apathy with a lot of characters. I like that she’s dry and sarcastic and cares so much.

TL: Are you working on your next project? If yes, can we have a spoiler-free preview?

VS: I am working on my next project. It’s early days. I’m figuring out core elements still. It will be comedic sci-fi again, and it will explore humanities tendency to look for deus ex machina type solutions whenever we’re faced with a problem.

Vincent Scott tried writing his first novel at age eight and his first screenplay at age eleven. Fortunately for the world, all evidence of these works has been lost to time. After traveling the world, he can attest that people are very nice, when it’s convenient, and mostly do their best the rest of the time. He got a notoriously lucrative history degree in college. After knocking back dozens of six figure job offers, he settled on a safe career path as a novelist. If this whole writing thing doesn’t work out, he plans on joining a boyband and becoming the breakout solo act. Plan C is astronaut.