I had the pleasure of reading and reviewing Annabelle McCormack’s debut historical fiction novel, Windswept, last year. You can check that post out HERE. So, when I heard the sequel was in the works, I couldn’t wait for it! Today, Annabelle talks about the challenges of writing a ‘sophomore’ novel, and how she finally brought this new book to life. Welcome back to BCB, Annabelle!

Long before I had published a novel, I heard people talk about the dreaded “second book” or how difficult it was to write a 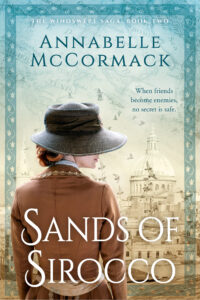 sophomore novel. Having never written anything other than for the sheer joy of it, this didn’t quite make sense to me because why would writing a sequel be any different than a first book when you love writing?

Then I published my debut novel, Windswept, a WWI historical women’s fiction. The experience of publishing it was thrilling and I immediately set to work on the sequel, Sands of Sirocco. I’d actually already written a full draft of the sequel and felt like I was in a good place to be ahead of the game—until I opened up that draft to edit. The sequel I had planned no longer seemed as good as I had imagined it was. What’s more, while it was fun, I had to face a heavy dose of reality: I was no longer writing for myself. I had readers and they had expectations and questions. Ignoring their expectations to just give them another fun adventure probably wouldn’t go over so well.

As I dug into my edits, I came to the difficult conclusion that the adventure I’d written was too much for one book. I knew I needed to divide my planned sequel into two books, but that meant basically fleshing out an entirely new plot to that sequel, to get my characters where I wanted them for the start of book three. Guess what happened right after I made that decision? Mind-numbing writer’s block.

I tried outlining. I tried all my favorite tricks to get my creative juices flowing: going on nature walks, long drives, listening to music, scribbling in my yellow legal pads. But no matter what I did, I couldn’t get a single coherent thought about plot together. My sequel felt dead on arrival, with no hope of resuscitation, except for the fact that I had readers who were expecting it. With each message of, “I loved Windswept—can’t wait for the next book!” I would groan and think, “Except for the fact that the next book is a flaming pile of . . . ” well, you know.

While all this internal writing stress was happening, my personal life took a hit: my mother was diagnosed with advanced cancer and things looked grim. We moved her in to my house to help with her care, which felt all-consuming. As my plans and ideas started to drown, writing the sequel felt more and more out of reach for me. So I closed my laptop, put my pen to the side, and simply tried to stay afloat in the deluge.

You’ve probably heard the expression that writers write, but why we write differs for each individual writer. In my case, writing has long been not only my favorite hobby and form of escape, it’s also a major way I use to process. Some of my friends have called it my “self-therapy.” I think that’s true. As a result, giving up writing during the most stressful period of my life really left me feeling adrift.

So, one morning, in the midst of all the craziness, I got up around four in the morning and started to write. I didn’t work on my planned sequel, I wrote something else instead. Something just for me, a contemporary romance novel that I’d written a few chapters of a few years earlier. I didn’t plan, didn’t outline, didn’t do any of the things I’d been trying to do with Sands of Sirocco. What I did do: show up every morning a couple hours before everyone else woke up and write my heart out.

Within three weeks, I had written a full novel. Writing that novel produced a character whose story needed to be told, so I immediately started writing another book, which again, I finished in three weeks. And with each word I wrote, I felt better, more calm, less stressed. The more I poured myself into writing for the sheer joy of it, the more writing became my life preserver in the storm.

Sands of Sirocco followed pretty quickly after that. It was as though writing for myself had turned the light bulb on again. And though I had my work cut out for me to meet my deadlines, I’m happy to say that Sands of Sirocco not only published in September 2022, but that some of my readers have said they loved it even more than the first book. Considering what I went through to create it, comments like that bring tears of happiness to my eyes.

. . . and those two other books I wrote to get me there? They turned into a series of interconnected stand-alones, All This Time and I’ll Carry You, both which are out Fall 2022 also. They helped save me when I needed writing the most, so I hope they can be special to someone else, too. 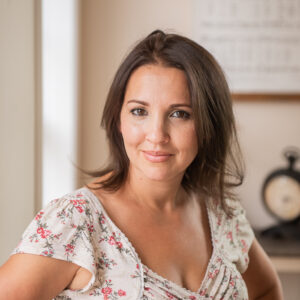 Annabelle McCormack writes historical women’s fiction with epic settings, adventure, and romance. Her debut book Windswept, a novel about a British WWI nurse in the Middle East caught in a dangerous web of intrigue and romance, was published September 2021. Annabelle was born in San Jose, Costa Rica to a Costa Rican mother and American father. She moved to the US at the age of 4, but remains fully bilingual in English and Spanish. She studied at the Johns Hopkins University, where she obtained a Master of Arts in Fiction in 2010. Afterward, she dedicated herself to her photography business, while continuing to work on her writing as a long-term goal. In 2018, she received the award for Best Novel at the 2018 Red Sneaker’s Writer Conference (now Writer-Con). She lives in Maryland with her husband and five children.