Natalie Greene does not have it all together. Her soon-to-be-ex-husband is creating a new life with a new woman. Her teenage daughter is, well, a teenager. And, her step-sister Isabel is a happiness guru who is trying to renovate Natalie’s distressed soul while wearing designer heels. But, at least, there’s a reason Natalie is falling apart. Her resurfaced guilt over causing her mother’s death is plaguing her. It was her fault, wasn’t it?

I really loved this book! Natalie is not your average sleuth, and her PTSD certainly complicates her perspective. The Happiness Thief is a unique take on a thriller that is both refreshing and true to the genre! PS – we think it would make a great book club read! It’s great to welcome Nicole to chat with us!

Amy Wilhelm: An important premise of The Happiness Thief is that your protagonist Natalie Greene can’t remember the details of the car accident she was involved in as a child that resulted in her mother’s death. She believes she somehow caused the accident. Doctors say there is no medical reason why Natalie can’t remember. Can you explain how this lack of memory occurs in real-life situations? How did your research support this premise?

Nicole Bokat: I did a lot of research on both post-concussive syndrome and PTSD, two conditions that can cause confusion and memory loss. A sudden tragedy can result in long-term issues with memory, especially around the traumatic event. It’s a form of self-protection to help the victim cope. While Natalie suffered temporary brain injury as a teenager, her body healed. Yet, she’s convinced herself that she has more serious, lasting damage. I decided that Natalie can’t remember the car accident as a defense mechanism that ends up not serving her well.

She has trouble reconstructing what happened and, as a result, distorts the part she played in the tragedy.

AW: Natalie’s lack of memory makes it hard for her to let go of her past and move on. In fact, she finds it nearly impossible. Yet, she tries anyway. Is it the trying that ends up mattering more than “leaving the past in the past” as her husband wanted her to do?

NB: For Natalie, not being able to access her memories of what happened in the car accident that killed her mother is almost as traumatic as the death itself. She has confusing flashbacks and wonders if she’s responsible for the accident. She was reading in the passenger’s seat, using a flashlight, which she recalls shining in her mother’s eyes. She keeps hearing her mom shouting that the light is blinding her. Natalie is desperate to try to heal. What Marc, her husband, asks of her is just not possible. She can’t put it in the past any more than a rape victim can will away her attack.

It is trauma that needs to be worked through if there is any hope of being able to live with it and its consequences.

AW: Isabel, Natalie’s step-sister, is a happiness guru who encourages Natalie to find inner peace by focusing on positive things and (again) letting go of the past. The way you present the positive psychology movement in the book is ambivalent. What is your personal viewpoi

nt, and why did you include it in your novel?

NB: The positive psychology movement and the wellness industry have intrigued me for a long time. Americans are obsessed
with happiness, obtaining it, and putting a positive spin on life. I’m of the belief that, while individual temperament and life events play a big part in determining one’s satisfaction and self-confidence, outside forces have a larger role than the self-help gurus often admit. I started reading the yearly World Happiness Report, which confirms that social support, safety nets, healthcare, and trust in government contribute to a person’s sense of wellbeing. So, while practices like yoga, meditation, journaling, exercising, and eating right certainly are useful, there are a lot of factors that aren’t directly in one’s control. I believe that it’s necessary to build up one’s resilience in order to face the inevitable obstacles and losses (like the Covid pandemic)!

But I also think some self-help is just “toxic positivity.”

AW: What is most challenging about writing a thriller? What is the most fun?

NB: The biggest challenge was attempting to write such a plotted novel. In the past, I’d consider a scene I’d written melodramatic and my writing group or a freelance editor, or an agent would disagree and tell me to “up the stakes,” to create more drama. One of my friends—a wonderful novelist—relayed this nugget from an editor at a publishing company:

“It’s always good if someone dies.”

My reaction to that advice was: I better up my game! I love language, character, metaphor, imagery. But what I needed to do was write an outline (it changed a few times) and build a story based on that framework. Ironically, what turned out to be the most fun part was: the plot. 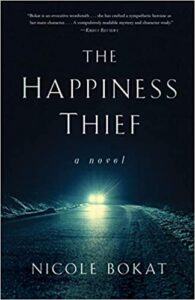 AW: Congratulations on achieving a bona fide surprise ending! That’s very tricky to do while also making the reader believe it. You did both! Yay! Without giving away any details, how did you pull off the feat?

AW: Wow, thank you so much! I wrote many drafts and enlisted the help of a couple of freelance editors. One writer/editor with whom I worked provided fantastic feedback and helped me with the plot and character development. For every plot change I considered, there was a cascading effect on each character, with respect to behavior. At times, it was painstaking because I wanted to be truthful to human emotions so the reader would believe the characters’ reactions.

Our interviewer Amy Wilhelm is a co-owner and Senior Writer at Book Club Babble. She’s also an author, and you can find her speculative thriller Brainstorm here.