Susan Henderson’s stunning new novel The Flicker of Old Dreams thoughtfully explores themes of redemption, forgiveness, resilience, and love. And, true to it’s title, asks whether it’s ever too late to pursue one’s dreams. Years ago a terrible accident shut down the mill in Petroleum, and as a result, the small midwestern town has been slowly dying out. The residents of Petroleum turned their desperate, misplaced anger on the victim’s brother, Robert Golden, who left town soon after the accident. Still an outcast, he returns home to care for his terminally ill mother and is befriended by the local mortician, Mary Crampton. Herself an outsider, Mary is drawn to Robert, and for the first time in her life she considers leaving her home in pursuit of her long-buried dreams. Susan Henderson captures the essence of life in rural America with stunning imagery, lyric prose, and depth of feeling. I’m so pleased to welcome Susan to BCB today!

Tabitha Lord: Mary Crampton is a mortician. It’s a job that most would shy away from, and yet through Mary’s experience of it, you’ve shown readers the compassion, satisfaction, and even the beauty she finds in her work. What made you decide that this would be the Crampton family business? How much research did you do to bring such authenticity to the scenes of Mary working with the dead?

Susan Henderson: I wanted to write about a dying town in rural America, and as I wondered how best to tell the story, I asked myself who in this town would be comfortable looking at and talking about death? The moment I brainstormed someone who works in a funeral home, I couldn’t let go of the idea. I started googling words and images. I fell into a number of rabbit holes – the body farm, post-mortem photography, embalming tools. And then I started to shape my research, first by ordering books and learning all I could about the business of running a funeral home and becoming an embalmer. And then I spoke with morticians, hospice workers, and anyone who spent time with the dead and dying. Sometimes I’d write a scene and then touch base with a professional, asking things like, “Okay, say a fellow arrives with a crushed chest. Would you pad it, and if so, with what?” The answer to that question is in the novel. 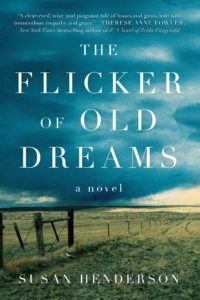 TL: The book’s title The Flicker of Old Dreams really captures a major theme of the story: Are we able to pull ourselves out of the life we’ve fallen into and reach for the one we truly desire? Did you know this idea would be the driving force behind the story, or did it evolve with the characters?

SH: This wasn’t my original intention at all, and neither was my mortician’s social anxiety. Sometimes you start writing a character and she takes on a life of her own.

My focus had been to dig down into the rage of the unemployed men in town and see what I could find. But Mary, my mortician, had her own reactions to that rage as it butted up against her work at the funeral home. I have to say that I loved seeing Mary, who began the novel feeling more at ease with the dead, gradually step into the living world, rediscovering her voice and the dreams she had let go.

TL: Robert has returned to Petroleum to care for his dying mother. He reflects, “When I was away, I could see how much of the town was in me. I like to eat in quiet. I like to take long walks and not know where I’m going. I’m forever searching the ground for fossils and plants. Forever searching the horizon for movement.” In some stories, the place itself has as much personality as any of the characters. The town of Petroleum, like its inhabitants, is struggling to stay alive amidst the changing times. Can you discuss your decision to set the novel here, and how important the place is to the people who live there?

SH: I became alarmed, and obsessed, with the growing gulf between one American and another, and in particular, the split between my current life in New York and my family roots in Montana. You watch the news and you get a sense that there are two Americas.

And so I went back to the town where my father grew up and where I used to visit as a child, to see if I could put my finger on what was happening—why we’d lost empathy for each other. I stayed for a month, walking through town and up to the rimrocks and eating at the diner. Every day I took pictures and listened to stories.

While I was there, I felt so isolated from the conveniences I’d come to depend on, and overwhelmed by how small and vulnerable I felt in all that open space. The terrain, wildlife, and weather are so much a part of the daily living there—the wind is practically a character in the book. And I definitely noticed that the locals were sturdy and self-sufficient in ways I couldn’t imagine for myself. I also noticed how many felt disconnected from the world they knew only from television.

TL: The death of Robert’s brother Eddie in a terrible accident is a catalyst that sends the town into decline. Many of the townspeople hold a misplaced anger at Robert, an anger that lasts for years. The story confronts the way tragedy shapes us, and how pain can transform into destructive bitterness. Can you talk a little about how you wove this theme throughout the book?

SH: All throughout writing this book, the political discourse, or lack of discourse, was in my ear. So the book took on that same tension. There were those whose identity felt tied to jobs and a lifestyle that were slipping away. But there were also those who had never felt that they could express their true nature or desires in a town with such strong traditions.

Both felt as if something or someone was blocking them from having the lives they dreamed of, from expressing themselves freely. Both were fighting for a sense of identity and fairness. So I’m playing with this throughout the book—the struggle against inevitable change, misplaced anger, missed opportunities for compassion, and glimpses of coming together.

TL: The story is filled with well-drawn minor characters who come to life on the pages. Do you have a favorite?

SH: My favorite character is Doris, Robert’s dying mother. I didn’t intend for her to take up so much room in the novel, but she insisted. There’s a scene of her dancing, attached to an oxygen tube, which was my favorite scene to write.

TL: Let’s talk a little about you! What does a typical day look like for you? What are your writing habits like? And what’s on your to-be-read shelf?

SH: Novels are hard because you have to stay excited about the material for years. So, while I might not produce a word count each day, I’m always trying to sustain and build my passion and curiosity about various topics in the novel.

For example, while I was working on The Flicker of Old Dreams, I spent a lot of time watching rodeos and calf-tagging, exploring small towns and sitting in their diners, listening. I read books about embalming and watched movies featuring snowstorms.

When I’m ready to actually put words down, the first thing I do is set myself a task. How can I get the character she trusts to show another side of himself? What will trigger a sense of longing in her? What might get these two characters to bump into each other? How can this broken necklace resurface in the story? Once I have my task, I go on a long walk, churning the question in my mind until a scene appears. Then I take out my phone, press the Audio Memos app, and talk the whole thing out. I write best when I’m moving.

I have a giant pin board in my office, and when I’m doing big edits, I’ll often pin pages to the board and then track themes and characters and objects from chapter to chapter. Sometimes I move things around to see if it gives the novel more power or surprise. If I’m doing the finishing work, which is all about the beauty and the meter of individual sentences, I’ll often start the day reading poetry or listening to rap, so music and word play is in my ear.

Right now, my to-read stack is filled with research books and documents about asylums. And for pleasure, I’m anxious to read Salt Houses by Hala Alyan and The Friend by Sigrid Nunez, as well as these books of poetry: Failure by Philip Schultz and No Matter the Wreckage by Sarah Kay.

TL: Do you have another project in the works? Could you give us a little sneak peek?

SH: I tend to fall for settings, and then I explore them until the story emerges. And I’m currently obsessed with an abandoned insane asylum in my town. It’s covered in graffiti and vines. The doors are bolted shut, but teenagers still find their way in. You see their flashlights moving through the building at night. I know my next novel will take place in there, but I’m still listening for what the story wants to be and looking through the broken windows and collapsed walls for the best place to enter it. 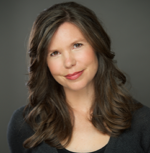 Susan Henderson is a five-time Pushcart Prize nominee and the recipient of an Academy of American Poets award. She is the author of the novels Up from the Blue (HarperCollins, 2010) and The Flicker of Old Dreams (HarperCollins, 2018).