It’s the year 2079 and the world is a scorched husk of a planet barely supporting the dwindling human race. When fourteen-year-old Abbey Lane, her best friend Max, and her brilliant brother Paul discover a way to travel back in time, they have to decide whether or not they should attempt to change the future. Their adventures take them to New York City 1971, where they meet a colorful array of characters including the legendary John Lennon. A post apocalyptic cautionary tale, The Edge of Elsewhere is, at its heart, a story of hope, courage, love, and friendship. It’s a beautifully written, captivating, thoroughly engaging debut novel. I’m so pleased to welcome author Sam Stea to Book Club Babble today!

Tabitha Lord: Often, we authors like to explore themes that are meaningful to us through our writing. Can you talk a little about the themes you were working with in The Edge of Elsewhere?

Sam Stea: What is precious to us? What lasts after we are gone? Have we the capacity to change our very nature to save ourselves from ourselves? These three questions are at the core to the theme of The Edge of Elsewhere. The natural world is precious. The lives of children yet unborn are precious. We in the 21st century need to look beyond ourselves and our immediate needs and gratifications to recognize climate change for what it is: the greatest and most imminent threat to human civilization and survival. The book is a story that answers these questions, through the lives of three young people of the future as they set out on a journey to find the truth about the past — as well as hope for the future. 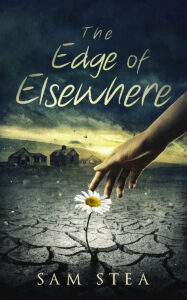 TL: This was quite an undertaking for a first novel in terms of plot complexity! How much pre-planning and outlining did you do? Were there places where the story took a turn and surprised you?

SS: The book was thought out listening to the Beatles and ’60s channels on the radio. As a physician, I spend much of my time in a car driving to and from dialysis clinics throughout central Pennsylvania. I had the story in my head even before writing it, although, the character of Lucy remained a wildcard, and the events surrounding John Lennon’s assassination changed a lot. I did write the first draft of the book on my iPhone.

TL: Without giving too much away, the time travelers in the story meet up with John Lennon. If you had the opportunity to travel back in time, is this who you’d want to meet? Who else would be on that list?

SS: I would meet Stanley Kubrick. I love his art. The Edge of Elsewhere’s ending is designed such that it is subject to the readers interpretation, much like Kubrick’s 2001, A Space Odyssey. I would also love to meet Emily Dickinson, who is the character Abbey’s spirit guide. I would ask her why she didn’t publish or try to publish most of her work (it was left stuffed in her desk). And it’s funny, but I feel I’ve known Einstein all my life.

TL: Can you tell us a little about your own background? Have you always wanted to write?

SS: I am a doctor who never thought of writing or being an author. I wanted to do something about climate change. I thought a good story, written well, might have resonance.

TL: What are your writing habits like, and how long did it take you to finish the first draft of the book?

SS: I am pressed for time to the extent that I worked on the book mostly at night, or early morning hours. It took me two years and a lot of rewrites!

TL: As speculative fiction writers, we often extrapolate a vision for the future based on best or worst-case scenarios in today’s world. Your focus was on climate change and a possible future based on a worst-case vision, yet your novel was filled with hope. Do you feel hopeful towards the future?

SS: I see young people take to the streets and I am hopeful because of that. We must remove ourselves from the shackles of the fossil fuel industry. It’s just a matter of time — but time is running out. I am more hopeful now than a year ago, that I see Donald Trump losing the election. We need to escalate climate change to a Cold War or WW2-level awareness in order to effect change for the future. Doctors can be instrumental in informing the voting public as to the health risks of climate change. I have hope that doctors will join the fight for awareness.

TL: We’re living through a global pandemic. Just a year ago, the world looked different in many ways. Can you share how Covid has impacted you personally, professionally, and creatively?

SS: I look at the battle to contain Covid as the dress rehearsal for climate change. Two forces are at work: anti-science and isolationism versus real science and global consensus building. I want to be part of the latter. I hope more physicians will join my cause in constructive and practical means. I have this new mission now, and it has given me joy and hope.

TL: Are you currently working on another project? If yes, can you give us a preview?

SS: Not yet, but perhaps another book, maybe nonfiction, about people who suffer from kidney disease. I’m trying to change my life so that I have more time to live, to get healthy, and take better care of my children.

TL: Thank you so much, Sam!

Sam Stea is a practicing physician, husband, and father living in North Central Pennsylvania. He writes in hope that others will join him in his effort to increase awareness that climate change is the greatest imminent health challenge humanity has yet to face. The Edge of Elsewhere is his first novel.