Ana Lal Din’s debut YA novel, Descent of the Drowned, is a haunting, powerful, and beautifully told epic fantasy. Roma is a sacred slave of the goddess, with no choice but to submit to the traditions of her caste. Yet, she has the strength to survive and the will to be free. Leviathan is the bastard son of the Firawn, an immortal tyrant who, in his ruthlessness, ordered his sensitive child trained to become a deadly soldier. Both Roma and Levi must confront their own demons and fight for a future of their choosing, but that path is full of danger, darkness, and struggles. Descent of the Drowned will definitely make my ‘best of’ list for 2021! I am thrilled to catch up with author Ana Lal Din today on Book Club Babble.

Reader, please be aware that this book deals with dark themes that may be triggering, including sexual assault, self-harm, and human trafficking.

Tabitha Lord: Like many fantasies, Descent of the Drowned plays with difficult themes. No matter if it’s dressed in magic, 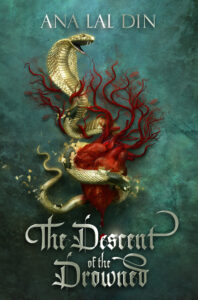 we’re able to see the darkest side of humanity on full display. I know that I write speculative fiction because I can explore difficult themes and set them just a little bit apart from the real world. Can you talk about your decision to write in the fantasy genre and discuss some of the challenging themes you presented in the story?

Ana Lal Din: Fantasy is such a complex genre. For a long time, I was intimidated by it because I didn’t feel capable enough to build a complete world with a magic system. My passion for the genre eventually overpowered my fear and so I decided to attempt it.

The most challenging themes for me were identity and humanity, which are incredibly integral aspects of being human. In the story, we see how characters are struggling to shed the identities that have been forced on them, or hold on to fragments of their humanity in a world where devastation is everywhere and survival compels people to suppress their conscience. They’re tested in their tolerance, their morals/values, and even their faith. They’re pushed to their limits, beyond, and cornered to reconsider what their own identity and humanity means to them and what they’re willing to sacrifice for it.

TL: This story was a bit darker than I anticipated, but I often find this to be the case with YA. I think intensity resonates with the young adult age group, and yet any YA book must also be appropriate for the age of the audience. How did you approach this balance in your writing?

ALD: I focused on not including graphic content for shock value, or otherwise depict graphic scenes unless they served a purpose in terms of showing a character’s brutal side, for instance, or illustrating the circumstances of the people. I attempted to keep most of the sexual violence “off-screen” and alluded to it instead through memory, emotion, and reaction. My purpose was to demonstrate the reality of our world without sugar-coating it, but also without indulging in it or presenting it in a gratuitous way. I wanted to spread awareness and provoke thought, not traumatize my readers, and so it was important to me that the content was carefully balanced.

While the themes are heavy, they’re universal to humans, and I wanted that to come through as well. There are young adults out there who have been through and are going through one or more of the issues in this book. I wanted the voices of those young adults to be equally represented, especially through Roma. The YA market is comprised of the next generation who will be responsible for building a better world than we have. Educating them on critical issues is vital.

TL: Can you tell us a little about your background and how it’s impacted your storytelling?

ALD: I’m a Danish-Pakistani Muslim with Indian heritage and I belong to the South Asian caste system. Added to that, I’m a woman with a mental illness. Multiculturalism is something I have worked into the story through the characters. For instance, Leviathan is biracial. Roma, on the other hand, is a woman from a lower caste. In my culture, people generally believe girls have less value than boys, and I illustrate this inherently toxic mentality in how the society in the story view and treat women. My multicultural identity, mental illness, and social status as a South Asian woman from a caste system are all elements that I engage with throughout the book.

TL: Were you always planning for your story to be a trilogy? If so, do you have the major plot and character arcs mapped out? Was there any place in the story where the characters surprised you and you departed from your original intention?

ALD: Actually, I planned on writing a duology back in 2007 when I wrote the prologue and the first chapter of the book. It wasn’t until 2015 when I fleshed out the story that I realized it was too complex to squeeze into two books and so I extended it to a trilogy. I do have the plot and characters mapped out, but Leviathan’s character is the one that really surprised me. He was originally the antagonist and became one of the main protagonists instead. This was such a significant departure from my initial vision for him that I had to rework most of his arc in order to write his chapters.

TL: Let’s talk more about the main characters – Leviathan and Roma. In this first book, Levi is on a path of redemption. His self-loathing is apparent, and he is torn between two worlds, but the pull toward morality calls him. Roma, meanwhile, is a victim of her birth circumstance and of the horrific caste system in their society. She is a survivor, but very much mired in her own trauma. The two have a complicated relationship. I really appreciate that you’ve kept it unresolved in this first book, as each of them are quite damaged, and any trust between them will need to be hard won to be believable. Can you talk a little about the journey these two find themselves on?

ALD: Leviathan and Roma must choose their own paths, but they’re very different paths that will continuously converge because they have a united destiny. I can’t say much about any romantic possibility between them, but their relationship changes a bit toward the end of the first book. Due to the complex nature of it, however, we don’t know where exactly it’s headed. What we do know is that they have some way to go before they can form any amount of solid trust.

Their separate journeys are equally complex. Leviathan has spent years subduing emotion, but the loss of his mother has unravelled him. Now he will have to face the repercussions of his sins if he wants to redeem himself, yet there’s a predominant part of him that doesn’t quite believe he can be redeemed and yields to how easy it is to be the monster. To walk the crooked path where he doesn’t have to deal with his own humanity. There’s a lot here that needs to be resolved (especially concerning his abusive relationship with his father) and he will be tested immensely in every thinkable way in the upcoming books.

Roma is indeed very mired in her trauma. She has to reclaim her true identity, but in the wake of what she has suffered (and lost)… Well, the question is whether she will choose to hold on to her humanity or relinquish it to have her revenge on those who wronged her. The most dangerous people are those who have nothing to lose… and Roma has nothing to lose but herself, which is a small price for her to pay in order to taste the satisfaction of reprisal. What we will have to see is whether she overcomes her trauma or heals from it, because those are two different things. The discovery of who she is and how it will affect her choices is something that is going to have an impact on everyone.

TL: World-building and magic are such an important part of the fantasy genre. Can you share a little about the magical system you created in Descent of the Drowned, and how that magic influences both the society and the main characters?

ALD: In this story world, magic is an actual substance like oil that can be drawn from the earth, tempered, and tied to a component (such as a chemical) in order to enhance or alter the component’s properties. When magic is tied to medicine, people can heal faster, for instance. The way that magic affects the society is that it keeps the land fertile which in turn provides people with food, water, and so on. This means that without magic in the earth, everyone will starve. It’s the most desired resource, and the reason why the country was colonized, so the political history of the story world is also tied to magic.

We get to see more of the magic system in the sequel, especially in relation to how it affects people beyond the fertility factor. As for the main characters, there’s a mysterious treasure that they must keep away from Leviathan’s father and that too will be explored more in the sequel. What is the nature of this magical treasure? How are Roma and Leviathan connected to it? Why is this treasure so important to the Firawn? Those are questions that will gradually be answered in the next two books.

TL: How long did it take to complete this novel? How far along are you with the second book in the series?

ALD: It took me about six months to write the book from start to finish. The second book is roughly written with the exception of a few chapters here and there, and I’m currently revising the completed chapters.

TL: Thank you so much for chatting today. I can’t wait to read the next book in the series! 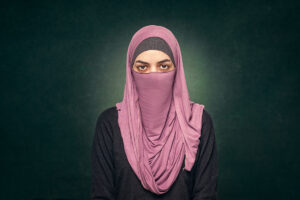 Ana Lal Din is an #ownvoices author who was born in a Danish southwestern city and raised in a small town outside Copenhagen. Passionate about culture, language, religion, and social justice issues, Ana’s story worlds are usually full of all four. What drives her as a writer is developing characters that are psychologically and emotionally complex, reflecting human nature at its darkest and brightest — and everything in between. Since Ana is a Danish-Pakistani Muslim with Indian heritage, she often explores the intricacies of a multicultural identity through her characters. The Descent of the Drowned is her debut novel. For more info, visit laldinana.net.