In A.M. Wilhelm’s debut thriller Brainstorm, we first learn about Melissa, a mother in search of the child she once dropped off at the Sunshine Children’s Home in D.C. eight years ago. When she discovers that there is no trace of her son Sidney – a mother’s worst fear – she loses heart and is frightened to find out what became of him. It is her boyfriend Nick who secretly continues the search.

Say all you want, but when it comes to thrillers, the stakes are never higher than when a child goes missing. Add fast-paced sub-plots and harrowing suspense and you have a great read.

The main protagonist in this conspiracy thriller is Nick Sperry, not a journalist or amateur investigator but an ex-CIA agent who finds himself unraveling a conspiracy (one that you will not see coming until the very end) that ultimately goes “all the way to the top.”

When orphans vanish, Nick Sperry takes on the case. His biggest clue is that the missing children have one thing in common: an IQ higher than Einstein’s. More importantly, Nick understands the immoral capabilities of the US government. Fueled by suspicion, Nick discovers Sidney isn’t the only lost orphan. There are others…

Book Club Babble is proud to interview the novel’s author Amy Wilhelm.  Amy, thank you so much for being here today. There are so many subgenres of thriller fiction, conspiracy thriller or paranoid thrillers, what would you say best describes Brainstorm?

A.M. Wilhelm: I think that speculative thriller captures Brainstorm’s essence the best. Although set up like a thriller, the storyline contains elements of near-future science fiction.

Maribel Garcia: Right now, I am really into thrillers on Netflix and when the characters are busy uncovering different conspiracies, trying to make sense of the truth, amid deceptions, rumors, and even government propaganda, I know that there is a whole team of writers and entertainment consultants, but I am always impressed when one single writer can craft this kind of fiction.  How do you do it? Where do you get your inspiration and can you tell us a little bit about your research process?

AMW: This story went through many many rewrites. Perhaps if a team had been involved, it would have been easier to keep the story tight and seamless. I created a lot of notes and primarily used the internet for my research. When it came to writing action scenes, I watched a lot of thriller-type movies and shows. I’d imagine how I could best describe what I was seeing on the screen.

MG: What was one of the most surprising things that you learned while writing this novel?

AMW: That good writing is mostly editing – at least, for me. Time and time again, I realized that I just said the same thing in two different ways. Or, I’d included a scene that didn’t move the plot forward. Sometimes beta readers asked me to expound a little more on a plot point. But generally, my readers can be trusted to fill in the blanks and draw their own conclusions. Isn’t that the fun of reading anyway?

MG: When did you first realize that you wanted to be a writer, and how long did it take you to write this book?

AMW: I love writing, but I don’t know if that makes me a writer. Stories knock at my door until I invite them in. I guess you could call me a hoster of stories.

Writing the rough draft of the story took just under a year. But honestly, that version was pretty atrocious. It was my first attempt at a full-length novel, and I really didn’t know how to go about it. I spent the past four years working and reworking that draft until I finally whittled it down to what I believe is its essence. 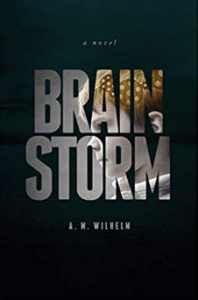 MG:  One of the main issues – and I will not give any spoilers and go into specifics – in the thriller revolves around the unethical human experimentation in the United States. Sadly, these thrillers do get our attention because these things have happened. Numerous experiments have been performed on human test subjects in the United States that have been considered unethical and have been performed illegally and without the knowledge or consent of test subjects. Your thriller takes it one step further and talks about children, was this hard to write about?

AMW: For me, writing fiction isn’t the same as writing non-fiction even if the topics are similar. Although the concept of nefarious government-sanctioned projects has parallels in our modern world, Brainstorm was born purely from my imagination. In that regard, making a story that felt real was actually fun. But if I had been writing for a newspaper article instead, the same scenes would have tormented my peace of mind. I think it might be similar to an actor enjoying playing a criminal or killer, which in no way reflects their opinion on real criminals or killers.

MG: The accomplishments of the brilliant Tabula Rasa think tank in Brainstorm seem to beg the question – do the ends justify the means? What’s your opinion?

AMW: Great question! I also watch a lot of Netflix, mostly shows set in the near-future. I also read a lot of science fiction in this genre. There always seems to be people doing terrible things in the name of the greater good or in the name of humanity’s survival. Perhaps my survival instinct is faulty, but I always find myself asking if a world in which we are cruel to one another just to stay alive is a world I would want to endure. What kind of legacy is that? These ideas are so so fun to play with as a writer. As a human, I could only work toward a world of kindness, inclusion, love, and compassion. Survival without those things would make life itself meaningless to me. But without a world at all, there is no hope for more. So, perhaps it does begin with simply staying alive. That’s why these questions are so interesting!