When ten-year-old Aggie Hayes accidentally lights a tragic fire with disastrous results, the terrified girl flees to the forest, where she uses her deep knowledge of the woods to hide. Meanwhile, angry at being dumped on her grandmother’s farm while her dad takes a job off the coast of Brazil, teen-age Celia eventually joins in the search for Aggie. A story of friendship and healing, love and faith, Cheryl Grey Bostrom also weaves a tale of danger and mystery into this beautiful literary gem. Sugar Birds, Bostrom’s debut fiction novel will surely make our ‘best of’ list this year! I’m so pleased to welcome Cheryl Gray Bostrom to Book Club Babble today!

Tabitha Lord: This story has such an incredibly vivid sense of place. Sometimes, the setting itself feels almost like a character. Did you call on your experience as a naturalist and photographer to bring this particular setting to life?

Cheryl Grey Bostrom: Absolutely. I tapped every bit of my experience outdoors to connect Aggie—and others in the book—to the breathing, communicating forest. After a lifetime of studying and exploring the Pacific Northwest, I know the story’s ecosystem intimately. I wanted to portray it—and the Love infused in its design—with that same nearness, and to employ nature to help illustrate my characters’ internal wildernesses.

TL: Can you give readers a brief description of the two main characters, Celia and Aggie? 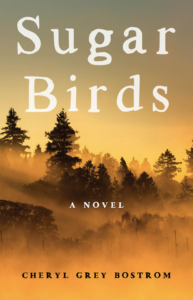 Aggie: Age 10. Tiny, wiry, winsome. An apt student of her arborist dad’s nature instruction. Fearless in trees; nourished by the woods—and the creatures who live there. Terrified of being caught and jailed after the tragic fire. Wild with grief and guilt; starved for forgiveness and hope. Resilient. Tender.

Celia: Effusive, intelligent, betrayed—and 16, with that age’s hallmark passion and confusion. Anger at her parents makes her reckless. Motivated to save raptors and find Aggie. Hungry for purpose—and belovedness. Beautiful, athletic, witty.

TL: You wrote Celia’s character in the first-person point of view and Aggie’s in third-person. From a storytelling perspective, why did you make this choice?

CGB: I tried writing them both in third, but Celia wasn’t having it. Though she’s a sparkler, with a huge personality, she clammed up in third person. Once I gave her the reigns, she came to life on the page, interactive and vocal. First POV suited her perfectly. But Aggie? Already a solitary child, she converses with no humans for a long time after she flees to the woods. Limited third POV allowed me access to her reasonings and emotions, but also made me an invisible observer of her lonely survival efforts.

TL: I really loved your supporting cast as well. Burnaby, Aggie’s brother, was particularly endearing. Do you have a favorite minor character? If so, why?

CGB: Oh, that character is Burnaby, for so many reasons. Brilliant, literal, obsessive-compulsive, and on the autism spectrum, he’s a composite of a few different people I love dearly. Like they do, he interprets life in a way that stretches me and tunes my imagination. And how he loves? Well, he humbles me. In both his lucidity and his misinterpretations, he reminds me that I have a lot to learn.

TL: Let’s talk a little bit about you and your career. You’ve written two non-fiction books, and your work has appeared in a variety of publications, but Sugar Birds is your first novel. What made you venture into fiction? What were the joys and challenges of the experience? Will you continue to write fiction?

CGB: I remember a Sunday at my grandparents’, when I was Aggie’s age. After dinner, I declared to my family that I would write a novel when I was grown. Fast forward to my sixtieth birthday. That day, after a lifetime of editing others’ non-fiction work, teaching English, writing and publishing essays and articles and poetry and columns and books, I finally acknowledged that it was time to refuse the fears and procrastination that kept me from long-form story-telling and learn all I could about it. No toes in the water stuff. I dove in.

The joys in that process arrived daily. I loved learning from a rich community of fellow writers and editors. Enjoyed sweet encouragement from a raft of friends. Caught my breath with awe when my characters started talking to me as I wrote them and when scenes I’d revised many times came together. I was exhilarated when themes I hadn’t planned began emerging; I saw elements from my life show up that I’d never originally intended to include, and they took on new meaning. Definitely true for me was what many others have said: we tell stories to make sense of others, ourselves . . . humankind.

Challenges? Ha! Learning to write fiction. Despite a master’s degree in English and years of experience with other writing forms, apart from short story work in a creative writing class in college, I knew little about the mechanics of writing fiction—or the magical ways imaginative artistry and intuition intersect with those skills. That synthesis was truly eye-opening and daunting. I observed and listened hard. Wrote crazy, terrible drafts. Tossed dozens and dozens of pages. Rewrote and edited like I never have before. A whole new level of intensity and difficulty.

But so much fun. I’ve already started a sequel with Celia and Burnaby front and center—in a story beginning twenty years after Sugar Birds ends.

TL: I’m thrilled to hear this! I look forward to it. Okay, last thing – tell us three interesting things about you we won’t find in your bio!

As children my sister and I climbed to ridiculous heights in old PNW Douglas fir trees, much like Aggie does. We didn’t travel through the canopy as nimbly as she does, but we sometimes passed from tree to tree.

I competed on my high school and college debate teams.

I’m an enneagram 7. Personality sure shapes my writing process. Your readers’ too? Would love to talk about how. They can find me at CherylBostrom.com.

TL: Ah, yes, the Enthusiast! Makes total sense. Cheryl, thank you so much and best of luck with your fiction career.

For most of her life, Pacific Northwest naturalist, photographer, and award-winning author Cheryl Grey Bostrom, MA, has lived in the rural and wild lands that infuse her writing. Her work has appeared in a variety of publications, including the American Scientific Affiliation’s God and Nature Magazine, for which she’s a regular photo essayist. A member of the Redbud Writers Guild, she has also authored two non-fiction books. This is her first novel. She currently resides near Lynden, WA.