Marc Graham appeals to the dreamer in us all as he knits together the lifelines of Iudila, a Visigothic prince, and Chakin, a Mayan princess. Though born an ocean apart, the tide of fate pulls them together in a story that counters deception and fear with tenderness and hope. It is our pleasure to chat with Marc about his most recent novel Son of the Sea, Daughter of the Sun.

Amy Wilhelm: When Iudila goes from privileged prince to what amounts to a slave, he adapts quickly and remarkably well. How does this ability lay the groundwork for his development as a leader? Are his trials essential to building his character both in a character arc sense and within the context of the story?

Marc Graham: One of the story elements that has been most controversial is Iudila’s victimization during this period of his journey. What I’ve tried to characterize is the disparity between a slave in a gilded cage and a relatively free person in less affluent surroundings.

The transition isn’t easy, and the effects of Iudila’s abuse affect him even years later, but he has an underlying resilience, a self-determination. The noble privilege into which he was born and which shaped his early character was stripped away during his imprisonment. His time among the rough and lowly sailors and his recognition of his true gifts–not simply his inheritance–help transform him into a more self-actualized person who recognizes his own agency in navigating the waves of events, rather than being swept away by them.

AMW: In Son of the Sea, Daughter of the Sun, a common religious language is shared by both Chakin’s and Iudila’s people. Was this connection inspired by something you found in your research?

MG: This is one of those fun religio-historical relics that was just too fun to pass up. The Book of Mormon—written (or interpreted, depending upon one’s viewpoint) by Joseph Smith, Jr., in the 1820s—presents the story of a family from ancient Judah who fled Jerusalem following a prophetic vision of the horrors soon to befall that city at the hands of the Babylonians. By following divine guidance and a mystical compass (some 1500 years before the magnetic compass came into use), the family finds its way to a new world, now the Americas, which lays the scenework for several centuries of historical, literary, and religious adventures.

While I don’t put much stock in the literal story of the Book of Mormon or of other Judeo-Christian literary works, they are rich resources for creativity, and great story-fodder. This was a great opportunity to play What-if? What if ancient Israelites reached the shores of Central America 2600 years ago? What if the Olmec and Maya cultures descended from these and the indigenous peoples, prefiguring the later European model of rulership by the foreign minority? What if the original language of the conquerors shared a root in one of the religious languages our hero learned as a schoolboy?

For the word nerds out there, I’ll give away my rendition of Cibola (as in the legendary Cities of Gold that fueled participation in the Spanish conquest of the Americas): Cibola —> Sibolat (my fictional, indigenous name for the lands of the Maya) <— Sibbolet/Shibboleth (Hebrew meaning, Plenty) <—> Bountiful (Mormon name for the New World).

AMW: Shamanism has its own role in the story. How is your experience with shamanism different and/or similar to how it is conveyed in your book?

MG: Shamanism is nothing more or less than connecting to realms of consciousness not accessible to our ordinary senses and bringing elements from those realms into everyday waking consciousness. One might call this magic, mysticism, creativity, demagoguery, or myriad other terms.

Two sides of this mystery are presented in the story. One seeks divine guidance and inspiration, that the ruler might choose the best path for the wellbeing of his people and his land. The other seeks the same insight for personal gain and aggrandizement.

Shamanism is a means of understanding how the world works, in relation to deity, nature, people, and all other aspects of our reality. As with any tool, this understanding can be used for good or ill, and the more people are aware of these processes, the more they can be alert to their usage for global benefit or personal gain.

AMW: The rituals you depict seem to be based on the art left to us from Pre-Columbian culture about which there has been 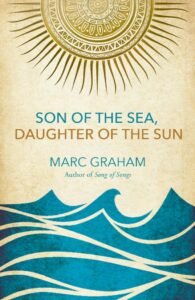 much interpretive speculation. How do you decide when to adhere to existing theories and when to veer from them?

MG: A casual glimpse at competing headlines or channel surfing among various news outlets will show how a single event can inspire multiple, divergent interpretations. What history ultimately records is generally the loudest and most persistent voice, whether or not that voice represents the facts of the event. Hence, “History is a set of lies agreed upon,” (Napoleon) and “History is written by the victors” (Churchill or Benjamin, depending on your victor of choice).

In all of my historical novels, I’ve tried to peer back through the lens of history. I’ve aimed to look through the projected image, past the distortions cast by the ideology and political ambitions of the victors, to arrive at an alternative interpretation of the recorded events.

Our understanding of Mesoamerican culture is in its infancy. Much of our understanding of Maya culture and archaeological remnants is interpolated from Spanish/Catholic accounts of the Aztec people (facing environmental calamity, foreign conquest, and cultural annihilation) as they went to extremes to preserve their world.

The vibrant society that produced the amazing artifacts of Shukpi (Xukpi, now the ruins of Copan, Honduras) came to an end nearly 700 years before the voyages of Columbus. In context, we are closer to Columbus and Cortes than they were to the Maya.

In the story, I’ve taken a literal interpretation of the extant ruins at Copan. These amazing pieces of art demonstrate fantastic costumes, gut-twisting mutilations, and touching sentimentality that scholars are still trying to fit into a cohesive framework. For me, they are snapshots into the lives of a vibrant, gorgeous microcosm of a people trying to make their way in the world, and to communicate with the powers of creation all around us.

AMW: Is open-mindedness an essential characteristic for a good leader as it is in Son of the Sea, Daughter of the Sun?

MG: I suppose it depends on the circumstances. In matters of extreme survival, exploring options and seeking consensus is maybe not the most effective means to the desired end. Where life is on the line, it’s generally best to defer to the brainstem (designed for personal survival and propagation of the species) rather than the prefrontal cortex (home of ideals and thoughtful decision-making).

One of the great challenges of our time is understanding the difference between these imperatives. Modern culture is geared toward placing every aspect of being within the framework of crisis. From reality television to politics to Royals-watching, the most trivial of moments is cast in must-see typeset.

In times of crisis, effective and decisive leadership by wise and experienced individuals can make the difference between survival and extinction. In all other cases, open-mindedness and consideration allow for true understanding of circumstances and the systems that create them. Without the latter, we cannot generate the wisdom and experience necessary, either to develop the leaders needed when a crisis emerges or to discern a true crisis from a blip in the news cycle.

AMW: As a writer of historical fiction, research is essential to your work. When do you put down the research and begin to tell your own story?

MG: I am a self-professed history and research nerd. As a kid, I would frequently go to our encyclopedias to look up a simple topic, then end up with fifty pounds of books on my bed as I followed a rabbit trail of research from one article to the next.

It’s critical to understand the period, place, and people of the story you want to tell. It’s essential to get the basics correct. For example, I had to edit out “She steeled her spine” when referring to a character whose culture hadn’t achieved ironworking.

That said, research can become a great excuse not to write.

It is a fine balance. Research can become a tool of Resistance, but it can also open the doors to amazing possibilities for scene and character development. For Son of the Sea, Daughter of the Sun, my research into the archaeology of Classical Copan provided physical expressions and glimpses into the lives and conditions of the story.

As with all storytelling, it’s important to keep an ear open to the Muse. She can lead you to the most serendipitous research discoveries, and she will tell you when you’re kicking your heels and wasting time, doing anything to actually begin producing the work. It can take time and experience to discern the difference, but always trust the Story.

AMW: Can anyone develop the skills to become a good storyteller or is talent required first?

MG: I’m not a big believer in innate talent. There may be inclination or predisposition, but true talent comes through action, through doing. Practice may be arduous or old-hat, but it must be passed through.

For example, I can’t remember not being able to read. But there had to have been a time when I learned shape-sound associations, the rules of phonetics, etc. Similarly, some people find an easy acquaintance with visual arts or dance or music, who seem to skip from introduction to mastery. Truth is, there is always some progression.

If the Muse has tapped you on the shoulder, if she’s whispered in your ear, if she’s given you a story to share, you have been called as a co-creator in the making of that story. This is a craft, and the craft has certain criteria and expectations, varying by age, genre, and other peculiarities.

It’s incumbent upon the storyteller to understand craft, to understand style and convention and the vagaries of the market. Depending on your goals (Pulitzer prize, bestseller status, earning a decent living, or simply having the story in print), there are differing degrees and expectations associated with them.

The storyteller’s job is to tell a story. This is a fundamental trait of humanity and that ability is hardwired into every one of us. Refinement of that ability to the written word may take time and practice, but if the Muse calls, she also provides the means.

Before Son of the Sea, Daughter of the Sun, Marc wrote Song of Songs: A Novel of the Queen of Sheba. His first 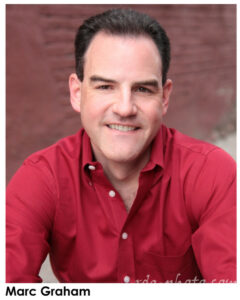 novel, Of Ashes and Dust won the Paul Gillette Memorial Writing Contest and National Writers Association Manuscript Contest. Graham is an actor, speaker, story coach, shamanic practitioner, and whiskey aficionado. When not on stage, in a pub, or bound to his computer, he can be found traipsing about the foothills and mountains with his wife and their Greater Swiss Mountain Dog. Learn more here.