Jennifer Kitses’s debut novel, Small Hours, is an emotionally charged, skillfully written domestic drama. Helen and Tom are the exhausted parents of two small children, dealing with a constant financial strain and their own high stress jobs. Two years after moving out of New York City to raise their children in a quiet mill town, their lives feel more complicated and taxing than ever. And Tom has a secret – one that threatens to destroy his family. Over a twenty-four hour period, all the decisions they’ve made and all the secrets they’ve kept are about to catch up to them. Fraught with tension, laced with humor, and incredibly relatable, Small Hours is a powder keg with a lit fuse. I’m so pleased to welcome author Jennifer Kitses to BCB today.

Tabitha Lord: Can you share where the idea for this story came from?

Jennifer Kitses: The ideas for Helen’s and Tom’s stories came to me separately, but they felt woven together from the very 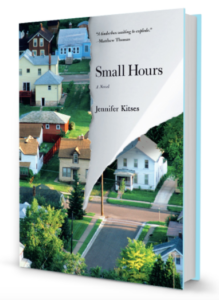 start. With Helen, I wanted to explore the way a minor but potentially explosive encounter can lead a person to lose control. So many times in the city, I’ve witnessed — and have sometimes become caught up in — situations that have triggered a feeling of sudden, intense anger, such as getting shoved on the subway or yelled at by a stranger. Sometimes these incidents are small, or at least seem that way, but these moments of unexpected nastiness have a way of getting under our skin. I wanted to see how Helen, who is coping with so many pressures and compartmentalizes her emotions, would face an intense situation like that. She was raised to believe in the importance of self-control, but the temptation to give into anger can be very strong.

With Tom, I was trying to answer a question: can someone do something terribly hurtful and wrong, yet still be a good person? What if a person compounds their mistake by lying about it? How would you get yourself out of a situation like that? Tom’s problem is very specific, and I don’t want to reveal any spoilers. But part of what makes his problem specific to him is his genuine love for his family: by trying not to hurt the people he cares about the most, he winds up in a situation where he might lose them.

TL: Tension has been building in the lives of both Tom and Helen for quite some time, but the story unfolds over a twenty-four-hour period. Can you talk about your decision to structure the novel this way?

JK: I wanted to capture the feeling of how much can happen in a single day, and also how an ordinary day can suddenly take a wrong turn, with life-changing consequences. At the time I started working on the novel, my twin daughters were three years old, and I was freelancing and trying to take care of them at the same time. It wasn’t unusual for both my husband and me to have work emergencies on the same day — the kind of emergency that can cost you a job — and meanwhile one child was sick and the other was about to catch it, and something crazy, and potentially dangerous, would happen in the playground. There were fun moments, of course, but there were so many times when we were just trying to tackle the latest emergency, hoping to somehow make it to the end of the day — knowing that the whole cycle would start again in just a few hours.

When you’re taking care of small children, days like that can happen all the time, but I think we all have days when we’re under tremendous pressures that are coming from many directions, and all we want is to take a few minutes to ourselves, but there’s no time for that. And it’s very easy to make a bad decision under these circumstances.

TL: While Helen has been keeping most of her inner feelings to herself and has become more withdrawn from Tom, it’s really Tom who holds a crushing secret. Yet despite his betrayal and lies, he is a sympathetic character. You could have chosen to make this a story of betrayal alone, from Helen’s point of view, but instead you chose this more complex dynamic, showing both their points of view. Can you discuss that choice and the reason behind it?

JK: I have a lot of empathy for both characters, with all their flaws and despite their mistakes and bad decisions. I guess I like to believe that all of us deserve empathy, even after making terrible choices. And because so much of Tom’s and Helen’s stories relates to how they perceive each other, I thought it was important to give the reader both points of view.

I also felt that Tom and Helen each had their own story to tell, in addition to the shared story of their family and marriage. They live in their own worlds; these worlds brush against each other, and during some hours of the day even overlap, but they are separate. This was an aspect of relationships that really struck me when my children were very small: you can share so much with your partner, but you’re still living in your own world.

TL: Helen’s deep-rooted anger seemed to stem from the stress of the twins, the financial issues the couple was experiencing, the change in her job, as well as other completely understandable and relatable issues. But I also believed that on some level Helen was angry at Tom – that perhaps intuitively she knew he’d been lying to her. As a writer myself, I’m aware that a reader’s interpretation can often be very different from what’s intended! So, I’m asking the author – is this the case?

JK: That is a very interesting question! I do think that some of Helen’s anger seems to be directed at Tom, and she fights against the urge to be suspicious of him — which is already too late, because the suspicion is there. She also blames Tom for not acknowledging the situation their family is facing: their slow slide down the economic ladder. She is fully aware of her family’s financial crisis, but Tom, who is distracted by his own problems and secrets, is happy to turn a blind eye and hope that things will get better if he works hard enough. Helen, who like Tom is already working as hard as she can, would love to come up with a way to keep her family afloat, yet no solution presents itself except for selling their house and moving again, which Tom — correctly — tells her they can’t afford to do. This also becomes a source of anger.

I always love hearing readers’ interpretations! I think it’s fascinating when someone’s take on a scene is different from what I had in mind.

TL: Tom’s work experience in the newsroom feels particularly authentic and I know you’ve worked in journalism. Can you talk about the places where your own life intersects with your fiction?

JK: Before Small Hours, I was working on a novel that didn’t intersect with my own life at all, and the experience couldn’t have been more difficult. So with this story, I decided to borrow what I could. I know what it’s like to be a parent of young children, and I was a newswire reporter for several years and have also worked at magazines. Tom’s newsroom scenes were probably the most fun for me to write! There were also plenty of smaller details that worked their way into the story. Like Tom, I grew up in a working-class neighborhood of Philadelphia, and thanks to my extended family, I’ve spent a lot of time in the small towns outside of Boston, where Helen grew up.

Helen’s work as a graphic designer was based on various jobs my husband has held. He was very patient with my questions and fact checked everything related to the marketing of muscle-building nutritional supplements, a subject closely tied to Helen’s work. It was very challenging to come up with product names that don’t actually exist.

TL: Are you working on another project? If yes, can you share a little?

JK: I’m hard at work on something new, but it’s in a very messy stage where major elements — characters, the entire plot — are changing all the time. I feel like I have another draft to go before I can wrangle it into shape and talk about it coherently. At the same time, I’m exploring a different idea for a psychological suspense novel. A different genre, but only slightly, and I believe those category divisions have been blurring for a long time, which is great.

Jennifer Kitses grew up in Philadelphia. She received an MLitt in creative writing from the University of St. Andrews in Scotland, and has worked for Bloomberg News, Condé Nast Portfolio, and Columbia Business School. Her fiction has appeared in Akashic Books’ online series, Mondays Are Murder. She lives with her family in New York.