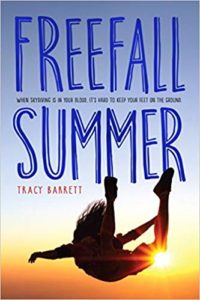 Tracy Barrett’s new novel, Freefall Summer, is about a girl named Clancy who spends her summer packing parachutes for jumpers at a drop zone. Despite her job—and the fact her father owns the place—Clancy has never parachuted. Her dad won’t let her. It’s how her mom died. Now that Clancy is on the verge of finishing high school, she’s ready to be out from under the thumb of her father. She might also be done with her overprotective boyfriend too…especially once an interesting college student takes an interest in jumping—and Clancy.

Mary Sullivan: Where did the inspiration for setting your novel at a jump zone come from? The details about sky diving were vivid and felt real.

Tracy Barrett: One year I spent a few months hanging out at a drop zone. I made seventeen jumps during that time. And when I needed help packing my parachute one day, a 6’7” guy with a pronounced southern accent (I’m from New York) offered to help me—long story short, we got married a year later! Since he was a long-time jumper, through him I stayed in touch with the skydiving community. We have a lot of skydiving friends, and while I’m not an active jumper anymore, I’ve been hearing stories and adventures for a long time. When I came to write Freefall Summer, I had many anecdotes to draw from!

Skydiving has been a major part of my life, and I’ve wanted to write a skydiving novel for a long time. But I couldn’t think of a story where it would be an integral part of the action. I’ve written several retellings of ancient Greek myths, and one day it occurred to me the myth of Icarus would be a great basis for a YA novel. It didn’t take me long to put those two ideas together to make Freefall Summer! It’s not a retelling of the story of Icarus, but if you’re familiar with the myth, you’ll see echoes of it.

I made an eighteenth jump, my first tandem jump, when I was writing Freefall Summer, since I had to see what had changed in the years since I’d jumped. Tandem jumps didn’t exist then—in those days, you had to climb out, hanging onto the wing strut, and then let go of it! But I knew that making one tandem jump wasn’t enough to bring me up to date with skydiving techniques, jargon, etc., so two friends who are expert jumpers read and critiqued Freefall Summer before I sent it to my agent.

MS: Clancy wants to get out from under her father’s thumb, yet she’s a bookworm who chooses to not break the rules. As her love interest, Denny, says: maybe she’s the overprotective one. Yet, Clancy didn’t see it that way. What were you looking to expose with Clancy’s internal conflict?

TB: Clancy had to grow up too fast and without the guidance she should have had. This wasn’t her father’s fault; he was heartbroken and shaken up at his wife’s death. But even though he loved Clancy and did his best (with the help of her mother’s friends), it wasn’t enough. His own issues got in the way. He overcompensates by being too protective.

Clancy is also protective of her father, since she saw him fall apart at her mother’s death. This was terrifying for a little girl, and she became careful about staying out of trouble and avoiding any risks, to keep him from going through anything like that again.

All of this puts Clancy into a kind of pressure cooker. She has to find a way to show her father and her boyfriend, Theo, and most importantly herself, that she isn’t fragile and can take care of herself.

MS: Clancy is also trying to figure out her love life. The end of high school is a major transition time. What do Theo and Denny represent to Clancy about her future?

TB: Theo is a nice guy and has a lot of good qualities, but he’s not the right guy for Clancy. He has the qualities of an ideal boyfriend—he’s affectionate, smart, athletic, self-assured, attentive, handsome—but now that he and Clancy have been together for a few months, she’s beginning to see that what Theo expects out of a relationship doesn’t line up well with what she wants. Theo sees Clancy in much the same way her father does, as someone in need of protection, and that adds to her desire to break free.

Denny, on the other hand, doesn’t know Clancy’s history, and he also thinks she’s a college student (she’s actually 16). When he meets her, she’s skillfully and matter-of-factly packing parachutes. All these things make him assume she’s competent and self-assured.

MS: How did you get your start as a writer? Can you share your journey with us?

TB: I always liked to write, but I was interested in many other things as well. Like Clancy, I wanted to be an archaeologist. In college, I majored in Classics and studied archaeology in Rome. I fell in love with Italy and ended up getting a Ph.D. in Medieval Italian literature and teaching Italian at Vanderbilt University. A few years ago, I was asked to write some articles about medieval women, and I became so enthralled with one of them, Anna Comnena, that for fun I wrote what I imagined would be the opening of her memoirs. Some writer friends read it and asked me what happened next, and I didn’t know! I had to write the next chapter to find out, and then the next, and the next. This project wound up being my first novel, Anna of Byzantium. I love doing research, so I’ve written a lot of nonfiction, historical fiction, and retellings of familiar tales, as well as fantasy, time-travel, a detective series, and more! I’ve written 23 books for middle-grade and young-adult readers, and almost half of them are nonfiction. 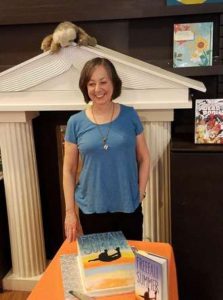 About Tracy: Tracy Barrett is the author of numerous books and magazine articles for young readers.

She holds a Bachelor’s Degree with honors in Classics-Archaeology from Brown University and an M.A. and Ph.D. in Medieval Italian Literature from the University of California, Berkeley. Her scholarly interests in the ancient and medieval worlds overlap in her fiction and nonfiction works.

A grant from the National Endowment for the Humanities to study medieval women writers led to the writing of her first novel, the award-winning Anna of Byzantium (Delacorte). Her most recent publications are a contemporary YA novel, Freefall Summer, which draws on her own skydiving adventures; a middle-grade fantasy entitled Marabel and the Book of Fate; The Song of Orpheus: The Greatest Greek Myths You Never Heard, a collection of little-known Greek myths; and the popular middle-grade series The Sherlock Files.

From 1999 to 2009 Tracy Barrett was the Regional Advisor for the Midsouth (Tennessee and Kentucky) with the Society of Children’s Book Writers and Illustrators. She is now SCBWI’s Regional Advisor Coordinator.

Freefall Summer can be purchased here or where you buy books.