Often science fiction and fantasy are linked together under the same banner, but are the two genres really the same? What are the essential components of each, and can they be combined? Today on BCB, guest author Colin Alexander gives his thoughts on writing in this broad, multi-faceted genre.

Science fiction or fantasy? Fish or fowl? Over the years, the two genres have become viewed as separate and distinct, each with readers who focus on one much more than the other. Is it possible for them to blend together, or for a story to be read as both? When I began writing Princess of Shadows: The Girl Who Would Be King, it felt like the story had a foot on either side of the divide. 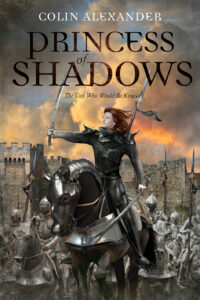 The difference between fantasy and science fiction is easy to see at the extremes. On one hand, we have what we call hard science fiction. These stories stick to the universe and laws of physics as we know them. Chemistry, biology, medicine, computers all have understandable extrapolations from the current day and the novels are frequently set on Earth or within the solar system. For purists, even interstellar travel is too far a reach since any method of reaching the stars, other than a generation-ship, involves some degree of “handwavium”.

At the other pole are the fantasies. They are generally set on another world, they may feature gods and goddesses, and often have dragons. Most importantly, they incorporate magic. The laws of physics do not apply or, at least, there are exceptions. After all, if I can chant certain words and turn you into a frog, what has happened to the law of conservation of matter and energy?

How can a story be a blend, or be both? Arthur C. Clarke once wrote, “Any sufficiently advanced technology is indistinguishable from magic.” Is a starship that can take us to Arcturus in five days for a vacation science fiction, because I can make it sound “science-y”, or is it fantasy? Is a magic wand creating an invisible wall that arrows cannot pierce fantasy or, if I describe it with a bunch of scientific jargon, is it science fiction?  Hmmm . . .

Princess of Shadows started with a single image in my mind: a girl drawing a sword. This led, of course, to a string of questions. Why was she drawing that sword? Who was she in the first place? What events led her to do so at that particular time and place? As each question led to another question, the story assembled itself and created facts. Swords were the weapons and came with armor, castles, and horses. In other words, I had a pre-technological society. This is a typical fantasy setting. What about magic? I couldn’t see it in this tale. Developing skills, both with the sword and in other areas, was too important for the princess. Magic could be a cop out. Yes, characters in fantasies need to learn their magic techniques, but then, the story depends on magic. What about dragons? I can manage my cat and take my daughter’s hound for a walk. I don’t feed dragons. No dragons. At the same time, I’ve written hard science fiction before, and I kept that way of viewing the world in my mind.

This princess does live in an unusual world. One that is clearly not Earth.It has a red sun fixed in the sky. The point in the sky varies depending on where in this world you stand—and in places it’s not in the sky at all, which is why those are called the Dark—but the sun doesn’t move. Measuring the passage of time in this society is interesting. This led me to building the world scientifically, from the plants that might grow to the weather, and creating a backstory for its people.

So, do we have science fiction or fantasy? Is it possible to read it both ways? If we ignore the underpinnings of the world, it can be a fantasy. If we want to read science fiction, the basis for the world and the backstory of how people came is there.  Key themes of this book—learning from your mistakes, always doing your best, and keeping your promises—don’t depend on the genre. And, yes, this is a tough world, and the princess does decide to get even. In the end, science fiction or fantasy can be reader’s choice.

Colin Alexander is a writer of science fiction and fantasy. Actually, Colin Alexander is the pseudonym for Alton Kremer, maybe his alter ego, or who he would have been if he hadn’t been a physician and biochemist and had a career as a medical researcher. He’s been reading science fiction since he was ten and has published seven novels so far. His most recent, Princess of Shadows: The Girl Who Would Be King was released in November 2021. He’s an active member of both the Science Fiction and Fantasy Writers of America, Mystery Writers of America, and the Maine Writers & Publishers Alliance. Away from writing fiction, his idea of relaxation is martial arts (tae kwon do and minna jiu jitsu). He lives in Maine with his wife. You can find Colin and his books at his website, www.afictionado.com, on Amazon at amazon.com/author/colinalexander, Goodreads at goodreads.com/colinalexander, or on Facebook @ColinAlexanderAuthor.