This interview was originally posted on May 31, 2016, three days before Muhammad Ali departed his physical being, entering the spiritual world of his belief.

It takes a special kind of dignity to stand in front of the world and allow them to see the humanity behind your mythic invincibility. This was the thought resounding in my mind as I watched Muhammad Ali hold the Olympic torch with trembling hands during the 1996 Summer Olympics in Atlanta. I’m sure it was a sentiment shared by many, his frailty and strength piercingly vivid. Revealing a beloved, yet imperfect man, enhancing our admiration for him.

In Running with the Champ

Tim Shanahan, the lifelong friend of Muhammad Ali, amplifies this vision of him in a metaphoric sense. Adding in many personal stories and private photographs, which serve to make the portrait of Ali more compelling and honest. This is a story that speaks from and to the heart.

When they meet for the first time in 1976, Shanahan, a medical device salesman who would like Ali to come speak at an event for children, is clearly overawed and their interactions start off on noticeably uneven footing. Mr. Shanahan, at first, seems to be willing to do anything to be in Mr. Ali’s life. Yet, as the relationship deepens it becomes obvious what a mutually special friendship they share.

Running with the Champ

made me laugh, cry, and wonder. It also sparked great late night conversations with my husband, accompanied by watching lots of Ali footage on YouTube! It’s with tremendous enthusiasm that I share BCB’s interview with Tim Shanahan.

Amy M. Hawes: Tim, thank you for visiting with Book Club Babble to talk about your recently released book, Running with the Champ

, which covers your decades-long friendship with Muhammad Ali. I can only imagine publishers would have been interested in your unique perspective on Ali long before you actually wrote the book. What was the pivotal factor in your decision to put pen to paper, or more accurately, fingertips to keyboard?

Tim Shanahan: I helped Hana Ali, Ali’s daughter with his third wife Veronica, with her book. She said that I should write my own book since I have such great stories about her dad. I asked two friends, George Foreman and Dick Enberg, and they both said that the world needed to hear about the depth of the Greatest’s character through the eyes of a good friend. That’s what made me decide to write the book.

AH: In the opening chapters of Running with the Champ

, you seem nervous to say or do anything that might cause Ali to decide not to spend time with you. The relationship, at first, seems lopsided. Can you remember when it started to feel different? When you felt like you were truly friends?

TS: When he asked Helga and me to come to his house to watch the final episode of Roots. He had asked Helga if she would cook another dinner for everyone. Then he made a fire and brought the kitchen TV into the living room and placed it in front of the fireplace. And, we watched Roots just like millions of other families around the country were doing. WOW! That is the day that I knew we were close friends, not just Ali and I, but, Helga, Veronica, Ali and me. I also often said that without the four of us, I doubt if there would have been the two of us–Ali and myself.

AH: There are many times you had to walk the line between being a supportive friend and not wanting Muhammad to get taken advantage of by those who were less kind-hearted than you are. And, it seems, on those occasions where you did voice some concern over his decisions he had a tendency to lash out at you. How difficult was it to maintain the balance between loving concern and respecting his decisions?

TS: I felt that our friendship wasn’t on firm ground when once I told Ali, “I know you and you would never want to do that.” He responded, “You think that you know me, but you don’t know me. Nobody knows me. You don’t know what I will do or say. I don’t even always know that. Do you think that you are God and know what I will say? You ain’t God.” Then the next day, despite my concern, it was as if nothing ever happened between us.

AH: I loved how you didn’t hide Ali’s desire to show-off–whether flaunting his relationships with famous people like Diana Ross or making sure you noticed the elevator in his house and complimented him on it. Then when you describe his acts of incredible generosity–sending money to any relative who asked for it or paying full price for cars and real estate because, “they’ve got to make a living, too,” his actions seem more real because you’ve shown us that he is complex. That he is human. Because Ali was (and is) such a close friend, how were you able to mitigate your love for him with your desire to tell an honest story?

AH: The close relationships between you, your wife Helga, Ali and his wife at the time, Veronica, reveal an entirely different side of Muhammad Ali, where he is a friend, a husband, and a father. Yet, the strength of his personality always seems to make him the perpetually dominant force in interpersonal relationships. Did the rest of you just accept that’s who he is? 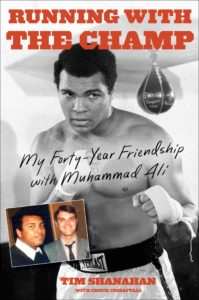 TS: Yes. Muhammad Ali is larger than life. He has the utmost sincerity and integrity. He is the most spiritual person, on another level than the average man. When we are in his presence, it is like being in the presence of the POPE. That is the best way I can describe it. Yes, Veronica, Helga and I knew that when we were with Ali we were in the presence of GREATNESS.

AH: There are many examples of Ali’s generosity and kindness in Running With the Champ. Is there one story that is your personal favorite?

TS: There was a Jewish old people’s home in the Bronx that was bankrupt and was about to close down and would put about 50 elderly Jewish people on the street. Ali saw the news report on CNN, contacted the home, and wrote out a check for $100,000 to keep the home open. He said, “We are all children of God–black, white, brown, Muslims, Jews and Christians. We all love the same God.”

AH: You discuss the night Helga met Muhammad for the first time and you asked her what she thought about him. She replied, “He’s so full of love.” It’s almost ironic that a man who made his living in the boxing arena and who was famous for the biting taunts he directed at his opponents, would be so “full of love.” It had me wondering if maybe that was the origin for the taunting. Meaning, he had to purposely rile up his opponent so he could rile up himself enough to go into a different, competitive, non-compassionate mode. Do you think there’s any truth to that?

TS: Yes. This is exactly why he promoted his fights the way he did. After Liston, he thought that he would have to keep up his promotion as the braggart, who was predicting rounds in which his opponents would fall. He did it to 1. Cause 50% of the people come to the fight to see him lose and 50% come to see him win. 2. He needed a challenge–something to motivate him to train hard because he hated training. He would insult his opponent to motivate himself.

AH: When you accompany Ali to Deer Lake, where his training facilities are, there are other friends there who don’t seem to be true friends at all–they often take advantage of Ali’s generosity and some may have been scamming him. I don’t think I came across an explanation in the book of why you think Muhammad allowed these kinds of characters to stay around him. Have you thought about this?

TS: All of these people served a purpose in Ali’s grand scheme of things. These are people who needed a job, needed some recognition, people who bathed in Ali’s limelight. They had one thing in common–they all loved Ali, whether they were good, bad or ugly. They all loved Ali! Muhammad knew this and took them into his fold to be part of all of his preparations for his fights. Ali knew that only he could make these people feel special by bringing them into in his camp. He said, “I never look down on people who look up to me.” And, besides that, training could be boring. By having all these different people around, he could train and have fun.

AH: You use fairly simple language to describe the fight against Larry Holmes when Ali loses his title, but it still brought me to tears–literally. Was it absolutely heart-wrenching to be there? Can you tell us more about how it felt to be so powerless to avert this disaster?

TS: Yes, it was heart-wrenching and the night before Ali left L.A. to fly to Deer Lake, PA, to open his training camp for the Holmes fight, I cried myself to sleep, sobbing for more than an hour. But, when Muhammad makes up his mind to do something, he spends 24 hours a day justifying his decision and he is very good at it. He did it for the money, $8 million, period. He told me, “Wouldn’t you do it for the money if you knew that you could take care of your family and friends for years to come?”

AH: At one point in the book, you visit a Hollywood psychic who says, “You and Muhammad Ali are friends because you both communicate on a higher spiritual level, Muhammad has befriended you because he sees in you what he sees in himself: a pure heart.” After reading the story of your friendship with Ali, even as a stranger who doesn’t know either one of you, this statement resonates with truth. How special is it to be friends not just with a person but also with that person’s beautiful soul?

TS: I don’t want to come across as arrogant, but to me, it feels natural, the way it should be. It was the way I felt about five minutes after meeting Muhammad. I was singing Smokey Robinson in a high falsetto. After I had finished, Ali tells me, “White boy, you had to be a nigga’ in your previous life.” He would then, in future introductions, introduce me as his cousin, saying, “He looks white, doesn’t he? He’s been passin’ for years. This is my cousin, Tim Shanahan.” I really did feel like his cousin, or at least some close connection to the spiritual soul of the Greatest.

AH: Thanks again, Tim, for spending some time with Book Club Babble. We wish you every success with Running with the Champ