Roxana Arama’s debut novel, Extreme Vetting, weaves the experience of balancing the needs of both American and Romanian families, living in a culture different from the one in which you grew up, working in a field that judges your worth based on how you sound in English, and the injustices of the US immigration system. Based on Roxana’s personal experience and dedicated research, this book couldn’t be more timely or relevant, especially in today’s divisive political climate.

I am so pleased to welcome Roxana to Book Club Babble today. Her guest post provides a little of her personal history and recommends eight books by immigrant authors which she feels bring color and life to this unique experience.

I moved to the United States in February 2001 from Romania with a job in software development. In the beginning I 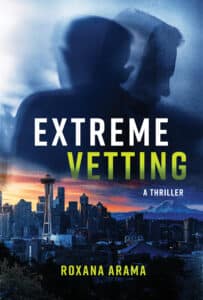 didn’t think of myself as an immigrant—that was something the corporate lawyers who applied for my green card called me. To myself, I was just a college graduate with a promising future. Many of my coworkers were also from foreign countries, so I didn’t stand out. But after 9/11, green card applications were delayed for years. My promising future grew distant. The software company I worked for renewed my H1-B visa and applied for employment authorization to keep me in the US. Other immigrants weren’t so lucky though, as their home countries were now subjected to visa caps.

A year into my marriage, I abandoned the corporate immigration process and started all over again with the sponsorship of my American-born husband. At last, I received my citizenship almost nine years after arriving here. There was now a stable life for me in the US—until the 2016 presidential campaign, when “immigrant” became a dirty word for many American voters. When I heard the new president compare us to venomous snakes that should be crushed underfoot, I was heartsick for days. To defy his efforts to dehumanize us, I soon started working on a legal thriller about our complex and broken immigration system and the human beings trapped inside it.

My protagonist is an immigration lawyer who fights to keep her client from being deported to the country where his family was murdered many years ago. Then she finds out that the killers are coming here—for both of them. She’s a single mom and an immigrant herself, and she tries to protect her daughter and her client’s children as she uncovers a deadly conspiracy involving an ICE prosecutor, stolen data, and human trafficking.

Here are eight other debuts written by immigrant authors, featuring themes I explored in my own novel and themes that expanded my understanding of immigration.

This courtroom drama is so much more than just a compelling whodunit. It’s a story about the sacrifices and tragic mistakes parents make to ensure a better future for their children. For Pak and Young Yoo, who left South Korea to give their daughter Mary the best start in life, things turn catastrophic when their business is destroyed in an explosion and Mary spends months in a coma. How would things have been different had they never left their native country? That’s a question all immigrants grapple with. For Young, there is also the urgent question of who had lit the cigarette that started the fire and killed two people. And who can she trust now, when her child’s life hangs in the balance?

Fruit of the Drunken Tree by Ingrid Rojas Contreras

The author lived through the times of Pablo Escobar in Colombia, and her father was once kidnapped by the guerrilla. In her novel, she portrays the tension between a family’s efforts to lead a normal life and the everyday terror of car bombings, assassinations, and kidnappings. The story is told from two perspectives. One is young Chula, who lives in Bogota until her family receives asylum in the US after her father’s kidnaping. The other is their maid Petrona, who’s only thirteen when she starts working for Chula’s family. The two children are tied by terrible secrets, and Chula’s narration as a teenager living in Los Angeles shows in heartbreaking detail how immigrants can never forget the trauma that forced them to leave their home countries.

This short story collection explores difficult aspects of immigration with compassion and understanding: from parents left behind in home countries, to the clash of cultures immigrants experience in their adoptive countries, to their children’s need to define their own lives. The ups and downs of normal lives—either in South India, Washington State, or elsewhere—are hurt by the missing support between generations and the lack of role models for an immigrant’s life abroad. Someone’s death is also a question about the children who are not present at the funeral. A divorce is also a judgement on a family that couldn’t stay together in a foreign country. A wedding is a time for comparing how immigrants have fared. But these stories are also about the resilience of immigrants forging new lives without a roadmap.

The Son of Good Fortune by Lysley Tenorio

Excel is an undocumented nineteen-year-old trying to build a life away from his mother Maxima, a former action-movie actress who left the Philippines when she was pregnant. For a while, he lives in a desert commune with his girlfriend, but when he starts a fire by accident, he’s forced to return to Maxima’s apartment. Now life comes at him in force, and he can no longer cope by keeping a low profile. He can’t drive, his boss abuses him, and he might soon be a father. Being undocumented consumes him, his every choice defined by the reality that he was born on a plane on the way to America but can’t board a plane to save his life. This story is about the humanity of undocumented immigrants and the people who love them.

Young Ivy learned how to be a thief from her Chinese grandmother who quotes ancient proverbs to justify that behavior. She’s also friends with a teenage Romanian immigrant who breaks into neighbors’ houses. What in one culture is considered reprehensible, in another is seen as resourceful and resilient. This tension between cultures teaches Ivy how to master deception and hide her otherness. But when she meets an all-American boy from a wealthy family, she tries to build a future with him, safe from her past. But that past catches up with her. Her grandmother’s insight about the value of human lives in China provides Ivy the cover she needs to get what she wants in her own life in America—all at a huge price.

Immigration usually implies the agency of those forced to migrate away from their native countries. In this novel, the reader sees the other side of forced migration: being kidnapped and sold into slavery. The novel reads like a collection of short stories, with each chapter following a generational link from the eighteenth to the twenty-first century in two parallel family trees originating with two half-sisters in Ghana. One of them is married to a British slave merchant, the other becomes a slave shipped to America by the same man. A story that starts in a dark time in human history ends with hope for humanity as the two branches of the long-separated family come together to build a better tomorrow.

The Affairs of the Falcóns by Melissa Rivero

Ana is an undocumented immigrant living in New York in the 1990s with her husband and two young children. They left Peru during times of corruption, poverty, and strife, and Ana is determined to build a safe home for her family in the US. But she doesn’t have the legal protections citizens enjoy, and people take advantage of her undocumented status at every turn. While her husband is ready to return to Peru, Ana fights for her children’s future here. She never misses a tuition payment at their Catholic school, even when she can’t make rent. As with many immigrants, this determination comes from trauma that made Ana leave her home country. Her perseverance and ability to change are astonishing to watch as the stakes get higher and her choices fewer.

Daughters of Smoke and Fire by Ava Homa

Leila and her younger brother Chia were born in a country where the life of a woman is worth half the life of a man, and where men and women are routinely imprisoned, tortured, and executed for disagreeing with the state. They’re from the city of Mariwan in the Kurdistan Province of Iran. From birth they develop on different tracks: Leila’s life is full of love and suffering, while her brother continues their father’s fight for Kurdish independence. Inspired by the life of Farzad Kamangar, who was executed by the Iranian state in 2010, this novel is both a lyrical tale and a page-turner. There’s a lot of heartbreak in this story, but also hope for a better future, as Leila emmigrates to Canada and starts learning how to love without suffering.

In closing, here are Ava Homa’s thoughts about books like the titles on this list: “Literature cultivates our senses by humanizing the unpeople—the “ungrievable lives” in Judith Butler’s words—by encouraging us to recognize our (un)conscious human/less human binaries. Literature fuels us to bring awareness to and change our conditioning formed over thousands of years, according to which a person who looked different was equated with danger.”

Roxana Arama is a Romanian American author with a master of fine arts in creative writing from Goddard College. She studied computer science in Bucharest, Romania and moved to the United States to work in software development. Her short stories and essays have been published in several literary magazines. Extreme Vetting is her first novel. She lives in Seattle, Washington with her family. More at RoxanaArama.com.