I love it when an author makes unconventional choices and thoroughly succeeds! Rebecca Kelley set up a challenge for herself when she showed her story’s ending first – never my favorite choice. I love that despite my preference, she taught me I could love this technique if it was done right. You see, the story isn’t about murder. The story is about Rosemary learning to see herself as someone who can help. In her own way, the decisions she makes to protect her sister – becoming an escort and getting involved with a possessive man – provide a sort of empowerment. Even if we might view them as misguided. We’re thrilled Rebecca was able to share a little more about how No One Knows Us Here came to be!

Amy Wilhelm: Rosemary is an unlikely heroine, but I love her for her realness. How did you paint such a realistic picture of her damaged-but-trying personality? 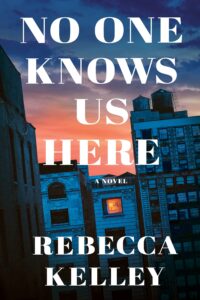 Rebecca Kelley: I first came up with the idea for No One Knows Us Here when I wrote a list for Bustle called “These Novels Should Have Had Female Characters” way back in 2014. One of the novels was Crime & Punishment, and that’s when I started thinking of what a female Raskolnikov would be like—someone who is damaged and also starts to get a bit desperate, leading her to justify (with her own brand of logic) a horrible crime.

AW: In No One Knows Us Here, your first scene is a woman stabbing a man. Why do you think it’s important to put female characters in roles usually given to males?

RK: It’s not that I think that women need to become more violent or act more like men in real life. If anything, men should resolve problems more like women! In fiction, though, it interests me to see women making terrible choices and committing crimes. There is something cathartic (if not exactly realistic) in seeing women take matters into their own hands.

AW: Rosemary wants to help her sister, but it’s difficult to escape her self-preservation instinct, making her appear selfish sometimes. Why does she struggle between putting her sister and putting herself first?

RK: At the beginning of the book, Rosemary is convinced that she is better off on her own and that everyone else is better off without her. Her little sister Wendy is going through so much, but Rosemary doesn’t seem to notice or care. I think of this as her primary struggle throughout the book, accepting that she has the capacity to love and care for her sister.

AW: What inspired the specifics of this storyline? What’s your newest story idea?

RK: Crime & Punishment was definitely the initial inspiration behind No One Knows Us Here, though it eventually turned into something quite different. I have a new story idea that is also a riff on a classic book—this time, it’s Theodore Dreiser’s An American Tragedy. It’s in the early stages, though, so we’ll see!

Rebecca Kelley is an author and graphic designer whose first novel Broken Homes and Gardens,  was published in 2015. Her second novel is  No One Knows Us Here, released by Lake Union Publishing on January 1, 2023. Rebecca holds a master’s degree in Creative Writing from Portland State University. She taught writing for 15 years and has written articles for Bustle, The Rumpus, Metro Parent, Scholastic, and Parent and Child. When Rebecca isn’t writing, she is conducting elaborate baking experiments, designing book covers, and keeping up her thousand-day-plus streak in Duolingo. She lives in Portland with her husband and daughter.