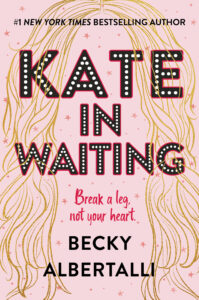 Kate in Waiting is bestselling author Becky Albertalli’s (of Simon vs. the Homo Sapiens Agenda fame) latest YA rom-com. It features theatre kid Kate (cue jazz hands) and her misadventures with romance during junior year. Kate and her attached-at-the-hip bestie Andy are used to crushing on the same guy. Call it a friend thing. Call it a Kate-and-Andy thing. Call it a way-to-cushion-the-inevitable-rejection thing. Whatever it is, they decide they both like Matt, a cute senior voice coach from their theatre camp. It’s all for fun, though. They admire him from afar and assume they’ll never see him again once camp is over. Neither bothers to find out if Matt is even gay or straight.

Only…guess who shows up at their school in the fall? None other than Matt! Now that their harmless crush has materialized IRL, things are different. As they get to know Matt as an actual person, Kate and Andy decide they both have feelings for him. Though they promise to be happy for each other if he ends up liking either one of them…it doesn’t really work. When Kate and Matt are cast as love interests in the school play and have to literally practice kissing all afternoon (for art!), Andy is uncomfortable. But when Matt finally tells Kate he’s gay…and that he’s dating Andy, Kate is gob smacked. Not only does she feel stupid for being convinced Matt was interested in her—her very best friend kept their relationship a secret.

There might be a light at the end of the tunnel, though. Kate’s older brother’s best friend Noah has been hanging around a lot. Sure, he wants to bro it up with Ryan, but then again, maybe there’s more to it. One could attribute Noah’s sudden interest in theatre to his broken arm and sidelined baseball season…but maybe a certain girl waiting in the wings is part of it. Because even though Kate has been shy about the limelight, Noah’s got her in mind for his leading lady.

Albertalli’s new book was fun and engaging, as normal. She really captures the voice of theatre people, which can be amusing or A Little Much, depending on your tastes. For me, extra was extra—Kate was an endearing protagonist. I also appreciated the way the author explored the friendship between Kate and Andy. I remember feeling an obsessive bond with friends, but it always shifts at some point, and when it does, that’s an important moment. My one quibble was that neither Kate nor Andy wanted to find out what Matt’s sexual orientation was before they “claimed” him, which seemed like a pretty big oversight on their parts. Of course, at that age, not everyone advertises it—or knows it. I love YA books because everything about being a teenager is a big deal, especially relationships, and this story captured that magical mix of unknowing, learning, and discovery that makes the genre wonderful. 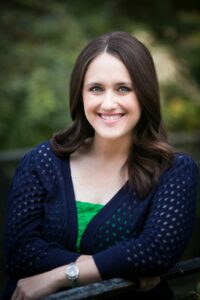 Becky Albertalliis the author of William C. Morris Award winner and National Book Award longlist title, Simon vs. the Homo Sapiens Agenda(now a major motion picture, Love, Simon); the acclaimed The Upside of Unrequited; #1 New York Times bestselling Leah on the Offbeat; Love, Creekwood; What If It’s Us(co-written with Adam Silvera); and Yes No Maybe So(co-written with Aisha Saeed). Becky lives with her family in Atlanta. You can visit her online at www.beckyalbertalli.com.