Jody Hadlock’s debut novel, The Lives of Diamond Bessie, features the 19th century murder of a sex-worker at the hands of her husband. This impeccably researched historical fiction tale with a twist, based on the real life story of an Irish immigrant turned prostitute and the trial following her death, has garnered rave reviews. We caught up with Jody Hadlock to learn more about her captivating debut novel. Welcome Jody!

What inspired you to write this novel?

I learned of Diamond Bessie during a visit to Jefferson, Texas, which is three hours east of Dallas. I’d never heard of 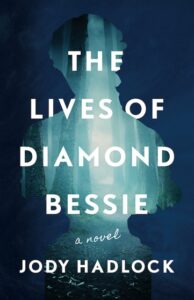 Jefferson even though I grew up in a Dallas suburb. I was amazed to learn it was a booming inland riverport in the mid-1800s. At Jefferson’s historical museum there was a full-page newspaper article about a 19th century prostitute, known as Diamond Bessie, and her paramour, Abe Rothschild, on display. It was published in a Dallas newspaper in the 1930s. I thought, “Why in the world was this paper interested in something that happened nearly 60 years earlier in a tiny town a few hours away?” And I had another thought, but I don’t want to give away the plot for those not familiar with the story. I was immediately hooked and knew I had found what I wanted to write.

It’s been nearly 150 years since Bessie’s death. Why is she still remembered after all this time?

Any time there is an injustice, I think people remember that far longer than if justice is served. Also, newspapers around the country covered the incident and the subsequent events, which lasted about four years. And Jefferson, Texas, where the crime occurred, was, and still is, a small town. The citizens rallied around this woman, who was pretty much a complete stranger, and went to great lengths to try to get justice for her.

In your book, you have a scene where Bessie is being reprimanded for reading novels. Why were women discouraged from that?

I was shocked when I learned that during my research. It’s unbelievable to us today, but back then it was actually thought that novel reading—for women specifically, not men—led to nervous disorders. There’s a list on the internet that’s been circulating around for several years that shows the reasons why women were admitted, or committed, to the West Virginia Hospital for the Insane between 1864 and 1899. It was compiled from the hospital’s logbook. Novel reading is on the list. It doesn’t mean that reading novels per se led to the admissions to the asylum, but rather that the activity helped cause the disorder that led to the stay at the hospital.

Why did women enter the world’s oldest profession back then?

It was almost purely economic, for survival. In the 1800s, women had few rights or opportunities, and when they did have to work outside the home, they made far less than men. So much less that it often led women to become at least part-time prostitutes. They would meet men at “assignation houses,” places for illicit sex. A woman who became a demi-mondaine at a first-class “parlor house” could make far more money than any other occupation available to her.

How much of The Lives of Diamond Bessie is fact vs fiction?

Not much is known about Diamond Bessie’s childhood and early adulthood, so the first part of my novel is more fiction than fact. But it is an accurate portrayal of a woman at that time who became a prostitute, what the reasons may have been, and what her life would have been like. The second half is very much rooted in fact, though obviously I had to fictionalize some of it. The afterword describes some of what is fact and fiction, and I’m working on a very detailed chapter-by-chapter breakdown in the “Book” section on my website at www.jodyhadlock.com.

About the Author: After studying journalism at Texas A&M University, Jody Hadlock was a television news reporter and anchor in Bryan-College Station, Texas; Charleston, South Carolina; and San Antonio, Texas. The Lives of Diamond Bessie is her first novel. Find out more about her and her writing at www.jodyhadlock.com. She can also be found on Instagram at www.instagram.com/jodyhadlock.