Pintip Dunn’s new sci-fi YA, Star-Crossed, is a clever space opera set on a colony with very few resources.  The colonists can’t grow enough actual food to feed everyone, so a select few are designated to be Aegis: the people who eat. They eat until their bellies are full, and then nutrition is extracted from their bodies and made into a pill. The supplement is distributed to everyone else. It keeps people alive, but the non-Aegis colonists are constantly hungry. However, if they eat even one bite of real food, the pill won’t work, and they could die.

The colony is built on sacrifice, but teenage princess Vela is over it. It seems everyone is suffering. Her best friend is dying because Vela snuck her food since they were kids. Her father, the king, is dying too. He’s old and his Aegis organs are giving out. Keeping him alive means selecting the fittest among them to sacrifice as an organ donor to the king. The worst part of all? Vela’s love interest is the fittest. This story has it all: cool space technology, competitions for power, fights to the death, and of course: star-crossed lovers. 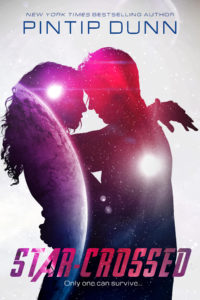 Pintip graciously shared her time to tell us more about her new novel.

Mary Sullivan: Much of this book is about hunger. Some of it is the literal hunger of the colonists, of course, including Vela’s friend who is dying from a lack of food. But it’s about other hungers too. There is Vela’s longing for her love interest, Carr. There are also personal desires versus the requirements of the colony. What made you write about hunger?

Pintip Dunn: I love this parallel you draw between the hunger for food and the hunger for other things! To me, young adult stories are about discovering who we are — and often, that person is stronger and braver than we ever dreamed possible. Our desires often motivate us to reach our highest potential, so that is why yearning always plays a part in all of my books, although it is perhaps the most explicit in Star-Crossed.

The reason I wrote about the hunger for food, in particular, is because my husband and I are total foodies. For over a decade, we would say to each other after a particularly big meal, “Wouldn’t it be great if we could transfer our calories to someone who really need them?” One night, I was lying in bed drifting off to sleep when it suddenly struck me that this would make a pretty cool idea for a book. (I’d also like to note how often ideas come to me as I’m falling asleep!)

Of course, the premise of Star-Crossed is a little more complicated. Because land is scarce on the planet of Dion, not enough food can be produced to feed the entire colony. Thus, Princess Vela steps up to receive a genetic modification so that she can convert food into energy more efficiently. The nutrition is extracted from her via a pill and distributed to the rest of the colony.

The genetic modification means that Vela’s life will be cut short by 60 years — but that’s not her worse problem. She’s been tasked with choosing a boy fit to die so that her father, the King, may continue to live. But the person who emerges as the best candidate is . . . the boy she’s loved all her life.

MS: Many people today (on Earth!) fear modern technologies like GMOs and AI. I was interested in the way you addressed these issues. In the book, the GMO seeds the colonists use to grow food shorten people’s lives by many years. CORA, the AI that helps the colony’s government make decisions, has limitations. Why prompted you to write about GMOs and AI?

PD: My characters find themselves in a difficult situation. They’ve arrived on a planet that they expected to be fully habitable, only to find that the terra-forming pods had malfunctioned. Thus, they can only live inside an energy shield that they hastily erected — and they cannot grow enough food to feed the population. What’s more, they’re 100 light years away from Earth, so help — if it’s even coming — is decades away.

My story is science fiction, rather than fantasy, so I wanted to force my characters to find a solution based on science. Genetic modification was one such answer. It accomplishes the same thing as a magical power, but it is a little more grounded in the real world. In addition, I included CORA, the almost-AI computer, because I wanted to take certain decisions out of human wisdom and suggest that while there might be one “correct answer,” based on all of human knowledge and history, it still might not be the morally right one.

MS: A big part of the story is the competition between Vela and her sister Blanca for who will take over the colony after their father, the king, dies. As someone with two younger sisters, I can attest to the fact sibling rivalry is definitely a thing? Why was it important to include this type of relationship in the book?

PD: I love exploring all relationships, particularly those between siblings. In the Forget Tomorrow series, I wrote about the unconditional love between older sister and much younger sister. So, with Star-Crossed, I really wanted to show how an entirely different sibling relationship can also result in love. Blanca is definitely an interesting character. She’s reserved, analytical — and at first glance, she is very cold. While warm and passionate Vela was easy for me to love, it took some time for Blanca to grow on me. Her arc to redemption began in this novel, but it won’t be fully realized until the sequel, Sky-Kissed!

MS: A central story line in the book is about how to best manage the welfare of *most* people when there are finite resources. As long as colonists never try a bite of food, they can be nourished with a supplement their whole lives—eight decades. However, if they steal even a bite, the supplement no longer works, and they will perish without food. The problem is, the colony cannot give them actual food and sustain itself. Do they just let these people die? Is it fair to give them resources the colony doesn’t have when they “cheated”? Why did you decide to write about this conflict between personal desire and collective responsibility?

PD: I think the dichotomy between personal desire and collective responsibility is an issue that I return to again and again in my writing. I love exploring difficult moral questions — or as some of my readers call them, “impossible” moral questions. Most of the time, these really difficult questions come up when you are juxtaposing personal desire against collective responsibility. For example, in what situation would you ever consider killing your little sister? Or your father? Or the boy you love? It’s usually because of the greater good. None of my characters ever want to take these actions. But sometimes, they are up against a rock and a hard place, and they have to decide which is more important to them. Personal desire or collective responsibility? I’ll give a spoiler for my books and say that my characters don’t come down on one side or the other every time. I find that exploring this line is endlessly fascinating.

MS: Can you share a little bit about your writing journey? You write in many subgenres, often linking suspense, romance, and sci-fi. How did you come to be an author?

Oh, boy. The short answer is that my path to become an author has been long and very winding!

I’ve wanted to be an author ever since I was six years old, but I was dissuaded from my dream because it wasn’t impractical. Because of this discouragement, I didn’t write my first novel until after college. Even after I wrote that first disaster, I had many detours and interruptions — law school, legal career, motherhood.

Eleven years after I wrote my first book, I signed with my agent on the fourth novel I wrote, Forget Tomorrow. At that point, I had received 100 rejections from agents. Three years, three books on submission, and fifty more editor rejections later, I finally sold Star-Crossed.

Things began to happen quickly, then. In the space of seven months, I sold a total of seven books. My debut, Forget Tomorrow released in November of 2015. Now, nearly three years later, I just published my sixth novel with Star-Crossed, with my seventh one, Malice, will be coming in February of 2019.

Pintip’s novel FORGET TOMORROW won the 2016 RWA RITA® for Best First Book, and SEIZE TODAY won the 2018 RITA for Best Young Adult Romance. Her books have been translated into four languages, and they have been nominated for the following awards: the Grand Prix de l’Imaginaire; the Japanese Sakura Medal; the MASL Truman Award; the Tome Society It list; and the Romantic Times Reviewers’ Choice Award. Her other titles include REMEMBER YESTERDAY, THE DARKEST LIE, GIRL ON THE VERGE, STAR-CROSSED, and the upcoming MALICE.