I’m so pleased to welcome Dilani Kahawala to BCB today. In her guest article, she talks about her path from physicist to fantasy writer, shares some world building basics, and discusses her debut novel Blood Moon Prophecy. Welcome Dilani!

My journey into fantasy writing is pretty unconventional. Growing up, I was a super nerd science enthusiast. While I read a lot of fantasy, becoming a writer wasn’t something I thought about until much later. In college I became really interested in fundamental physics – the physics of how the universe works. After college I started a PhD in theoretical particle physics at Harvard and spent the next five years in almost a literal ivory tower, thinking deeply about the fundamental laws of the universe. After graduating from my PhD I decided to pursue a career in tech. But little did I know that soon afterwards, my days of musing about the magic of our universe would translate into thinking about the magical universe of Marea in my new YA fantasy novel Blood Moon Prophecy.

In the story 16 year old Tilly Nyx has to unravel a mystery thousands of years in the making to figure out the secrets of her own past. Armed with an ancient map that her mother made her swear to protect with her life, Tilly’s journey takes her from New York City to the world of Marea. It is a world of oceans and sailing ships, of feuds between ancient magical families. She joins a fleet in search of the secret her map holds, which has been guarded by her family for four thousand years. As Tilly learns how to cast sprites and make potions, she and her three friends must follow the trail of murky, disturbing clues left by her ancestors before time runs out. But the closer they get to their destination, the more Tilly discovers that nothing is what it seems…not even herself.

When I was constructing the world that is Marea, with its magic system and laws, I relied heavily on how I used to think about problems as a physicist. During my PhD I worked on something called ‘model building,’ which is coming up with theories about the fundamental rules of how the universe works, that also explain everything we see and experience today. It’s hard! There are so many constraints and all the parts of your theory have to come together in just the right way. All the rules fit together perfectly, in the most incredible way to give us our universe from the smallest subatomic particles to clusters of galaxies, and there are still a few deep mysteries left to solve!

Coming up with Marea, and the magic in it, was similar. I didn’t have to write any equations, and physics models are of course tested by rigorous experiments, but stories are tested in their own way by readers. All the pieces have to make sense together and feel real, so much so that the reader doesn’t bat an eyelid when they make the transition. One example is sprite casting. Casting sprites takes effort and energy. Similarly, when someone else snatches your sprite, you’ve lost that little bit of magical energy forever. It’s not infinitely free to use magic in Marea and that’s a relatable experience for the reader, and makes the magic much more interesting.

It took me years to refine all of the rules, laws and the magic system that you see in Blood Moon Prophecy. It took even longer to figure out how to give the reader just enough insight at the right time, without bogging them down in pages and pages of magic rules. After eight years of thinking and refining, I hope the world of Marea is a place that readers can truly get lost in and keep coming back to again and again. 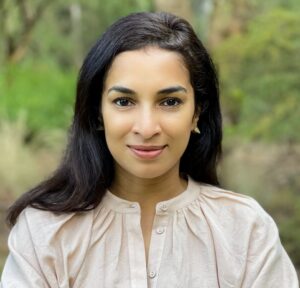 Dilani Kahawala earned her PhD in theoretical physics from Harvard, and began her career by working on extra dimensions (no, seriously!). She figured out pretty quickly that there weren’t many people who wanted to read her work as a theoretical physicist, so she began exploring new dimensions in fantasy fiction. Many of the characters in her stories are inspired by the various cultures she grew up in. Born in Sri Lanka, she has lived in New Zealand and Australia and now lives in the United States. When she’s not writing, she’s chasing after her two toddlers with her husband, eating pizza, and watching escapist movies. You can find Dilani at her website: https://dilaniwrites.com/