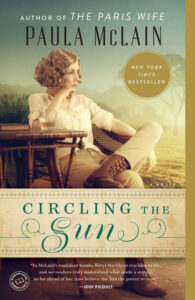 Paula McLain, author of The Paris Wife, hit a home run with Circling the Sun  (2015), her historical fiction take on intrepid aviator Beryl Markham’s life. After reading the book, I can’t believe I’d never heard of Beryl before diving into this engrossing story. It opens with her on the (THE) inaugural flight for humans across the Atlantic from England to New York. I’d only ever known about Charles Lindbergh’s transatlantic flight, and though Markham did her east to west traverse following Lindbergh, it was still quite a feat. However, most of this book is not about Beryl’s piloting days. It centers more on her early childhood and formative years in east Africa, and how that experience prepared her to take on such an endeavor.

Beryl Markham moved at age four to the British East Africa Protectorate (modern day Kenya) so her parents could start lives as farmers in the Rift Valley. This was wild territory, and all domestication of the land came from their own, and eventually their workers’, sweat. The family lived in a simple hut until they could build up their business and a real house. However, colony life wasn’t for Beryl’s mother or sickly older brother, and so they left when Beryl was a young child, leaving her and her father to make it in Kenya. Keep in mind, this is when Nairobi was but a provisional outpost. But make it they did until her father had created a renowned horse farm and race-training facility. When he lost it all in a drought and economic crash, Beryl couldn’t bear to leave her home, so she stayed behind and eventually became the Protectorate’s–and probably Africa’s–first certified teenage female horse trainer.

After winning races, despite the expected sexism of the time, she married at a tender age, thinking a husband would give her support once her father left. Unfortunately, it was a bad match both because of who she married and due to Beryl’s unorthodox view on social conventions. Not wanting to be harnessed by matrimony, careers, or sexually, she embarked on many great love affairs–including with famed aviator and big game safari hunter Denys Finch Hatton. You know him as Robert Redford’s character in Out of Africa. Yes, he was a real person and despite loving Meryl Streep (er, the writer Baroness Karen Blixen), he couldn’t help himself around Beryl, either.

If you think this sounds interesting, then I recommend digging into McLain’s novel. I barely looked up until I’d absorbed all of Beryl’s adventures, mistakes, and forged paths. Just be sure to clear your weekend before picking it up.