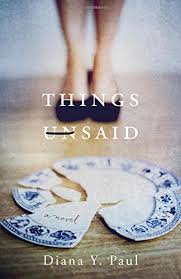 This week we continue our discussion with Diana Y. Paul and ask her questions about her debut novel, Things Unsaid. If you have not read it, it is a thoroughly enjoyable book, with solid, believable characters, plenty of salacious family drama, and ultimately a universal theme. It’s a role reversal that most children eventually face and that is caregiving for their aging parents—a matter that will always be relevant to the human condition.

Every good story needs a complication and Diana Y. Paul’s debut novel Things Unsaid delivers a good one. Do you have a moral obligation to take care of your parents in their old age? What if your parents are living beyond their means and they need you to bail them out? What if you are the “responsible” sibling, but the one least favored by your parents? Snap!

Maribel: You can’t read this novel without thinking, “Wow, how will my siblings and I handle these same situations? What will my role and my siblings role be when our parents can no longer take care of themselves?” Was there something or someone in your life that inspired you to write about this very significant period in everyone’s life? 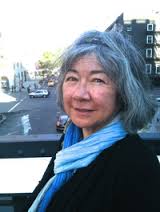 Authenticity of time and place is critical for any novelist’s story to be credible. The reader has to become engrossed in the characters and their world. I grew up in the 50’s and 60’s, an era considered one of the most prosperous of economic times in US history. It is also a time of intense racism, sexism, feminization of the home and domestic sphere, and a segregation from the re-masculinization of the workforce. This was also the era of Cold War paranoia. I remember those times so vividly! I did not have to do as much research as I definitely would have had to do for an earlier time.

I think I was more inspired by my cohort of friends, who seemed to respond to their parents’ needs in a similar way. Why was this, I wondered. That was the inspiration– why do we feel we have to take care of our parents at all costs? When is enough enough? This is a universal question, isn’t it? Our mothers succumbed to internalized social and cultural pressures of the time. These talented, educated women had few options in American suburbia. They had dreams that were not fulfilled in many cases; the obstacles and social ostracism were too great. This situation for women inspired me to write Things Unsaid, to write about a damaged spirit, Aida Whitman, the principal antagonist. She is a stand-in for women in the “Mad Men” generation.

Maribel: Jules’s mother Aida is a very entertaining narcissist. Aida Whitman is exceptionally self-absorbed, sometimes to the point of grandiosity. And her backstory did exactly what a well-executed literary device should: lend depth and believability to a character. In the beginning of the novel, we meet Aida Whitman in her 80s. She is still obsessed with looks and appearance, but her rich past softens the gritty exterior that has become her superficial persona. One minute we are frustrated with Aida’s vanity and selfishness, and then the author takes us back to her days as a young nurse at the Montefiore Hospital in the Bronx. And not just any nurse, but the best-looking nurse. One who transformed into a sultry, singer at her uncle’s club every chance she got. Her name and her resemblance to Elizabeth Taylor were eventually parlayed into marrying the resident doctor, Bob Whitman, now her husband. Was writing about Aida as fun as it was for us to read about her?

Diana Y. Paul: Absolutely! It was exciting and entertaining to write about a consummate, self-absorbed narcissist, Aida, from a composite drawn from discussions about mothers in my friends’ “Ladies Night Out” group. We all had stories to tell. It seemed that many of our mothers were obsessed with their looks, a characteristic trait of some suburban wives in the 50’s and 60’s.

Any complex, three-dimensional character in a novel’s narrative has to have a positive or softer, more empathetic side as well as a negative, or flawed, less likeable aspect to his or her personality. Aida, as a selfish and vain mother, had to have an intricate backstory to explain how she became the person she was. That was the fun part about writing Aida’s point-of-view. Since she was a disturbing character as an eighty-year-old mother, I had to ask: Would the reader understand why she is the way she is? I wanted the reader to grasp why Aida was gritty, superficial, and manipulative. The reader doesn’t need to like her, but needs to understand her. Aida’s character arc required circumstances which revealed her broken dreams and subsequent simmering anger and defeat. I hope I achieved that in imagining her lively, optimistic younger self.

Maribel: Then there is her husband Bob. He was once a hard-working doctor who toiled anywhere at all hours to provide the best for his family. Now, at 84, having failed at money management, he feels like he doesn’t have much to show for a lifetime of hard work. These two characters come across as brutally honest human beings who value their self worth, but who are still somewhat blinded by the challenges that they unintentionally thrust upon their grown children. What inspired these two characters?

Diana Y. Paul: The “Mad Men” era was my “coming-of-age” years. Experiencing how we grew up in “single mother” households with absentee fathers whose self-worth was defined by how much money they had. The time period is what inspired me to conceptualize Aida and Bob Whitman. The wallet encapsulated who a man was, who a “good father” was.

I remember listening to conversations of male relatives who were “breadwinners” and hear the regret in their voices. They admitted to feeling that the cost was too high—to work relentlessly for a higher standard of living, sacrificing participating in their children’s daily lives. Children “grow up so fast”, they confessed, “without their fathers.” That is the heartbreaking core of Bob Whitman’s story. He doesn’t know how to be a father. He’s only a “shadow Dad”. Aida, of course, doesn’t know how to be a mother either, but for different reasons, as I’ve mentioned.

Maribel: As the story unfolds, so does the drama in the main character’s life. The people in Jules Foster’s life, her daughter and husband, are sick and tired of playing second fiddle to her parents. As a reader, it became clear just how easily it can be to repeat the “sins of the parents.” You go about doing your absolute best to raise your children, but seem to always fall short. Someone or something is always neglected. Grown children resent certain things about their upbringing, but sometimes are blind to their own faults, until they are not:

“What stupid mistakes she had made. Mistake after mistake. She was a practicing Zen Buddhist, and although she was grateful she had adopted Buddhism, her Zen practice didn’t seem to help now…According to Buddhism, the good mother gives up her own ego and desires in order to be a mother. But until she knows what she needs, she can’t become enlightened…”

You would have to be made of stone to not have any compassion for Jules’ character. She is the one sibling who is the most mindful of the life processes playing out before her. She is trying her best to not only put out her parents’ financial fires, but also trying to keep her own home fires going. But this story is about trying to juggle so many real-world obligations amidst a sea of ever-growing problems. While working on this story, what kind of research did you do to flesh out the characters? Are your parents around and do they know about it? If so, what are their thoughts?

Diana Y. Paul: My parents are now deceased, but were alive and thriving when I first started to write Things Unsaid. At that time I was almost certain neither one would care to read my novel. My mother was basically a non-reader, except for the occasional Reader’s Digest, and my father read mostly professional journals. However, if they were to read Things Unsaid today, I think my mother would have felt that Aida had some of the same disappointments in life common to women of her generation. My father would agree that the portrayal of men as the “head of the household” with all its accompanying pressures was realistic, raw, and brutally honest. For my father I think it was a major regret in his life that he didn’t really witness his children growing up or get to know them.

I also think my mother would have been proud that there was a novelist in the family. Then she would ask when the movie was going to come out, and could she have a minor role in it.

How much either of my parents would identify with scenes in Things Unsaid would be just a guess. I’ll never know. Some scenes are taken from my own childhood but were embellished, re-imagined, and recreated for pacing and plot development. I have friends who ask me: “Did that really happen to you?”—which is a natural question when you know the author. And the scenes they ask about are almost always ones I completely imagined or borrowed from friends’ stories. I am always taking notes, eavesdropping on others’ conversations, and recording family stories. So, friends of writers—beware!

Diana, once again, thank you so much for sharing your writing and for doing this interview for Book Club Babble.