Paradise, WV is a thriller with heart and humor – a rare combination in this genre, pairing as beautifully as wine with cheese. As a matter of fact, bring this refreshingly thoughtful and complex novel to the party, and you’re bound to have a great night as you get to know Henry and Jane, two teenagers with completely understandable angst. Their father is a convicted serial killer. Try surviving high school when that’s your back story. Survive they do – with Henry using his love of heavy metal as a healthy addiction and Jane digging into her valium supply a bit more often than not.

Neither believes their dad is guilty. The investigation didn’t dig as deeply as it should have because the victims were addicts, and the town believes they are better off without them. When a live podcast about the Blind Spot Slasher – as the killer is known – comes to town, the negative attention on the two siblings gets even worse. But their luck changes when Henry becomes friends with a boy named Otis who is crazy smart, believes their story about their dad’s innocence, and starts searching for evidence to prove it. At the same time, a savvy police officer, looking into another missing woman’s case, finds some interesting parallels with the Blind Spot Slasher.

We’re so thrilled Rob took time out of his busy schedule (writing a television pilot!) to chat about his terrific thriller.

Amy Wilhelm: You set your novel in West Virginia. What made it an ideal backdrop for the themes you play with in Paradise, WV? 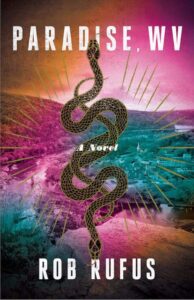 Rob Rufus: I watched a documentary about a serial killer who acted with impunity during the crack epidemic of the 80’s because he prayed on addicts. It shook me because I know the exact same thing could happen in my hometown due to this opiate epidemic.

AW: I love how you’ve made the teenagers, Henry, Jane, and Otis the heroes of your story. It is wonderful how each one of them is quirky and unique in a very authentic way. Their real-life problems DO affect their personalities and choices, and I think that goes a long way to the reader’s investment in the story. Tell me about how each of them came to life.

RR: I was in a scary situation (which is a long story) a few years ago and the fact that I can’t run (because I have one lung) made it 100% scarier. That was where the idea of Henry was born. I have a lot of addicts and recovering addicts in my life, all of which I love dearly, so that informed my creation of Otis. Jane is a version of the less dorky, more driven parts of my personality. I really empathize with a character who feels “too busy” to deal with their own trauma.

AW: Henry is a metalhead. I love that about him, by the way. Did your own background as musician feed into his character development?

RR: Oh, totally! I didn’t want to make him a punk rocker, so that was fun to delve into. This book also allowed me to dork-out on my love of pulp paperbacks, horror movies… I really love that kid.

AW: The unspoken serial killer of the story is poverty, desperation, and addiction. Is the reader left to draw their own conclusions here or did you set out with a purpose to shine a light?

RR: I did. I tried to paint everyone living under that black cloud of death with an empathetic gaze, even the bad guys. You put it more eloquently though, so I may steal that turn-of-phrase, ha-ha.

Rob Rufus is an author, musician, screenwriter, and advocate. He is the recipient of the American Library Association’s prestigious ALEX award. His literary debut, Die Young With Me, was named one of the “Best Books of the Year” by Hudson Booksellers and is currently being developed as a major motion picture. His follow up, The Vinyl Underground, was named one of the Junior Library Guild’s Gold Standard Selections. He lives with his dog in East Nashville, Tennessee. Catch him on the road with his bands The Bad Signs or Blacklist Royals, and learn more at www.robrufus.net