In her fiction debut, Karen McManus delivers a compelling modern day Breakfast Club with a dark twist. Five students head to detention, but only four walk out alive. Told from multiple perspectives, One of Us Is Lying is both a page-turning mystery and an absorbing coming-of-age story for our time. With their lives on display and their secrets threatened to be revealed through a social media app created by their now-deceased classmate, each student in the room has a motive for murder. But things are not always what they seem. With humor, sensitivity, and a good bit of suspense, the novel races toward its thoroughly satisfying conclusion. I am so pleased to welcome author, and fellow Holy Cross alumna, Karen McManus to BCB today!

Tabitha Lord: This feels like a story that needed to be well outlined from the start. The resolution is especially satisfying and believable. When you sat down to write, how much was already pre-planned, and when did the characters surprise you and take the story somewhere you hadn’t anticipated?

Karen McManus: I had the broad outlines sketched out, but there was still plenty of improvisation along the way. One 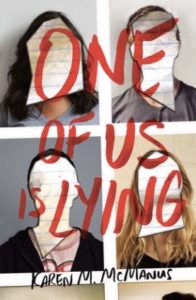 character’s motivation for wrongdoing changed completely when I jettisoned a subplot that wasn’t working. There were relationships that I planned, and others that sprang up organically because the characters turned out to have chemistry and it was fun to put them together.

TL: Teens today have very little expectation of privacy, and with social media, they feel quite comfortable sharing aspects of their personal lives that just a generation ago would seem shocking. Yet Simon’s app goes over the top, and I think it’s partly because it’s designed to be hurtful. Are you hoping to promote a healthy conversation around social media as a result of this story?

KM: I find social media fascinating. Not only because, as you note, it makes privacy seem almost quaint, but because it provides a mechanism for curating your life—showing the parts that you want people to see, while hiding the aspects that are less camera-friendly. But that only works when you control the narrative. If there’s a Simon in the background spilling secrets you’d rather keep quiet, or if a negative story goes viral, it’s very hard to take that back.

TL: All four main characters have secrets that are forced into the light against their will. In fact, this provides a good bit of the dramatic tension in the book and creates motive for any one of them to have wished Simon dead. Some of these secrets are kept out of guilt. But others are kept because the character isn’t ready for the information to become public knowledge. There’s an interesting conversation here around secrecy vs. privacy. Were you thinking about this as you wrote the book?

KM: It’s an interesting parallel to the question above. When you’re dragged across social media because of something you did that’s objectively wrong—well, it’s a pretty miserable experience, but one could argue that the information needed to be out there. Either on a personal level to an individual you hurt, or more broadly if you’ve violated the rules or morals of an institution you belong to. But having personal information revealed that’s no one’s business except your own is another matter entirely. There’s a journalist in One of Us Is Lying who makes that point, and becomes the voice of reason who puts the brakes on the media machine and says: this has gone too far.

TL: At first glance, the main characters appear to represent familiar high school stereotypes – the jock, the popular girl, the brain, the bad boy, and the social outcast. Yet, of course, they are all multi-layered people with hopes, dreams, fears, and interesting backstories. As the reader gets to know the characters and they grow to know each other, initial impressions are quickly dismantled. What are you hoping to impart to your young adult readers, besides the obvious, “don’t judge a book by its cover” message?

KM: My primary inspiration for One of Us Is Lying was “The Breakfast Club.” One of my favorite things about that movie is the bonding that takes place as the characters realize they’re not as different as they thought.

The world constructs so many artificial barriers between people based on surface impressions and narrow definitions: who’s popular, who’s successful, who’s a troublemaker, who’s forgettable. But that public face is never the sum total of any individual. So I hope my teen readers think twice about people in their lives they might have dismissed, and look for ways to find common ground.

TL: From a writing craft perspective, can you discuss your choice to write in the first person, and to give each of the four main characters’ voices equal time?

KM: I’ve always written in first person; it just comes naturally. But it was challenging in a book like this, where I wanted to keep the narrators unreliable as long as possible. The only way to do it was to switch perspective regularly, so each character could reveal bits of information but not get to the whole before it was someone else’s turn. I also felt very strongly that each of them had a reason for being in that room with Simon, and that all their individual stories were necessary to tie the plot together into a cohesive whole. But I didn’t want to be rigid about it, either. Toward the end of the book you get more of one character and less of another because … reasons.

TL: All the characters evolve over the course of the story, but I love Addy’s growth in particular. She begins as that girl who mostly defines herself by her relationship with her boyfriend and by her relative popularity, but by the end of the story she has found her own voice and identified her own dreams. I love that it is two sisters who help each other, and I love that this part of the story is what I’d describe as gently feminist. Can you talk a little about this story arc within the wider context of the book?

KM: Addy is the character you’re not supposed to like at first. She’s shallow, whiny, and obsessed with her boyfriend and her social status. But she also shows flashes of self-awareness—she knows her boyfriend is controlling, and she recognizes that her mother, who’s always pushed her in a certain direction, isn’t a good role model. Addy’s unhappiness, which she refuses to acknowledge consciously, makes her do something reckless that lands her on Simon’s app. And even though it’s devastating to have her secret revealed, and lose everything that’s always defined her, it also gives her a chance to figure out who she is. Ultimately, whether you love or hate Addy for what she’s done, I hope you respect that in the end, she makes her own choices.

TL: Which was your favorite character to write and why?

KM: I loved writing Nate. Even though he’s the last character introduced in the book, his was the first voice I heard clearly in my head. His sections were effortless. I’d sit at my computer with a general idea of what the scene should be, and an hour later it’d be done and require almost no editing. He has far more lines remaining from my original first draft than any of the other three. There’s something magical about a character who is that much of their own person.

TL: Is there another project in the works?

KM: Yes, I’m working on a second book for Delacorte, which is also a standalone YA in the suspense/thriller vein.

TL: Thanks so much Karen, and congratulations on a fantastic debut! 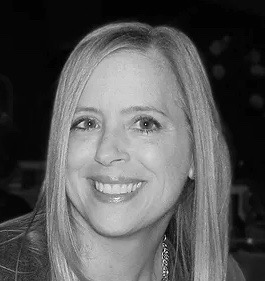 Karen McManus is a marketing and communications professional who also writes Young Adult contemporary and fantasy fiction in Cambridge, MA. A member of SCBWI, she holds a bachelor’s degree in English from the College of the Holy Cross and a master’s degree in Journalism from Northeastern University. Which she has never, ever used professionally.