Sometimes a novel comes along that gives profound and eloquent insights into the nature of the human condition. One that makes you ask questions like: What is the good life? What does it look like? Does it even matter?  Sometimes that novel also has a thrilling plot. In One More Day, Kelly Simmons delights us with a psychological thriller that is both plot and character driven.

Carrie Morgan lives with her husband in the affluent suburbs of Philadelphia, and self-identifies as a WASP.  On the surface, Carrie has what most would call “a good life,” but do not be deceived.  Simmons is a master of multilayered characters and nothing is quite as it seems.

The novel begins with a simple, but harrowing, premise. 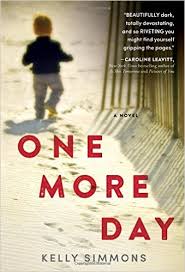 When Carrie Morgan stops at Starbucks after her toddler’s swim class at the YMCA, something terrible happens.  While digging through her purse, looking for coins to feed the meter, her beautiful baby boy disappears.  Taken without a trace.  For the next 15 months people talk and they stare.  Why didn’t she lock the door? Did she not hear anything?

The novel’s initial incident shatters Carrie and her husband’s carefree life and reshapes the rest. So, they start the process of learning to live with it. To adjust.

But Carrie Morgan no longer belongs with other young women like herself.  She belongs somewhere else.

“In church, closer to the dead.”

“The church was where she belonged.  The women there weren’t like the young teachers and young mothers at school.  They didn’t believe anymore in perfect outfits, perfect homes, even perfect afternoons.”

As far as questioning the human condition goes, this is a game changer.  The good life no longer exists.

She prays for one more day.

Fifteen months after her child is taken, he reappears.

But he looks the same.

The police have questions.

Have I said too much? Nope. This is just the beginning of the novel.  It’s where the wild ride begins and what moves it forward is written on the back of the book’s jacket.  In prominent, bold red letters: 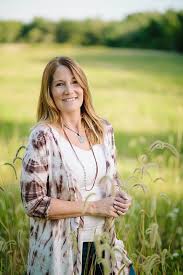 Maribel Garcia: Hi Kelly, thank you so much for sitting down with Book Club Babble for this interview. One More Day is set on Philadelphia’s Main Line.  Do you live in this area? If so, are there benefits to setting your story in a familiar place?  If you do not live here, was there a reason for picking this area as the setting?

Kelly Simmons: Yes, I have lived on the Main Line for over ten years — I lived in Chadds Ford before that, but I was born outside Chicago and moved to California in my teens, then bopped around a ton of places — Lousiville, Washington DC, Pittsburgh.  Spent a ton of time working in New York.  I mention this to demonstrate that I’m not from Philadelphia, truly, at all.  I was a vagabond until I had children, with only enough possessions that would fit in my car.  I’m a true outsider here, and find the area endlessly fascinating.  The family dynamics, the country clubbyness, the wealth, the lack of diversity– it’s very different from where I grew up.  It’s lovely and there are terrific people here — there’s no denying that.  But it’s different. I went to a high school that was about half African-American and Hispanic kids.

the main character was a woman who was trying to reconcile motherhood and marriage with the fact that she was, once, a very successful career woman. In One More Day, Carrie Morgan’s character also wonders if staying home is worth sacrificing a higher standard of living and self-autonomy. Many new mothers face the new mom dilemma: stay home or return to work.  What has your own personal experience been with this dilemma? If it was a dilemma at all.

Kelly Simmons: I love this question! For me, I always worked at least part-time. It was hard to juggle it all, and there were some ridiculous afternoons where I was breast-feeding while on a conference call, or wishing my kids napped longer so I could finish writing the chapter!!  My problem was — although I love spending time with my kids and dancing and coloring and running around the playground with them — I loved all that kind of stuff —  I didn’t love a lot of the other home-based activities, like cooking, decorating, gardening, or, god forbid, cleaning and my least favorite, grocery shopping.  The stay-at-home package includes too much stuff I hate and want my husband to do!  Oh, that, and I like MONEY.  I need money!

Maribel Garcia: Are you a full-time or part-time writer?  How does that affect your writing?

Kelly Simmons: I still work as an advertising consultant, so my writing has to ebb and flow around the dynamics of those other deadlines and needs.  It usually works out just fine, but sometimes all the book events and book club visits overlap with lots of advertising meetings and production — like now!  And when that happens, there’s a lot of nights and weekend work.  But that’s the reality for anyone who has a job –there’s overtime, there’s seasonal busyness, etc.

Maribel Garcia: As a mother, reading material that has to do with our worst nightmare is very anxiety inducing.  I think that I would not have been able to read the novel if my girls were not in their teens.  Yup, I’m a wimp.  Parenting is so hard and the situations that Carrie found herself when her child disappears are very relatable.  Personally, if my child went missing while I was stopping for my ritualistic cup of coffee I would kill myself. Any reason why you chose this very familiar ritual as the scene of the inciting incident?

Kelly Simmons: I find the rise of “coffee culture” and the success of Starbucks in particular, to be so interesting to the parenting dynamic. I remember vividly the afternoon coffee ritual (with kids in strollers clutching juice boxes) — it was important to take a break. It was vital.  That afternoon coffee meant the world to me.  (And let’s face it — caffeine is addicting. We haven’t even begun to face that as a society!)   So yes, I chose that ritual carefully, to fill Carrie with regret and guilt.

Maribel Garcia: Do you remember where you were when you first got the idea for this book?  Like, were you getting a latte at Starbucks or leaving the Y?

Kelly Simmons: Haha, no, it’s so boring, I was in my living room.  Sub plots and plot twists and smaller revelations often occur to me in odd places, when I’m mulling things over, but big things tend to happen in the living room!

Maribel Garcia: Spoiler Alert. Your work has been classified as Popular Women’s Fiction and Thriller.  With One More Day you could easily add Psychological Thriller and Paranormal to your resume.  Would you agree with these classifications? Why or why not?

Kelly Simmons: Well, yes and no.  Because One More Day is not a traditional paranormal novel, or crime novel at all.  I think all of my books are psychological thrillers in some ways.  But they don’t really hew to that tradition either.   My first novel was thought of as a literary page turner, and I think that’s appropriate. That’s how I see myself, even though the marketing is more “page turner.”  People at book clubs always say they are surprised by some of the lovely writing — they underline a sentence or a paragraph and tell me how they like it.  I think they are surprised because the book/cover wasn’t marketed for them to expect it, you know?  It’s a treat.  LIKE STARBUCKS.  🙂

Maribel Garcia: Is there a question you wish that someone would ask about your book, but nobody has?

Kelly Simmons: I always want someone to ask me who my favorite character is — because I think they would be surprised to learn that it is John, Carrie’s mysterious, controlling husband.  Writing his character and making his borderline-criminal actions believable was a true challenge for me.  It’s also fascinating to me that my editors’ favorite character is Carrie’s high school boyfriend, Ethan — who is, shall we say, NOT a hero.  Not at all.  Another challenge, and I am proud of how I developed them both.

Maribel Garcia: Kelly, once again, thank you so much for sharing your writing and for doing this interview for Book Club Babble.