Here at BCB, we joke about the over use of the phrases fast-paced and page-turner in book reviews. But Stasi’s bullet train of a novel Book of Judas earns these descriptors as if they’d never been employed before. Her intriguing story revolves around the unexpected recovery of critical pages from the Gospel of Judas. The manuscript’s lost section is dangerous, coveted by many, and has the potential to change the world for better or for worse.

Protagonist Alessandra Russo’s world begins to disintegrate from the moment the powerful ancient pages enter her life. The freedom of her best friend Roy, the safety of her child, and her own mental health and sanity are all threatened as she races to unlock the secrets of the manuscript before it gets into the hands of her would be enemies. BCB is thrilled for the opportunity to discuss the second novel in the Alessandra Russo series.

Amy M. Hawes: In your introduction, you describe how serendipity played a central role in the creation of the Book of Judas. Has your writing career been guided by these sort of external forces or is this book an exception?

Linda Stasi: My life has always been, if not guided, then definitely influenced by serendipity. I manage often to be in a place when news breaks or just happen to know a person who makes news. I always follow my instincts and recognize—and thank—the serendipitous hand guiding me.

But The Sixth Station and Book of Judas were something else again. I was getting hit over the head constantly with signs and clues out of nowhere for both books.

AH: Another question about the introduction. The last line of it reads, “The story is fiction, but the truth isn’t.” This statement intrigued me. Do you mind elaborating without spilling too much of the storyline?

LS: Thank you for asking that. The nearly 2,000 year old Gospel of Judas is an actual codex that was discovered in a cave in al Minya, Egypt in the 1970s. The leather-wrapped papyri had then been passed around, lost and found and lost again on the black market. It finally ended up in a safety deposit box in—take a breath here—Hicksville, Long Island where I’d grown up. A black marketer had tried to sell it in New York and when it didn’t work he and relatives in Hicksville put it in the bank vault, where it rotted for 17 years in the VERY SAME BANK branch where I’d had my first-ever bank account and where my parents had theirs.I didn’t know this until I started investigating the story! But I spent years researching it and I quickly came to discover what missed most of the scholars. This is the only gospel in which Jesus imparts esoteric and secret knowledge about the universe to a disciple. All the other accepted gospels are a retelling of events only. I came to believe through research that Judas was not the betrayer, but the beloved of Jesus. He carried out the wishes of his Lord because, without crucifixion, there could have been no resurrection.

AH: Alessandra’s best friend Roy is a sexy gay firefighter. Are you making a statement of inclusiveness here during a political time when not all are equally welcoming or does his role simply fit the story or both?

LS: My best man at my wedding is gay and I stood up for him when he got married. I didn’t really think about inclusiveness or anything really. Roy is an amalgam of several of my male friends—some gay some not. I like people who are complex and Roy is one of the most complex characters in the book.

AH: I love the concept that secret keys must be used in a specific way to unlock the stolen pages from their cylinder. Did you have fun figuring out how to make this part a believable and seamless part of the story? 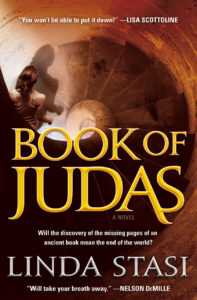 LS: Figuring it out was about as much fun as the measles. It was torture! Every time I’d think I had it, I’d wake up the next day and know, just know, it wasn’t right. It took a very long time to figure out how to make this believable. It came to me when I remembered as a little kid, that there were these brass tubes in Macy’s that they used to transport the receipts from floor to floor. Bingo!

AH: The way you drop sentences at the end of chapters to foreshadow upcoming plot twists is reminiscent of a classic sort of whodunit detective story. Did you grow up reading these stories? What inspired you to create the Alessandra Russo character?

LS: I was desperate to be Nancy Drew as a kid. I devoured every book. But interestingly, as I grew up, I stopped reading fictional mysteries and turned to true crime for my mystery fixes. As for Alessandra Russo, I didn’t have to look very far. They say write what you know. She is me—but unlike life, I wrote her with 20/20 hindsight knowing when she was heading for trouble. But if I hadn’t gotten into tight spots, she would have been a dull character indeed.

Also, I was getting very tired of women in fiction either being blond, busty action figures or “girls.” Do you notice how many books are titled “Girl” something or other—yet those “girls” are grown women. Enough with the fantasizing and infantilizing of women!

AH: Researching for this book must have been fascinating. Tell us about your favorite discoveries along the way.

LS: How do you beat visiting a distant relative of my husband’s, a mystic, in the desert of Israel and being taken into his basement, which turned out to be a 3,000-year-old burial tomb!

My research also led me to decode what I believe is the secret message that Jesus imparted to Judas about the origins of life. Yeah. That was pretty cool.

AH: Do religious groups know about your novel? If so, how has it been received?

LS: I understand that my publisher has gotten some kickback from religious bookstore buyers who haven’t read it that they think it’s a devil-worship book! They should read it to discover it’s the exact opposite. But interestingly, after I’d written The Sixth Station and thought the Catholic Church would come after me with pitch forks, I did the radio show of a Catholic monsignor who said, “You taught me things about my religion that I didn’t know.”

AH: Without revealing the conclusion of the Book of Judas, suffice it to say that it contains a very surprising twist. Did you know how the novel would end when you started to write?

AH: Can we expect another Alessandra Russo novel soon? What other projects do you have lined up?

LS: I’m not sure Alessandra is ready for another adventure right now. I have to wait for some signs to point me in the right direction. But, I have an idea for a book that is contemporary women’s fiction, not a religious thriller.

Yeah, all well and good. However, for my last birthday my husband and I did trek Bolivia and Peru visiting all the sites that simply couldn’t have been built by humans…sounds like adventure keeps calling. 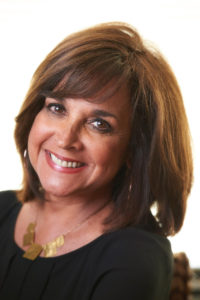 LINDA STASI is an award-winning columnist for the New York Daily News and was an on-camera host on NY1 Spectrum TV 24/7 news channel. Named one of 50 Most Powerful Women In New York, Linda has appeared on such programs as The O’Reilly Factor, The Today Show, The View, Chris Matthews, CBS Morning Show, and Good Day New York. Linda was a finalist for the Mary Higgins Clark award for her first novel, The Sixth Station. For more, visit lindastasi.com.

ABOUT BOOK OF JUDAS

New York City reporter Alessandra Russo is pulled into yet another intrigue; this time her friend Roy inherits a strange religious manuscript, tightly protected in a mysteriously locked tube.

Do the lost pages reveal a secret that will challenge Christianity’s very belief about the creation of life, or even the power to unleash Armageddon? What if such explosive documents fell into the hands of modern-day terrorists, dictators, or religious fanatics? Can Alessandra crack the code and learn what the Gospel of Judas is truly saying to the faithful?

During her investigation, Alessandra is plunged into a dark world of murder, conspiracy, sexual depravity, and most importantly, a race against the clock to save her own child.