Caging the Merrow, the anticipated third and final installment of Heather Rigney’s dark fantasy series released this December. The stories feature a drunken funeral director, a vicious mermaid, and fascinating tidbits of Rhode Island history. Heather mixes her signature snark with the monstrous and macabre to craft a suspenseful, page-turning series finale. I’m so pleased to welcome author Heather Rigney back to BCB today! 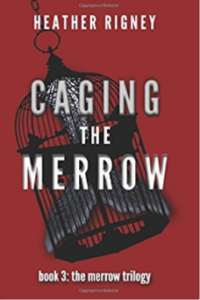 Tabitha Lord: Nothing says “dark historical fantasy” like a centuries old family of man-eating, bloodthirsty mermaids. Where did this idea come from?

Heather Rigney: When you really think about the concept of mermaids, you think back to the sirens of old, beautiful creatures that sat on rocks, singing and combing their hair, luring sailors to their deaths. I thought, Why? Why would these creatures lure men into a watery grave? Spite seemed pointless. Then I thought, Everyone’s gotta eat, right? The idea of a female predator really appealed to me. I ran with it.

TL: I was hooked on this series from the start, and I think it was Evie’s voice that did it. She’s a messy, insecure, alcoholic, working-as-a-funeral-director mom trying to figure out this whole parenthood thing. Yet she rises to the occasion when danger strikes. I love her and I love that she isn’t the typical “heroine.” Talk a little about how Evie was born.

HR: Evie is truly a hot mess–a blistering stew of a hot mess bubbling over with issues. I adore her. She is me, unchecked. If I let myself go, I would be her. I wouldn’t care about my looks, my child, nor my career, and I would definitely be drunk most of the time. At some point, I learned to be a disciplined grown-up and, for the most part, I keep it together.

When I first wrote about Evie, I made her a displaced, new-to-the-area mom trying to navigate a foreign neighborhood with a child. She was SO BORING! I needed to spice her up. My biggest inspiration for Evie was Sookie Stackhouse, not the way she looked by any means, but the way she was accessible. Sookie was a small town waitress who liked to sunbathe and paint her toe nails. I loved that about her! I also loved that she had a quirk. That poor girl could read other people’s minds and it was a nuisance! I felt for her! I thought, if I could take my boring character and give her some quirk, that would add the spice my story lacked. So, I made her an alcoholic funeral director with a foul-mouth. I made her the woman no one really wanted to be. However,  I believe that deep inside, we all fear that we might slide into Evie-dom at anytime. That’s relatable to most women, that fear of not being the best mom we can be. From that point, Evie became an instant anti-hero.

Sure, some people despise her, but I often wonder if their Evie-hatred stems from a place of self-loathing. But that’s a whole other discussion …

TL: When writing a fantasy story that’s set mostly in the real world, it’s the writer’s job to ease readers into the magical aspects so that the experience doesn’t feel jarring or forced. Can you talk about how you do this?

HR: The fantasy (or any fiction) writer needs to think of themselves as an amusement park designer. You are creating an experience for your reader, a fun experience. People read for pleasure, they want to disappear from their own world and go someplace else for awhile. If you start to think of yourself as an amusement park designer/writer then you will need to think of the needs of your customer. They want to have fun. They want to forget about their mortgage/job/kids/significant other/lack of significant other. They want to let go. BUT! They need to trust you. They need to know that you are not going to let them down. You won’t let them get hurt, or be bored, or at any time remember the things they are trying to forget.

Therefore, it’s your job to hold their hand and make an experience that is: familiar, yet different; safe, yet thrilling; horrifying, yet fun. It’s a tall order. I like to take the known world and tweak it just a bit. I like to research biology, ecosystems, maps, history, folklore, and mythology. I like to know exactly what people were wearing in a certain time and place. I want to know exactly what the weather was like in January in Belarus. I want to know exactly how a fish takes in oxygen to breathe. I take all this research and I put it together in a way that works for the world I chose to create.

By the time my reader encounters a scene with a mermaid, they really believe that mermaid exists because I’ve sprinkled subtle hints and bread crumbs up to that point, making a world where, yes, a woman who changes her body into a fish-like creature is completely possible. I’ve created an environment where it’s plausible by building a foundation of sensory experiences that are relatable and familiar all along the way.

TL: How did writing the third book in a series differ from writing the first? How have you changed as a writer?

HR: I often feel like a charlatan when I write. The thoughts, and they are punctuated this way, often go like, “Who. Do. You. Think. You. Are? You think you are a writer? You don’t know what the hell you are doing.”

It got worse while writing the third book, but I had an answer for my self-doubting side. “You think you don’t know what you’re doing? So what? Who cares? Just write the damn thing. See this scene here? Write it. Don’t think, write.”

And I did! I would just sit down and write, and not overthink everything. The words flowed and I thought, this is probably crap. But when I sent it to my editor, she thought it was good! I think I’ve learned quite a bit in terms of style and flow. I also understand the questions I need to ask myself subconsciously as I write. Here are some examples: Is this necessary towards story or character development? Am I showing or telling? Did I over-capture or under-capture the details? Does every chapter end on a cliff-hanger? Do I know where I am going with the story-line? Do I have an end game?

TL: You’ve spent years with these characters. Are you ready to let them go and move on?

HR: Hell. Yes. I really feel that I have spent more than enough time with them and that we are ready to part ways. I taught seventh and eighth grade for thirteen years. I would see a new batch of students, about seventy at a time, every forty-five days. I learned how to make relationships fast and then let them go. I don’t feel any different about my Merrow family. They belong to the world now and I hope they thrive.

HR: In 2009, I started a story about infertility, teenage pregnancy, intertwined with a fairy tale. I put it down and always thought I would go back to it…some day. Then, a few months ago I read an article where an agent mentioned that she had been receiving too many infertility manuscripts and I thought, well, forget about that. Guess I’ll let that story go. But recently I thought I would move forward with it anyway. After all, who am I to let one agent dictate my dream project? I’m going to write the damn thing and shop it around. If I’ve learned anything over the process of Merrow writing, it’s this–anything is possible. Hell, the impossible sits beneath my name on my business card. If you look it reads, Underwater Fire-breather.

TL: Heather, it’s always a pleasure! Thank you so much and we’ll catch up live tomorrow night.

About the Author: Writer, artist, and underwater fire-breather, Heather Rigney likes to make stuff. Stuff with words, stuff with paint, stuff that’s pretty, and stuff that’s not. Heather’s stories reflect a dark, gothic childhood spent in the woods of northern Rhode Island. At the moment, she resides in Pawtuxet Village, RI with a family (both chosen and created) that she adores. Heather’s novel, Waking the Merrow, won the Wishing Shelf Gold Award for Adult Fiction in 2016.