Aspiring author Emmy Danvers is at work on her romance novel in Starbuck’s when a strange old man approaches her with a warning. But before Emmy can make sense of it, he knocks her to the ground and dies on top of her! Worse, he’s slipped a mysterious digital tablet in her pocket, and it seems he may have taken a bullet for her. Thus begins Marni Bates’s young adult thriller Dial Em for Murder

. Filled with colorful characters and a fast-paced plot, Dial Em is a smart thriller with a healthy dose of humor.

Tabitha Lord: I love young adult books and one of the reasons is the narrative voice. When a writer gets it right, the characters stumble between awkwardness and grace, angst and confidence. As an adult, I remember very well how it felt to be that age! Emmy, the protagonist of Dial Em for Murder

, has a perfect young adult voice. She’s funny, snarky, and lovable, and just the right blend of strength and insecurity. When and where was Emmy’s character born?

Marni Bates: Thank you so much! I spend a fair amount of time in coffee shops (*cough* maybe too much time *cough*) and some rather eccentric people have approached me over the years. So I loved the idea that a stranger could throw you into a world of danger and mayhem when all you’re trying to do is sip your drink and write a book. Emmy’s personality just sort of came to me. We both have a tendency to retreat to fiction when real life gets rocky. And we both want to be strong in the face of adversity, but sometimes struggle to find our courage. And we both have best friends that we would do anything to protect. I think that common ground is part of the reason that I loved writing from her perspective.

is a young adult mystery/thriller with some mature themes, including, obviously, murder. How did you strike the correct balance between keeping the book age appropriate and dealing with the violence?

MB: I am the easiest person to frighten. I was unofficially banned from a film club in college when we watched Rear Window and I nearly hyperventilated. It’s still one of my all-time favorite movies. It always freaks me out. So I trusted my instincts when it came to balancing the mature themes. Am I panicking? That means it will probably appeal to a thirteen year old. I wanted it to be suspenseful, without delving into gratuitous death/gore/ickiness. I also think Emmy’s snark helps balance out the darkness with some levity.

TL: We meet Sebastian when he offers Emmy a scholarship to his private boarding school, suggesting she’ll be safe there. Whether he’s Emmy’s would-be savior, or has some ulterior motive, Sebastian is such an interesting character. He’s brash, confident, and the reader suspects, dangerous. He feels much more mature than his seventeen years. How fun was he to write?

MB: He was so much fun to write! He has a dark, twisty past that I can’t wait to share with my readers. Sebastian has a really interesting moral compass. He doesn’t want to debate right and wrong because it doesn’t matter to him. He is far more focused on keeping the handful of people he cares about safe and seeking revenge on anyone who might wish them harm. He won’t let anyone get in his way either. Not even Emmy…

TL: Which character do you identify with most? And, who is your favorite?

MB: I think I identify most with Emmy. We share a similar sense of humor and a tendency to dream up unlikely scenarios when we’re under pressure. Her parental frustrations were also created as I worked through some issues in my personal life. That said, I think all my characters have a little piece of me in them. Kayla’s enthusiasm. Sebastian’s deep love for his grandfather. Audrey’s willingness to show up in the dead of night to help a friend. I love them all! I don’t think I can pick a favorite.

TL: I know you wrote a memoir at age nineteen. Can you talk a little about the difference between writing fiction and non-fiction? Is one more satisfying than the other? More challenging?

MB: I find fiction far more creatively satisfying. I can use snippets of my fears and insecurities and build something brand new. I always learn something about myself in the process, too. That said, writing my autobiography was an incredible experience that I will always treasure. It was a strange kind of immersion therapy. I spent all four years of high school ashamed of my trichotillomania, which is an obsessive compulsive/anxiety disorder that involves pulling out your hair/eyelashes/eyebrows, etc. The thought of discussing it with anyone made me want to vomit. And then I landed a book deal to tell the whole freaking world!

Revealing all those insecurities was the scariest thing I think I’ve ever done. But receiving letters from girls who read my autobiography and feel less alone? It means the world to me. It makes every awkward, painful moment feel like it had a larger purpose.

TL: I’m always interested in another writer’s process. Are you a steadfast outliner, or do you make it up as you go?

MB: I am a doodler! I create elaborate bubble art that involves scribbling down names and character traits and potential conflicts and magazine clippings and somehow my brain translates that mess into a novel. When I reach the halfway point of my first draft I usually have a pretty clear sense of where I’m going with the story, but the killer in Dial Em for Murder was originally supposed to be someone else! That character gave me nightmares. I played out the big confrontation with Emmy over and over in my head. It worked. It totally worked. And then when I got to the scene…nope!

I’ve learned to leave room for my characters to surprise me. It keeps me on my toes.

TL: Clearly this book requires a sequel! Did you plan it that way from the start, or did the story grow as you wrote it.

MB: I knew I wanted a sequel. As soon as Emmy popped into my head, I wanted to spend a lot of time with her. There is so much trouble waiting around the next corner for her with that damn Slate. And Sebastian. And Ben. And the rest of the gang. *evil author laugh*

TL: Are you working on that sequel now?

MB: I have a few projects in the works right now and that is definitely one of them!

TL: Any other interests you want to share with us?

MB: I love to travel! I’ve been incredibly lucky to explore some stunning places. A book tour in Hungary and Romania sparked an interest in hiking for me – which is kind of surprising since I got lost on a mountain in Brasov, Romania and started freaking out at the possibility of stepping on a snake! I love hiking around Portland, Oregon, and have a long list of trails I want to explore next. And yes, I’m still afraid of snakes. 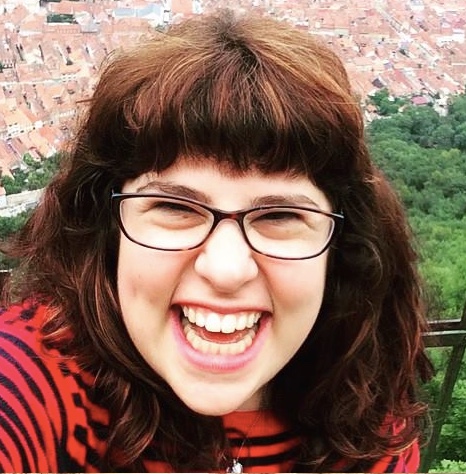 Marni Bates was first published at age nineteen, when her autobiography, Marni, was selected for the New York Public Library Stuff for the Teen Age 2010 list. Her first series, Awkward/Decked with Holly/Invisible/Notable/Awkwardly Ever After (Kensington Teen), has been optioned by the Disney Channel and translated into several languages. You can read more about Marni at www.MarniBates.com and follow her on Twitter @MarniBates. You can purchase her book here