Sarah Adlakha’s sophomore novel, Midnight on the Marne, is a powerful story of love and sacrifice. Set predominantly in occupied France during WWI, the novel follows the interwoven lives of a French nurse doubling as a spy and an American soldier. Adlakha’s gorgeous prose, her ability to balance tension and suspense with emotional depth, and the novel’s alternate timeline twist make Midnight on the Marne a top pick for 2021! I’m so pleased to welcome Sarah Adlakha to BCB today.

Tabitha Lord: Why did you choose to set the story during World War I?

Sarah Adlakha: I hate to admit it but setting the story during World War I wasn’t really intentional. When I decided to tell the 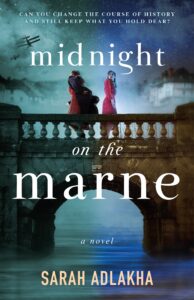 story of George from my first book, She Wouldn’t Change a Thing, I had to be consistent with his character, and since he’d been through WWI, I didn’t have the liberty of changing that part of the story. It was a daunting task initially, but now I’m so grateful that I wrote myself into that corner because I absolutely fell in love with the era.

TL: How much research did it take before you felt confident diving into this part of history?

SA: So much. I spent at least six months researching everything I could get my hands on pertaining to WWI before I wrote even the first word. I read books about battles and commanders and strategies. I learned all about the weaponry that was used during the war, where and how the Americans trained before being put on the front lines, how French civilians lived – and died – during that time. Not only from bombings and fighting, but also from illness and disease. But even after all that research, there were still countless searches and questions during the writing phase as well. I hope I’ve done it justice, but I imagine I could research this era forever and continue to learn something new each day.

TL: Was the idea for an alternate timeline part of the story all along, or did the inspiration hit while you were writing?

SA: It was always part of the story. Since George Mountcastle, who is one of the main characters in Midnight on the Marne, was in my first book, and since his story about traveling back in time had been touched on, I knew the exact path my book would take before I started writing it.

TL: Can you talk a little about your transition from psychiatry to writing?

SA: Sometimes it’s difficult for me to admit that it’s a transition. When I started writing, I was simply taking a break from psychiatry. I had every intention of returning to it, but then life just took some unexpected turns and before I knew it, I was working from home while homeschooling my twin daughters through middle school and eventually adopting my third daughter from India. And when my first book sold in a two-book deal, I suddenly became an author. I don’t know if I’ll return to practicing psychiatry in the future, but I certainly take my training and experience with me when I create characters and play with relationships in my books.

SA: I am very excited about book 3. It is an historical fiction novel about a nurse set in the Pacific during WWII. There are no speculative elements to this book – straight historical fiction – and I’m about halfway through the first draft after at least six months of research. This will be my first book with no time travel/alternative timelines.

Sarah Adlakha is a native of Chicago who now lives along the Mississippi Gulf Coast with her husband, three daughters, two horses, and one dog. She started writing fiction shortly after retiring from her psychiatry practice. Her debut novel, She Wouldn’t Change a Thing, was a CNN most anticipated book of 2021. Midnight on the Marne is her second novel.